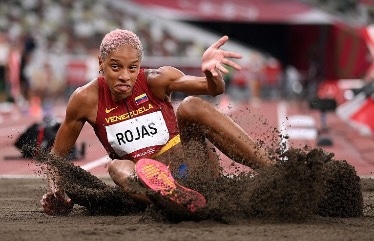 Rojas came first in both of her groups, beating Ana Peleteiro of Spain, who finished second with 14.62 meters, and Thea Lafond, who finished third with 14.60 meters. Although Rojas had two more chances, she chose not to opt for them as she had already qualified. 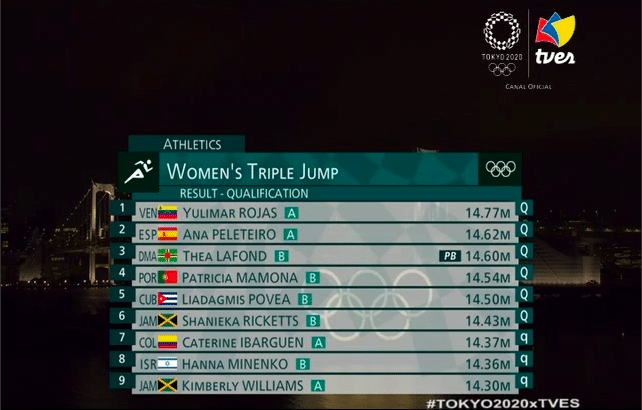 Rojas came to Tokyo as leader of the World Athletics ranking, where she has held her position for more than 100 weeks, having the second best record of all time: 15.43 meters. Rojas won the silver medal at the Rio 2016 Olympic Games with a mark of 14.98 meters, behind Colombia’s Caterine Ibarguen, who won gold with 15.17 meters.

The triple jump final will be held on Sunday, August 1, at 7:15 a.m. Venezuela time.

Here is the video of Rojas’ jump at the semifinals:

Alberto Mestre, for his part, achieved a time of 21.96 seconds in the men’s 50-meter freestyle competition, qualifying for the semifinals that will take place on Saturday, July 30, at 10 p.m. Caracas time.

This is the video of Mestre’s semifinals qualification:

Meanwhile, Venezuelan swimmer Jeserik Pinto, who participated in the women’s 50-meter freestyle on July 30, finished third in her group with 25.65 seconds. However, her time was not enough to qualify.

This is a video of her participation:

Venezuelan athlete Ahymara Espinoza also participated, on July 30, in the shot put competition, achieving a throw of 17.17 meters, which was also not enough to qualify.

Featured image: Yulimar Rojas in her triple jump event in which she cleared 14.77 meters, qualifying for the final with first place in the semifinal. Photo from Alba Ciudad.