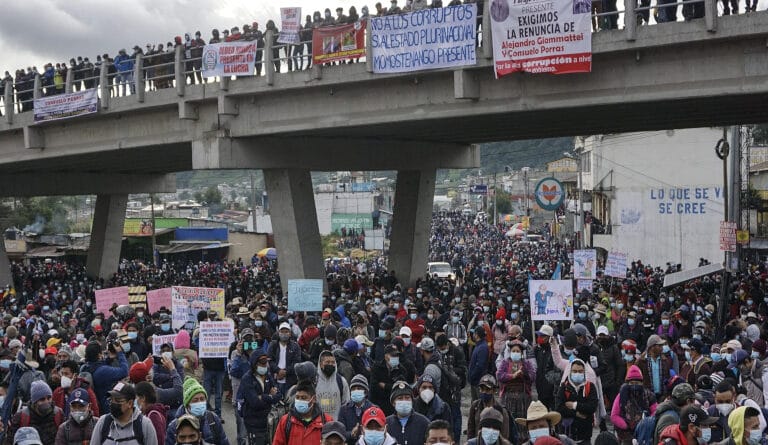 On Thursday, July 29, at least 20 roads in various parts of Guatemala were blocked by protesters demanding the resignation of President Alejandro Giammattei and Attorney General Consuelo Porras, for alleged acts of corruption.

The demonstrators are demanding “the resignation of Alejandro Giammattei due to his incapacity and mismanagement of the country,” protester Ana Pardo, participating in a blockade at Cuatro Caminos, some 200 km to the west of Guatemala City, told AFP.

“Honestly, it is worth protesting, and we are here with our utmost conviction,” added Pardo. “No one is forcing us, we have come because we want our country to change.”

The protests are the result of mismanagement of the COVID-19 crisis by President Giammatei, who is a doctor by profession. The lack of COVID-19 vaccines and allegations of corruption are also driving the protests. The protesters are also against the Attorney General’s dismissal of the anti-corruption prosecutor, Juan Francisco Sandoval, and for not investigating alleged arbitrary actions of President Giammatei.

Sandoval was removed from his post last Friday, July 23. According to Attorney Porras, she had lost confidence in him. This decision has been criticized by the United States and some international organizations and also by some Guatemalan groups. However, such critiques seem all form and no substance, coming from the country where in 1954 the legitimate government of Jacobo Árbenz was overthrown by the military, backed by the US to preserve the interests of the United Fruit Company in Guatemala.

Fearing a possible threat to his life, Prosecutor Sandoval has now left Guatemala, and there have been demonstrations in support of his anti-corruption efforts and demands for the president and the prosecutor to resign.

In the Guatemalan capital, smaller demonstrations have been held in different areas of the city.

Another protester in Cuatro Caminos, José Santos, stated that “We [the protesters] are calling for the resignation of Mr. Giammattei for all the arbitrariness he has committed, and also against Ms. Porras for her non-transparent firing of prosecutor Sandoval.”

On July 27, President Giammatei announced that there would be new negotiations to acquire vaccines from US firms Johnson & Johnson, Moderna and Pfizer, after having canceled previously negotiated purchase of half of the 16 million doses of Sputnik-V that were to be acquired from Russia, supposedly due to a delay in delivery.

RELATED CONTENT: There are No Mass Migrations Without US Meddling and Militarism

The negotiations with Russia had provoked criticisms due to the supposed secrecy of the agreement, since the president allegedly paid $79.6 million to the Russian Direct Investment Fund (RDIF) for eight million Sputnik V doses. However, so far only 550,000 doses had been received.

Guatemala has reported more than 355,000 COVID-19 cases and over 10,000 deaths since the beginning of the pandemic.