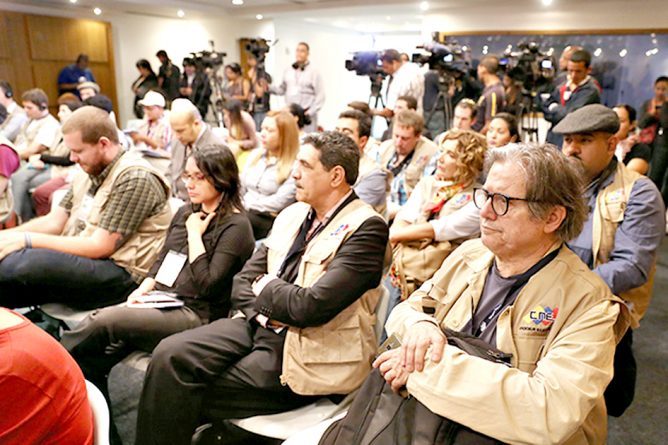 Tibisay Lucena, president of the National Electoral Center (CNE), reported that on “Tuesday, December 4, the CNE will take the schools that are polling centers and on Friday 07 the election boards will be installed in each voting poll.

“During a press conference, Lucena, also added that “board members must go to the preparation courses.” On Sunday December 9 will be elected 2,459 principal aldermen, with their respective alternates. Of that total, 1,704 are nominal positions [elected by their own name], 686 per list [elected from political parties lists] and 69 will be elected by indigenous organizations and communities.

Tibisay Lucena also offered statements about the pre-dispatch audit process to the voting machines, regarding the elections of municipal councils on December 9th.

The electoral timetable for the elections of December 9 (9D) of municipal councils has been met to date at 85%, reported.

“So far we have already executed 85% of the electoral timetable. All the activities that have to do with the equipment, with the machines that have already finished what is the production of the material of the voting machines are already going to the regions, “she said.

She also confirmed that all the political parties have attended each and every one of the audits and 2,459 positions will be elected for these elections of aldermen and alderwomen.

On the other hand, ensures that logistics coordination has been established with all state institutions and companies linked to the event, such as the state telecommunications company Cantv, Petróleos de Venezuela (Pdvsa), the Ministry of Education, the National Electric Corporation (Corpoelec) and the Operational Strategic Command of the Bolivarian National Armed Force (Ceofanb).

On Sunday December 9 will be electing 2,459 major aldermen, with their respective alternates. Of that total, 1,704 are nominal positions, 686 per list and 69 will be elected by indigenous organizations and communities.

She also indicated that the international observers for the municipal elections next December 9, will arrive in the country between Monday and Tuesday. She added that “as an international accompaniment it is a small delegation from the Ceela (Council of Electoral Experts of Latin America)” In turn, Lucena, said that for the CNE it is excellent news that all political parties meet the requirements of the electoral body .

Finally she reminded the “organizations with political ends must comply with the accreditation of witnesses.”