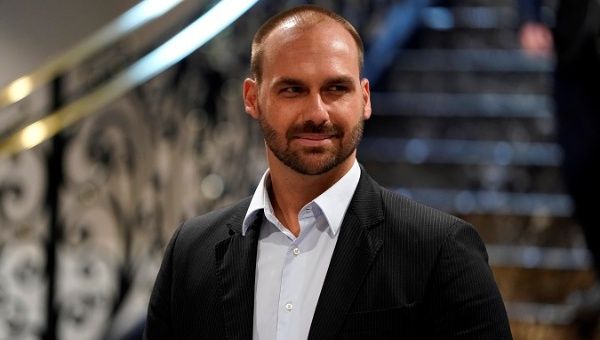 A number of Brazilian senators expressed their rejection of Eduardo Bolsonaro’s appointment as Brazil’s Ambassador to the United States.

The U.S. administration announced on Thursday that they have formally endorsed Eduardo Bolsonaro’s nomination to the Brazilian embassy in Washington, as reported by Folha de Sao Paulo.

“Besides being an act of nepotism, it is the appointment of someone who will lead a strategic sector of the country’s foreign relations [by assuming] a view in which Brazil must subordinate itself to the U.S. geopolitical and economic interests,” local media Brazil 247 commented on Friday.

“In addition to not gathering the credentials for the post, as many Itamaraty diplomats have already pointed out, Eduardo Bolsonaro, who is a supporter of Donald Trump, has already publicly demonstrated his commitment to the U.S. president re-election in 2020.”

According to the usual procedure, the far-right President Jair Bolsonaro will nominate now his son for the position before the Foreign Affairs Commission of the Senate.

Subsequently, if this commission accepts the nomination, his 35-year-old son must receive the support of 81 lawmakers before becoming Brazil’s ambassador to Washington.

The overwhelming majority of Brazilians are against senator Eduardo Bolsonaro’s appointment to be Brazil’s ambassador to the U.S.” The Brazilian Social Democracy Party (PSDB) senator Plinio Valerio, who supported former captain Bolsonaro in his 2018 presidential campaign, said on Friday that he will not vote for his son because he has no qualifications, an opinion which was shared by other PSDB lawmakers. “I have a granddaughter who has been in Brasilia for two years getting ready to do [the exam to enter the diplomatic career] in Itamaraty. What am I going to tell my granddaughter? Do not study, no. Your grandfather is a senator and will try to appoint you? What example would we give in endorsing such an appointment,” Valerio said. RELATED CONTENT: National Guard Seized Weapons Arsenal in Tumeremo, Near Brazil Border Eduardo Bolsonaro, a Social Liberal Party (PSL) federal lawmaker, is the South American representative of “The Movement,” a European-based organization which supports right-wing politicians and was founded by Steve Bannon, the former White House Chief Strategist.

The opposition leader at the Senate, Randolfe Rodrigues, a member of the Sustainability Network party (REDE), said most lawmakers will not change their position with Eduardo Bolsonaro because of the fact that President Trump has endorsed him.

“None of the senators who decided against such nomination will go back because of Trump,” Rodrigues said and confirmed that he will not support Bolsonaro’s son due to his “respect for the difficult diplomatic career.”

The REDE senator also indicated that his party will file a legal action before the Supreme Court Federal against the designation that the Brazilian far-right intends to consummate.

The Brazilian constitution states that “the nomination for public office must obey the principles of impersonality, morality or efficiency,” local analist Tales Faria explained.

“Also current norms establish that nepotism happens when a spouse or a direct-line relative is appointed to administrative positions.”