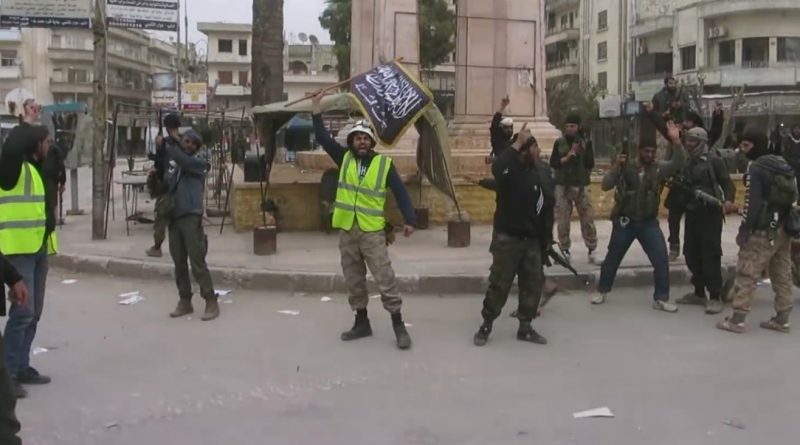 While touting his efforts to end US involvement in Syria, Trump approved $4.5 million more for the White Helmets. This group has been at the heart of the regime-change war on the country, partnering with jihadists and joining Turkey’s brutal invasion.

US President Donald Trump has approved an additional $4.5 million for Syria Civil Defense, known popularly as the White Helmets.

With close to $100 million in funds from the US and UK governments, as well as donations from Qatar, support from Turkey, and backing from wealthy private donors, this outfit has acted as a public relations vehicle for the Syrian armed opposition.

White Helmets links to extremist Salafi-jihadist groups, including ISIS and al-Qaeda, have been thoroughly documented. What’s more, the group has participated in recent Turkish onslaughts in northern Syria where Kurds and other minority groups faced ethnic cleansing.

The continued US funding is a sign that Washington’s regime-change war against Syria continues, even while Trump has partially withdrawn American troops from the country.

The White House announced the funding in a press release on October 22. The Trump White House called on “allies and partners to join us in our support for the SCD (White Helmets),” claiming the group has saved “many ethnic and religious minorities.”

But in fact the White Helmets have directly helped extremist Islamist militants and Turkish invaders who have ethnically cleansed and massacred ethnic and religious minorities.

The White Helmets – the ‘Islamic State’s fire brigade’
The White Helmets only operate in opposition-controlled areas in Syria, most of which have been dominated by far-right Islamist insurgents. Members of the organization have been filmed and photographed carrying guns and waving Salafi-jihadist flags, and have even participated in numerous public executions of citizens in this occupied territory.

The group has also assisted NATO member Turkey in its invasion and ethnic cleansing of northern Syria, collaborating with Ankara after it illegally militarily occupied the city of Afrin and kicked out its majority-Kurdish population.

John Cantlie, a British journalist kidnapped by ISIS and forced to make propaganda for the genocidal militia, referred to a White Helmets team in one such hostage video as “the Islamic State’s fire brigade.” Similarly, the Saudi Islamic fundamentalist warlord Abdullah al-Muhaysini, who is closely linked to Syrian al-Qaeda, praised the White Helmets as allied “mujahideen.”

None of these inconvenient facts stopped the organization from winning an Academy Award, getting nominated for a Nobel Peace Prize, or being portrayed by the international corporate media as benevolent humanitarian angels.

Oceans of funding from Western governments
The Grayzone’s Max Blumenthal published a detailed exposé on the White Helmets, highlighting the group’s creation by an elite London public relations firm called the Syria Campaign and a British military officer named James Le Mesurier, himself a veteran of the NATO regime-change war in Yugoslavia.

Syria Civil Defense was formed in alliance with the regime-change arm of the US Agency for International Development (USAID), the Office of Transitional Initiatives.

The White Helmets have enjoyed a flood of funding from Western governments, who have used the group as a PR weapon to turn up the heat against the Syrian government and its allies Iran and Russia.

Between 2013 and 2016, USAID donated at least $23 million to the group. The governments of Britain, France, Canada, the Netherlands, and Japan added tens of millions more to this substantial “humanitarian” regime-change slush fund.

In June 2018, the US State Department announced that Trump had approved another $6.6 million in USAID funding for the White Helmets. A month after this new round of funding, more than 400 members of the White Helmets and their families were evacuated from Salafi-jihadist-occupied territory in southwest Syria in an operation overseen by Israel.

The US State Department published a statement announcing, “We deeply appreciate Israel’s role in facilitating the transit of the White Helmets” into Jordan.

Facilitating Turkish ethnic cleansing of Syrian territory
While Israel was helping evacuate the White Helmets in the south of Syria, members of the same group were actively facilitating Turkey’s invasion and ethnic and cleansing in the country’s north.

The Syrian community of Afrin had been inhabited largely by Kurds, along with other minorities such as Yazidis and Armenians, before Ankara and Syrian Islamist insurgents embedded in the Turkish army violently expelled them. The White Helmets were directly complicit in this forced demographic change.

After two and a half years of prohibition, the #SyrianCivilDefense returned to work in the Syrian city of #Afrin to serve all Syrians. The #PYD and #YPJ closed the center and arrested the volunteers who were working there, to come back today and be with the residents. pic.twitter.com/32OHmLBvzN

On Twitter, the White Helmets promised to help “rebuild” the newly ethnically cleansed Afrin, “to restore the city to its former beauty,” and “to make the city aesthetically pleasing to emotionally help heal the people in the city.”

150 volunteers and 50 vehicles are enlisted in the campaign, to remove rubbles from the city’s neighborhoods. Following this, sights which are out of service will be restored in order to make the city aesthetically pleasing to emotionally help heal the people in the city. #Afrin pic.twitter.com/LQjYSSwrvG

The group’s involvement in the Turkish invasion and ethnic cleansing of northern Syria led the humanitarian organization Christian Peacemaker Teams to draft a letter to the White Helmets, asking why it was “working with the Turkish invading forces and their Free Syrian Army mercenaries in the Syrian region of Afrin.”

Christian Peacemaker Teams did not receive a response, so it made the letter public.

When Turkey again invaded northern Syria in October 2019, the White Helmets once again welcomed the attack. The group did not say a word about the atrocities committed by the Turkish army and embedded Islamist insurgents, including their mass executions and rapes of civilians.

But the White Helmets did make sure to repeatedly publicly criticize the Kurdish-led YPG forces that were defending their communities from the illegal Turkish assault.

Six people were killed, and 13 others were injured, after artillery shelling and rocket attacks by the YPG on the villages of Mirza, Tal Ali, and Shuaib in the eastern countryside of #Aleppo this afternoon. pic.twitter.com/LCYNBg15GZ

This pattern is far from now. While they have been aggressively marketed in corporate media as a supposed humanitarian and peace group, the White Helmets and their parent organization the Syrian Campaign have in fact openly lobbied for US military intervention and sanctions on Syria.

When neoconservative Senator John McCain died in 2018, the White Helmets honored the infamous war hawk as “an extraordinary man and politician, and a staunch supporter of peace.”

“Eight long years after President Obama’s ill-fated push at regime change, U.S. troops are still on the ground in Syria. More than half a million people are dead, hundreds of thousands are terribly injured, and millions more Syrians are displaced. It really is a nightmare of misery.

Across the Middle East, we have seen anguish on a colossal scale. We have spent $8 trillion on wars in the Middle East, never really wanting to win those wars. But after all that money was spent and all of those lives lost, the young men and women gravely wounded — so many — the Middle East is less safe, less stable, and less secure than before these conflicts began.”

Yet just the day before making this speech, the Trump White House had announced $4.5 million in additional funding for a group that has been at the center of that regime-change war on Syria.

Trump’s declaration also came in the same speech in which he announced that hundreds of American soldiers would remain in Syria to occupy the country’s oil and gas reserves, blocking the Syrian government from revenue needed to rebuild.

In May, the Trump administration also approved a Turkish shipment of US-made anti-tank missiles to Salafi-jihadist rebels fighting in Syria’s al-Qaeda-occupied Idlib province.

So while Trump publicly condemns regime change as a policy, the campaign to destabilize Syria continues directly under his watch.