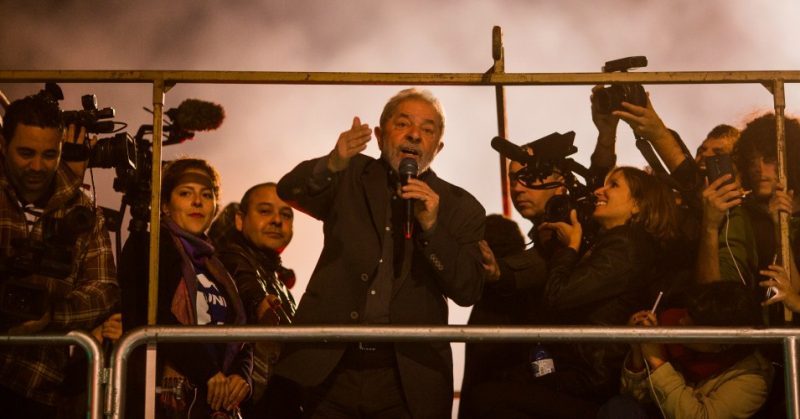 “There is no question the procedures against former President Lula are tainted by extremely serious issues when it comes to violations of fundamental guarantees and denial of one’s rights.”

A massive trove of documents leaked to The Intercept added weight to longstanding allegations that the judge and team of prosecutors behind the imprisonment of former Brazilian President Luiz Inácio Lula da Silva were motivated by a desire to prevent Lula and his party from winning the country’s 2018 elections.

“Lula should be released immediately and the courts should recognize once and for all that he has not committed any crime.”
—Legal team of former Brazilian President Luiz Inácio Lula da Silva

According to The Intercept, the documents provide significant evidence that Sérgio Moro—the judge who found Lula guilty—unlawfully conspired with prosecutors to construct the corruption case against the former Brazilian president, who polled as the frontrunner in the 2018 presidential election even while he was imprisoned.

“Overall, the documents depict a task force of prosecutors seemingly intent on exploiting its legal powers for blatantly political ends,” The Intercept reported Sunday, “led by its goal of preventing a return to power of the Workers’ Party generally, and Lula specifically.”

Lula’s imprisonment in 2018 on corruption charges cleared the way for the rapid ascent and victory of Brazil’s current far-right president Jair Bolsonaro over Fernando Haddad, who replaced Lula as the presidential candidate for the Workers’ Party (PT).

“[M]any of these documents show improper and unethical plotting… on how to best structure the corruption case against Lula—although Moro was legally required to judge the case as a neutral arbiter,” The Intercept reported. “Other documents include private admissions among the prosecutors that the evidence proving Lula’s guilt was lacking.”

Following his victory in the presidential election, Bolsonaro appointed Moro as justice minister—a move The Intercept said created “the obvious perception (real or not) of a quid pro quo.”

This is the video that should be permanently fatal to the reputation and career of Sergio Moro, now Bolsonaro’s Justice Minister. Here he angrily denies he ever did what our reporting shows he did *repeatedly*: design the cases (including against Lula) he then “neutrally” judged: pic.twitter.com/KKeUP9zCg1

The Intercept highlighted a particularly egregious example of the team of prosecutors coordinating to ensure Lula’s party would not prevail in the 2018 election after the former president was imprisoned and barred from running:

One glaring example occurred 10 days before the first round of presidential voting last year, when a Supreme Court justice granted a petition from the country’s largest newspaper, Folha de São Paulo, to interview Lula, who was in prison on corruption charges…

Immediately upon learning of that decision on September 28, 2018, the team of prosecutors who handled Lula’s corruption case—who spent years vehemently denying that they were driven by political motives of any kind—began discussing in a private Telegram chat group how to block, subvert, or undermine the Supreme Court decision. This was based on their expressed fear that the decision would help the PT—Lula’s party—win the election. Based on their stated desire to prevent the PT’s return to power, they spent hours debating strategies to prevent or dilute the political impact of Lula’s interview.

In response to the leaked documents, Lula’s legal team demanded that the former president be released from prison “immediately.”

“There is no question the procedures against former President Lula are tainted by extremely serious issues when it comes to violations of fundamental guarantees and denial of one’s rights,” Lula’s lawyers said in a statement. “Lula should be released immediately and the courts should recognize once and for all that he has not committed any crime.”

The truth will prevail. https://t.co/NtVbCWFONR

The trove of documents, provided to The Intercept by an anonymous source, immediately provoked national controversy in Brazil.

“It’s like stopping the other team from playing. Its like they decided to play the ball alone,” Carlos Melo, a professor of political science at the São Paulo business school Insper, told The Guardian in response to the documents. “A basic principle of law is that those who accuse do not judge.”

The prosecutors implicated by the documents issued a statement saying they are the victim of a “criminal act” by a hacker, but did not dispute the authenticity of the documents.

The Intercept’s Glenn Greenwald, whose byline appeared on the three stories about the leaks published Sunday, called the documents “one of the largest and most important archives of leaked material in years.”

“In sum,” Greenwald tweeted, “the process that imprisoned Lula and rendered him ineligible to run—paving the way for Bolsonaro’s ascension to power—was fueled by wrongdoing, politicized abuse of power, and deceit: all of which will now be revealed due to this massive leaked archive of their secrets.”