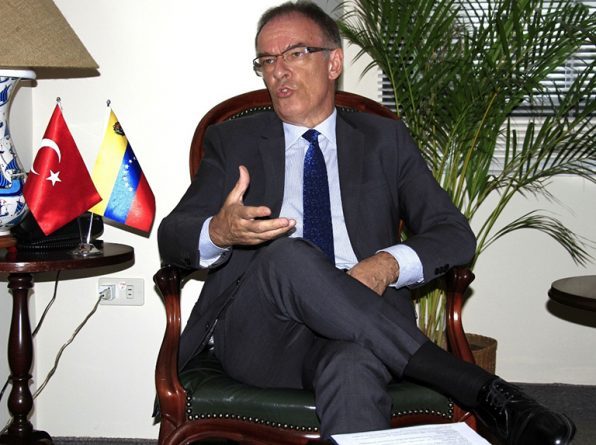 “The unilateral sanctions imposed by the United States on Venezuela are directly affecting ordinary Venezuelans, are counterproductive and are unfair.” This was stated by the ambassador of Turkey in Venezuela, Şevki Mütevellioğlu, who adds that bilateral trade has also been affected by sanctions.

In an exclusive interview for Últimas Noticias, the ambassador explained that bilateral trade between Turkey and Venezuela has increased 10 times in the last year.

In 2017 the volume of bilateral trade reached 155 million dollars, but in 2018 it closed at 1.2 billion dollars. “The year 2018 was a fantastic year” said the Ambassador in reference to the potential development between both nations.

However, by 2019, the figures had been affected by the US economic sanctions imposed on Venezuela.

“The sanctions negatively affect trade between Turkey and Venezuela which is not fair,” says Mütevellioğlu, who adds that financial transactions and payments are affected by sanctions, which he calls “criminal”.

Nevertheless, Mütevellioğlu maintains optimism about the bilateral relations that have strengthened in the last 19 years.

There is also a series of bilateral agreements that have increased the visits of Turkish officials to Venezuela and vice versa.

“The links between Turkey and Venezuela are very promising and are continuing to develop,” the ambassador added.

Şevki Mütevellioğlu explains that Turkey sees “with very good eyes” the future of Venezuela and that is why it is betting on joint projects, in different areas, for the benefit of both nations.

He highlighted the increase in flights of Turkish Airlines, which now increased the frequency to five weekly flights between Venezuela and Turkey.

The number of Venezuelan students attending Turkish universities with an Erdogan government scholarship has also increased.

They will offer Turkish classes to Venezuelan officials, and they will bring Turkish teachers to teach at the two schools in Caracas that were run by the FETÖ organization (connected with the Turkish Coup leader Fethullah Gülen currently requested for extraditions by Turkey’s authorities) and that were recovered by Turkey.

They will strengthen cooperation in the cultural area and the “Young Diplomats ” program for Venezuelan students to participate.

As well they will contribute with the pharmaceutical development of the country.

“Turkey wants Venezuela to develop its own pharmaceutical industry and improve the existing infrastructure,” the ambassador added, explaining that it is a fairly advanced project that will help to overcome [the need for] imports, and increase production of its own medicines.

“Turkey has gone through similar situations in the past and we suffer sanctions not to the extent that Venezuela has suffered until today, but we learned during those years that we must produce everything from our own hand,” he said.

Turkey is a real friend

Despite the crisis in Venezuela, Ambassador Mütevellioğlu remains very optimistic about the future. He welcomed the dialogue initiative, with the mediation of the Kingdom of Norway and assures that “today there is more enthusiasm for dialogue, than two or three months ago”.

“I think the Venezuelan government is handling things in an interesting way (…) Venezuelans in Venezuela, Venezuelan politicians, the opposition, speaking to each other can bring an understanding, which would be the most important achievement and Turkey has supported the dialogue from the beginning”.

He rejected calls for a “foreign intervention” in the country and questioned the little support the nation has obtained from its neighbors in the region.

“I preserve optimism in relations with traditionally friendly countries that are around Venezuela that today seem to be unfriendly. Venezuela has other allied countries like Turkey, China or Russia, but it also needs the support of the countries of the region,” he said.

The diplomat highlighted his nation’s support for Venezuela. “I would like to tell any Venezuelan that they can trust Turkey and that they trust their people. Try to understand who your real friends are, and Turkey is a real friend to Venezuela,” he said.

He stressed his support for a sovereign solution of the problems. “People must be able to define the future of their country. Without external interference”.

Three years of the coup against Erdogan

On July 15, 2016 there was an attempted coup against Erdogan that left 250 dead and dozens injured.

The ambassador explains that at the beginning of the coup attempt, President Erdogan called on Turks to support the State. Then, in the seat of the Turkish parliament, under the full attack of the coup leaders, all the political forces of the country met to hold a session of support for democracy.

He adds that there are similarities between the coup attempt of Turkey in 2016 and the military uprising that occurred on April 30 in Venezuela.

“We strongly condemn coup attempts. Because it is an undemocratic way to end a system. Using the weapons of the military to overthrow a system should not be tolerated,” he said.