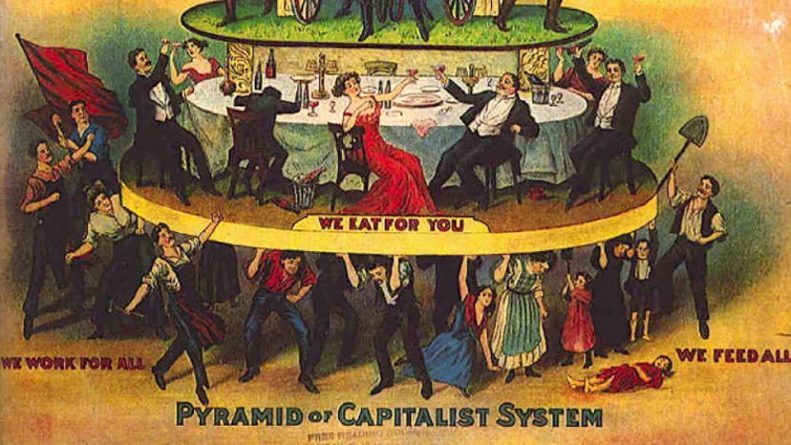 I do not have in mind the historical bourgeoisie, mediocre, rapacious, proven and indisputably parasitic, even if their omnipresent advertising campaigns want to convince us of their supposed efficiency, and through which they have forged an idea of the national grotesquely caricatured, made to the measure of their interests.

I think of the new class of bourgeoisie that has emerged under the umbrella of the Bolivarian revolution, using its close relationship with institutions, stealing the money of the Republic, often in collusion with that historical bourgeoisie, winking at the oligarchy.

Not because new is it less rapacious: it is typical of the nuevorriquismo (new comers), the unbridled race to climb and catch up with the old rich, accumulating property at a dizzying pace, imitating a lifestyle that until recently was not his, flaunting and wasting the ill-gotten wealth, rubbing elbows with magnates and celebrities, surrounding themselves with (beauty contest) misses, almost always from some metropolis of the West or from some city with pretensions to be one.

Neurotic, uneducated, this last conforming even to the strict standard of the elites, the new rich will prefer Panama, Miami or Madrid, before New York, London or Berlin. But this is no more than a flowery detail. As much as in the case of the parasitic bourgeoisie, it will be distinguished by the irrevocable decision to take the bulk of its capital out of Venezuela. The country is a mine that must be plundered. This is how it has been and he is convinced that it will be so, so there is no compelling reason to miss the opportunity.

Not because uncultured does the thinking scheme of the new rich cease to be curious. If Marx has been read, and since in Venezuela they insists on talking about socialism, he will try to justify the creation of a new bourgeoisie by appealing to the necessary development of the productive forces. The infamous stages for which one would inevitably have to travel before being able to speak properly about the possibility of going beyond capitalism.

The extensive, varied and rich problematization regarding the miseries of etapism (stagism), which can be found, with a minimum of political will and intellectual honesty, in revolutionary historiography, Marx included, is completely foreign or simply inconvenient. He does not know the debates about the “weakest link”, to put a case, or dismisses them as vulgar verbiage.

Likewise, he does not know the history of Russia and China, but the matter goes beyond pure ignorance. You do not have to be an expert to reach the conclusion that the “market economy” is not the alternative. A little bit of good sense would be enough. It is not even for China, as I can understand, but beyond what I can know or ignore, the point is that the new class does not even pose it as a problem.

If he did not know Marx and the history of Russia and China, but at least tried to understand the Commune. It would be asking a lot, certainly, but the truths have to be said, even if they seem to be excesses: you do not have to know so much about history and have read a lot, that helps, to understand the decisive importance of the Commune. It is enough to know some history of the country, to love the land in which we live, to be guided by the basic principles of revolutionary politics, to handle the rudiments of the economy and to rely on the strength of the organized people. Nothing we have not known for the last twenty years.

If the new rich is unable to understand the Commune, what will be left for the rich of the cradle? But those are monsters from other horror novels or, to put it another way, that is another matter.

It must be very sad to belong to the new bourgeoisie. Forced to whiten to appear pure of blood, unable to hide its origin of class, despised by the old bourgeoisie, the oligarchy and the people. They lost no opportunity to join the looting, but lost forever the opportunity to build something really great, lasting. That was its choice.

Proclaiming victory when so many people feel defeated, is one of those things that you do not want for your worst enemy, let alone to be defeated by history and by whom we are convinced that revolutions are not made to generate the new rich. Let’s specify, and this is very important, because it allows us to immunize ourselves against discouragement: every revolution engenders them (the new bourgeoisie). Revolution is a human work and not divine. The error of the new rich is precisely to believe themselves to be divine, and that defect of origin is what makes them irremediably vulnerable, because they believe that their time will never come. But it arrives, and punctually.

For a long time the propaganda machinery of global capital uses the existence of the new class to persuade us that revolutionary change is unfeasible, that all transformative effort is useless. The advice is very old: every revolution invariably ends in betrayal. It traverses conservative historiography through and through. And it goes much further: it pretends to make us believe that all popular conquest is a privilege, that if we talk about revolution we are condemned to live miserably. The privileges of the new class would be the confirmation that we have not made more than false illusions.

It is, of course, a trap to hunt the unsuspecting. Falling into it is a luxury that we can not afford.

The revolution is an event. The new class an inevitable accident. But an accident that is not a measure of our failure, but of everything we still need to do.