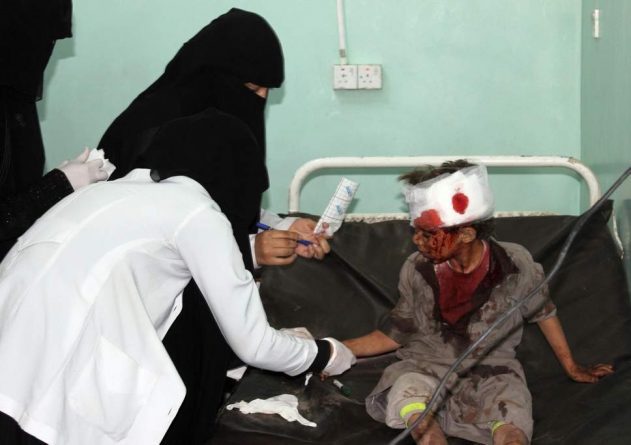 London, Washington under pressure to halt arms sales to Saudi Arabia and UAE after new report finds their weapons were used in 27 apparently unlawful coalition airstrikes which killed over 200 people in Yemen.

British and American bombs have killed and maimed nearly 1,000 civilians, including over 120 children in Yemen, since the start of the war there, a new report has revealed.

The findings have sparked fresh calls for both countries to halt arms sales and military assistance to Saudi Arabia and the UAE, who used the weapons in a ruinous four-year conflict there.

The 128-page investigation, spearheaded by the US-based University Network for Human Rights (UNHR) and Yemeni monitoring group Mwatana, investigated 27 apparently unlawful airstrikes launched in Yemen by the Gulf alliance between April 2015 and April 2018.

They found that in every one of these sorties, US or UK made weapons were probably used, killing at least 203 people and injuring nearly 750. Over 120 children, meanwhile, and at least 56 women were among the dead and wounded.

These 27 strikes were the only incidents which the researchers were able to collate sufficient evidence for – access in Yemen is heavily restricted. But Mwatana found that in 2018 alone there were 128 apparently unlawful airstrikes.

The report has for the first time exposed that UK weapons had likely been deployed in at least five apparently unlawful airstrikes in Yemen, hitting a community college, multiple civilian businesses and a warehouse, resulting in the death of one civilian and the injury to a child.

It comes just weeks after the House of Lords International Relations Committee said that British arms sales to Saudi Arabia, totalling £4.7bn since the Yemen war began, have caused “significant civilian casualties” and so are probably illegal.

“This report shows there is a pattern of apparently unlawful airstrikes in which western weapons have been used by the coalition. It is evidence that the US and the UK have been playing a role in the slaughter and devastation that is happening in Yemen right now,” said Ruhan Nagra, of the University Human Rights Network, which co-authored the new report.

“The conversation so far in the UK has been about the ‘risk’ of UK weapons being used in unlawful strikes … This report shows it isn’t about the risk anymore, UK arms are already being used, repeatedly. And the companies that produced these weapons, Raytheon and GEC-Marconi Dynamics, are implicated, too,” she added.

The Saudi-led coalition launched a bombing campaign over Yemen in March 2015 to reinstate their ally Yemeni president Abedrabbo Mansour Hadi who had been forced out of power by the Iran-backed Houthi rebel group.

Five years on there is little sign of an end to the conflict, which has killed over 60,000 people and pushed 14 million people to the brink of famine. Foreign Secretary Jeremy Hunt flew to the region last week to try to salvage the UN’s latest peace plan.

United Nations experts have accused all sides, including the Houthis, of committing possible war crimes. The Saudi and UAE-led coalition have come under fire for their airstrikes, which according to the UN have targeted markets, funerals, weddings, detention facilities, civilian boats and even hospitals. The coalition has repeatedly denied the accusations and any wrongdoing.

Wednesday’s report not only detailed the UK’s and US’s likely involvement but also showed that the number of potentially illegal airstrikes is actually rising.

Mwatana documented 128 apparently unlawful airstrikes in 2018 that killed at least 418 civilians, including 181 children.

That’s an increase on the nearly 90 unlawful coalition attacks that Mwatana documented in 2017, which killed over 350 civilians, including 161 children and 45 women.

UK-based Campaign Against Arms Trade (CAAT), which is currently challenging in court the UK’s decision to continue to license the sale of military equipment to Saudi Arabia, called Wednesday’s report the most “comprehensive to date”.

“It makes clear the scale of destruction that has been inflicted on the people of Yemen,” CAAT’s Andrew Smith told The Independent.

Ms Nagra said the report, which urges an immediate halt to arms sales to Saudi Arabia and the UAE, adds further evidence to back CAAT’s arms case as well as the House of Lords report.

“The High Court made much of the fact that human rights organisations have limited access to Yemen but this report was put together using research collected by a Yemeni organisation with 70 staff people across the country who visited strike sites, photographed remnants and analysed attacks in real time,” she said.

“It lends further support to the House of Lords’ recent committee report concluding that UK arms transfers are already on the wrong side of the law,” she added.

Since the Yemen war erupted in 2015, the UK has licensed a staggering £4.7bn worth arms sales to Saudi Arabia, and around £585m to the UAE, according to CAAT.

Meanwhile, Saudi Arabia and the Emirates have been among the two largest importers of US arms.

In the last two years alone, the US has implemented $27.9bn of foreign military sales to Saudi Arabia, according to the State Department.

The US has also provided the coalition intelligence sharing and training. Until November 2018 it was refuelling Saudi-led coalition jets.

The fresh evidence highlighted in the report piles more pressure on both administrations which are facing mounting demands from their legislators to abandon military ties with the Gulf states.

Over the last few weeks in the UK, Theresa May has faced down calls for a ban on arms sales following the House of Lords report.

Meanwhile, in the US the House of Representatives passed a historic resolution last month to rescind US military support for the campaign in Yemen. The Senate is expected to vote on a parallel resolution in the next month. The Trump administration has already threatened to veto Congress’s efforts.

“We operate one of the most robust export control regimes in the world and keep our defence exports to Saudi Arabia under careful and continual review,” a spokesperson said.

“All export licence applications are assessed on a case-by-case basis against the Consolidated EU and National Arms Export Licensing Criteria, taking account of all relevant factors at the time of the application.”

The State Department declined to comment directly about the report.

But a State Department official told The Independent that all proposed US defence sales or transfers were carefully assessed to examine issues including “regional security, nonproliferation, and human rights concerns”.

“The US has taken a number of actions to help the Saudi-led Coalition support the Yemeni government and defend Saudi territory, while minimising civilian casualties, including: training, providing better equipment, and advising the Saudi military to help them improve their targeting processes,” the official said.

However, Wednesday’s report found that many of the attacks appeared to take place far from any potential military target, while others caused harm to civilians that vastly outweighed any likely military benefit.

The report said in no case did it appear that coalition forces took adequate precautions to minimise harm to civilians, as required by international humanitarian law (IHL).

Among the attacks the report investigated was an April 2018 coalition strike in Yemen’s northern Hajjah governorate, in which a US-made GBU-12  Paveway II laser-guided bomb pounded a wedding party, killing least 21 people and injuring 97 guests, including nearly 60 children.

“The blood was everywhere. Fingers and intestines were in all directions,” Amina Al-Shahb, 50, the mother of the groom is quoted as saying.

“Body parts were on trees and rocks and people tried to collect as many of them as possible and the remaining body parts were eaten by dogs,” she adds.

Among the attacks that purportedly used UK weapons were two in the Sana’a governorate in which “Hakim” A series precision-guided munitions were deployed. The report said one tore though Radfan Ceramics Factory, killing one and injuring a child in September 2015, another hit a community college, also in the Sanaa area, in January 2016, destroying the building.

In both instances, eyewitnesses said that there were no military targets in the immediate area. The report said the attacks appeared to have been indiscriminate.

“Seven hundred workers became jobless …  We lost everything in the blink of an eye,” Ghalib Ahmed Al-Swari, 40, the factory’s general director says of the September 2015 strike.

Lloyd Russell-Moyle, a Labour MP who is on the UK’s parliamentary Arms Export Committee, called for an immediate suspension on arms sales to Riyadh.

“The UK government is prioritising its own commercial contracts with Saudi Arabia to provide planes, bombs and maintenance over its duty to abide by UK law, which explicitly bans arms sales to nations that might violate IHL,” he told The Independent.

Conservative MP Andrew Mitchell, meanwhile said: “If these investigations demonstrate breaches of international law and the rules of warfare then those responsible – whoever they are – should be held to account.”

The CAAT accused the UK government of directly facilitating and enabling “atrocities”.

“Jeremy Hunt spent last week calling for solutions to the conflict. The best thing he can do is stop the arms sales to the  Saudi-led coalition and end the UK Government’s complicity in the crisis,” CAAT’s Mr Smith said.