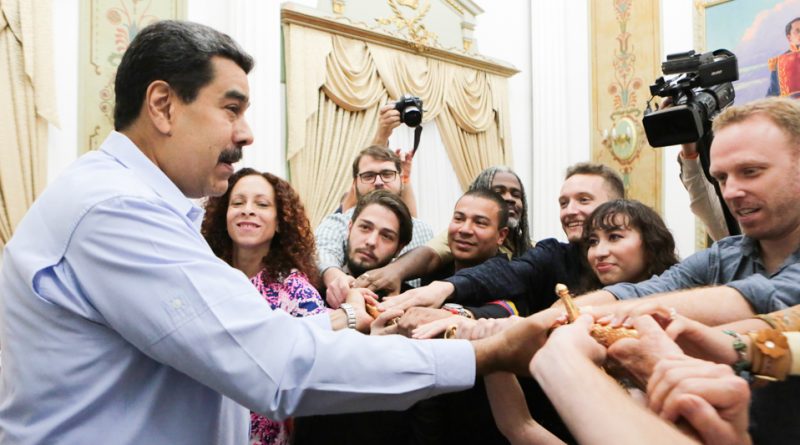 US activists who defended the diplomatic headquarters of Venezuela in Washington, United States fought for respect of international law.

This was stated by the Minister of Popular Power for Foreign Relations, Jorge Arreaza, after the meeting of the president, Nicolás Maduro, with US activists on Tuesday in Miraflores Palace.

During the meeting with President Maduro, they were given as a gift a replica of Simon Bolivar’s saber, one of the highest recognitions the Venezuelan government has. “This is the first time we give this recognition to US citizens”, added the head of state during the encounter.

Our gratitude and eternal recognition to the Protectors Collective of our diplomatic office in Washington. Their actions reflect their high morale for the defense of the dignity and sovereignty of the Venezuelan people. pic.twitter.com/XlADiN6Aqy

He stressed, in the company of these men and women, that “it has been an honor, a privilege to share with these colleagues, compatriots of the great Motherland that is humanity, as José Martí said, and that they defended Venezuelan territory against US government aggression, against the siege and blockade that exists against Venezuela, and against our Embassy in the capital of the United States. ” The Venezuelan Foreign Minister explained that the head of state has made a long intervention trying to go beyond his own recognition of the facts, to articulate actions, “to articulate our ideas, our ideologies for the construction of a better world”.

Likewise, Arreaza extended a greeting to some members of the group who, for adverse reasons, could not attend the meeting with the head of state, especially the four citizens who face a legal process for defending the integrity of Venezuela’s diplomatic headquarters.

“Let’s continue fighting together, we will see sooner rather than later great changes, great paths that will also be opened for the people of the United States,” Arreaza added.

One of the representatives, Patricia “Paki” Weland, gave thanks for the opportunity given, noting that the work they did was for the preservation of justice and international law, in order to protect Venezuela.

“Our work was based on the principle of solidarity with the people of Venezuela and the peoples of the world, in an anti-imperialist sentiment,” he said.

For his part, Max Blumenthal indicated that they are in Venezuela in a spirit of peace and diplomacy to demonstrate the truth of the effect and scope of the attacks on the Bolivarian Revolution, “there are millions of Americans who do not have a home, there are students coping with the weight of a debt that cannot be paid, it is essential that there be a revolution in the United States that allows us to reach new levels of truth, of improvements for the entire population as has been achieved here”.

“Therefore, we say that, for the love of our neighbors, our communities and the communities of this country, we say that we must stop the empire, and the abuses they commit against others. If there is any regime to change, it is in the United States,” he said.