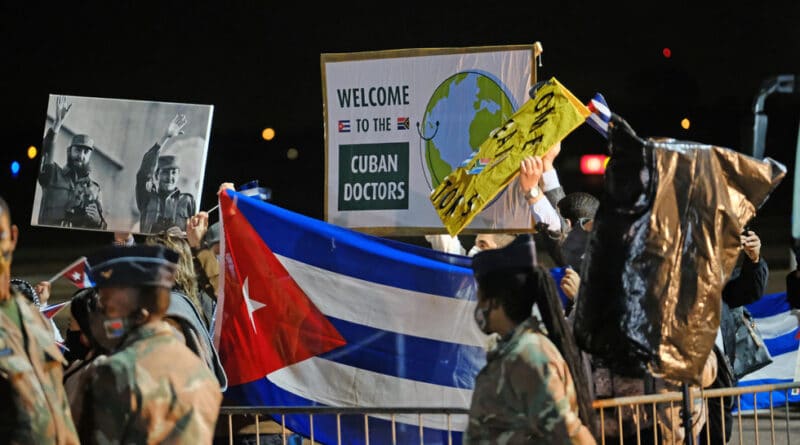 September 29, 2020.- Daniel Kovalik teaches International Human Rights at the University of Pittsburgh School of Law, and is author of the recently-released No More War: How the West Violates International Law by Using “Humanitarian” Intervention to Advance Economic and Strategic Interests.

As clamor grows for Cuban doctors to receive the Nobel Peace Prize for their international work during the pandemic, the US continues to oppose their efforts. It cannot be seen to endorse the idea that the socialist system works.

In his book, In Cuba, the late Liberation Catholic priest Father Ernesto Cardinal of Nicaragua relates that, upon visiting Cuba in the mid-1970s, he witnessed an entire country which resembled a Franciscan Christian community – a set of people living in simple, austere circumstances sharing what little they had with each other.

And, of course, Cuba has become renowned for sharing the little it has – little, because of a US embargo which has been strangling its economy for nearly 60 years – with the rest of the world.

The most significant contribution Cuba has made has been its international medical solidarity, which has benefited scores of countries, mostly, but not solely, in the developing world.

Cuba began offering such assistance very shortly after the 1959 revolution led by Fidel Castro. Echoing Father Cardinal’s reflections about Cuba, Johns Hopkins University Professor Piero Gleijeses describes Cuba’s outreach to Algeria shortly after the Cuban Revolution in the following words: “It was an unusual gesture: an underdeveloped country tendering free aid to another in even more dire straits. It was offered at a time when the exodus of doctors from Cuba following the revolution had forced the government to stretch its resources while launching its domestic programs to increase mass access to health care. ‘It was like a beggar offering his help, but we knew the Algerian people needed it even more than we did and that they deserved it,’ [Cuban minister of public health] Machado Ventura remarked. It was an act of solidarity that brought no tangible benefit and came at real material cost.”

Cuba has only increased such solidarity over the years. For example, it sent doctors 4,500 miles to Western Africa to successfully fight the deadly Ebola virus. In addition, as The New York Times begrudgingly acknowledged, Cuban doctors were in the forefront of the recent fight against cholera in Haiti. After the Chernobyl nuclear disaster, Cuba took in thousands of children suffering from the fallout to be treated. Many of those individuals still live in Cuba, years after the collapse of the USSR. Cuba has even sent doctors to help in the United States – specifically, to fight infant mortality in Chicago.

Most recently, during the Covid-19 crisis, Cuba has sent doctors to both developing countries, such as Venezuela, Suriname, Jamaica and Grenada, as well as to developed nations, such as Italy, to assist in fighting the pandemic.

To acknowledge Cuba’s global efforts to fight Covid-19, there is an international movement afoot lobbying for its medical team, known as the Henry Reeve International Medical Brigade, to receive the Nobel Peace Prize. A petition lobbying for this honor has garnered 30,000 signatures from around the world, including from such notables as the former president of Ecuador Rafael Correa, actors Danny Glover and Mark Ruffalo, and writers Alice Walker and Noam Chomsky.

However, quite shockingly, the US, standing nearly alone in the world, has opposed the efforts of Cuba to fight the global pandemic from the very beginning. As the Asia Times explains: “The US government has continued attacking Cuban medical internationalism right up to the current pandemic, making wild allegations against the program that disparage the medical workers. Paul Hare, a former British ambassador to Cuba who teaches in the United States, told Reuters recently that the US is “almost totally isolated” when it comes to its Cuba policy. Each year since 1992, the United Nations General Assembly has voted to end the US-imposed embargo on the island. In 2019, 187 countries said the embargo must end, while the US stood with two of its closest allies, Brazil and Israel. Ambassador Hare’s phrase “almost totally isolated” is an understatement.”

This begs the question of why the US would oppose such international solidarity. Certainly, part of the animosity to Cuba and its global efforts flows from the fact that it has partnered closely with countries, like China, with which the US is at odds.

However, the truth is that Cuba’s close ties with China, just as its prior close ties with the USSR, have largely been necessitated by the US’ aggressive economic blockade of the island nation, as well as its incessant military threats. As Noam Chomsky has often pointed out, the US intentionally acts in ways towards fledgling revolutionary nations which push them into the arms of the Communist superpowers, and then points to this as justification for more intensified aggression.

In my own view, the real reason the US is pushing against Cuban medical solidarity is its fear of what some, including Oxfam International, have referred to as “the threat of a good example.”

That is, countries like Cuba threaten the hegemony of the US and global capitalism by its very successes in building a socialist model which shows that people’s needs, both domestically and abroad, can be fulfilled better in the absence of the profit motive. Such examples must be destroyed, lest they demonstrate to other developing countries that they can do better if they leave the clutches of the predatory capitalist system.

Moreover, such examples even threaten to show the people of the US – the country which, despite its unique riches, has one of the worst Covid-19 rates in the world – that there is a better way to organize an economy and a society.

At a time when the US electorate’s support for socialism is greater than it has been in decades – in part because of the inequities and failures exposed by the pandemic – Cuba represents an example which the powers-that-be must destroy, and they are acting aggressively to try to do so.