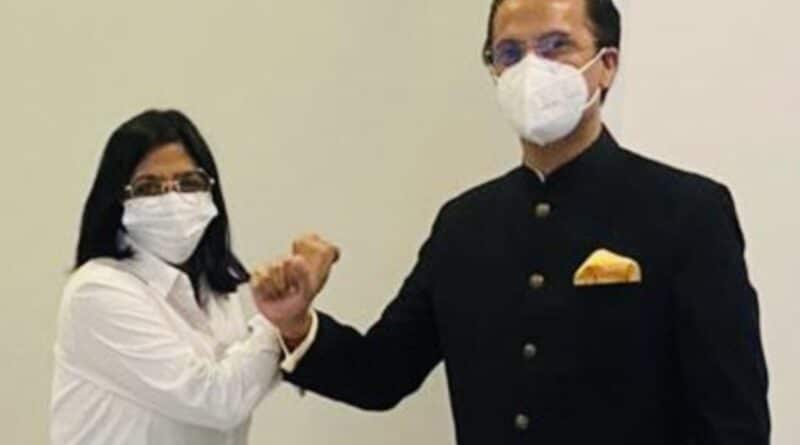 This Thursday, December 31, the Executive Vice President of the Republic, Delcy Rodríguez, held a meeting with the Indian ambassador in Caracas, Abhishek Singh, to take stock of the intense year of mutual activities that united both nations in 2020, and predicted higher level of union and cooperation for the challenges that the New Year brings.

“We held an end-of-year meeting with the Ambassador of the Republic of India in Venezuela, Abhishek Singh, with whom we took stock of relations of brotherhood and cooperation between both nations and we predict a successful 2021 for all humanity,” wrote the high official in her account on Twitter, @drodriven2.

Since October 1, 1959, Venezuela and India began their bilateral relations, which have been strengthened and consolidated throughout the Bolivarian Revolution, the Executive Vice President reported in a press release.

With Commander Hugo Chávez’s visit to India in March 2005, a South-South rapprochement between both peoples and governments was agreed with his counterpart APJ Abdul Kalam.

In recent years, Venezuela and India have strengthened their ties of cooperation, friendship and brotherhood, both bilaterally and in international relations, as both countries are members of the Non-Aligned Movement (NAM).

Ambassador Singh presented to the president of Venezuela, Nicolás Maduro, his credentials as the new diplomatic representative in Venezuela, on August 11 of 2020.

Featured image: Photo courtesy of the Office of the Vice President.