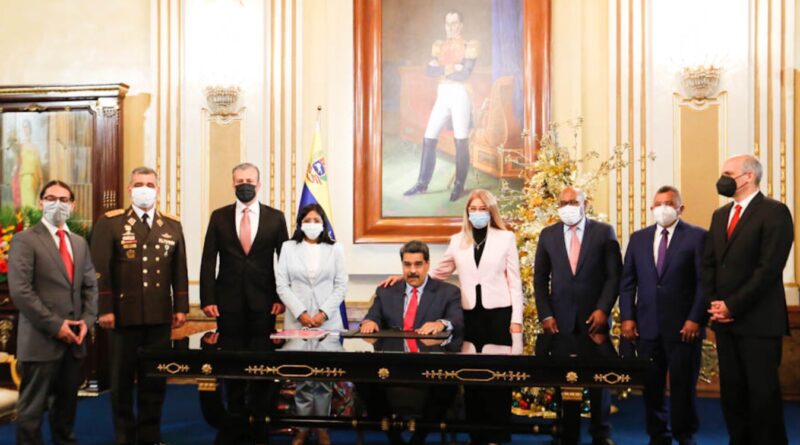 This Thursday, Venezuelan President Nicolás Maduro Moros, offered his end-of-the-year message on a national TV broadcast, where he welcomed the new year as this is a particular date for the Homeland, taking into account that the 200 years of the Battle of Carabobo will be celebrated in 2021.

“2021, which that great prophet who was Commander Chávez envisioned as a splendid date for the country because it was the moment for repairing the betrayals of 200 years ago,” said the head of state. He asserted that if a date is significant for the Republic, it is that of the great victory of Carabobo because “June 24, 2021 is the era of the rescue of our traditions, sovereignty, independence with the people in power.”

During his speech, he took stock of government management and the importance of the performance of the different forms of popular organization in the fight against the Coronavirus pandemic.

“The selfless dedication of the national medical teams and the Cuban brigades that have come to help in this contingency should come to all Venezuelans with pride. The organization of the People’s Power has been key to the success in the fight against this pandemic, in the same way that the participation of our beloved Bolivarian National Armed Forces and all the police in our country has been decisive,” stressed the head of state.

He pointed out that despite the economic blockade and the coercive measures imposed by Trump’s regime, the public health system has been strengthened and has shown discipline, courage and national commitment.

“With the Venezuelan 7+7 reopening scheme, the use of new forms of consultation with millions of compatriots through the Patria System, with the deployment of thousands of our heroic health brigades throughout the territory house to house, with the iron discipline of our people that respected social distancing and maintains the use of the mask as an instrument already universally recognized to break the chains of contagion, with free and universal care for all patients, with their treatments, we achieve a social and health balance that keeps us among the countries with the lowest fatality rate in the world – less than 1% per 100,000 inhabitants – and with the highest recovery rates, which today borders on 96%,” the president of the Republic pointed out.

He highlighted the contributions that Venezuela has made to the world in the fight against the pandemic, among which stand out the discovery of the DR-10 molecule and the miraculous drops of José Gregorio Hernández, which have 100% curative properties and has been made available to the Pan American Health Organization.

“The first test that this Coronavirus pandemic imposed on us as a society, as a nation, as a people, we have faced with nobility and now it is up to us to grow in the face of the challenges that await us in 2021,” he said while ensuring that the national government will continue to wage the battle against Coronavirus in the new year 2021.

He stressed that 2021 will be the beginning of a new cycle of the Bolivarian Revolution, where he pointed out that the social welfare state that was hit by the genocidal blockade of the United States and its European allies will be rebuilt. In this sense, he highlighted the important role that the new National Assembly to be installed on January 5 will play, which he argued will put an end to the dark five-year period signed by the outgoing parliament dominated by the Venezuelan right.

He praised the Venezuelans’capacity for resistance and dignity that allowed them to reach 2021 in peace and on their feet. “Your 2020 fight will be rewarded,” he pointed out. He stressed that 2021 “must seal a fundamental goal for the historical process of changes the supreme social happiness” raised by the Supreme Commander Hugo Chávez.