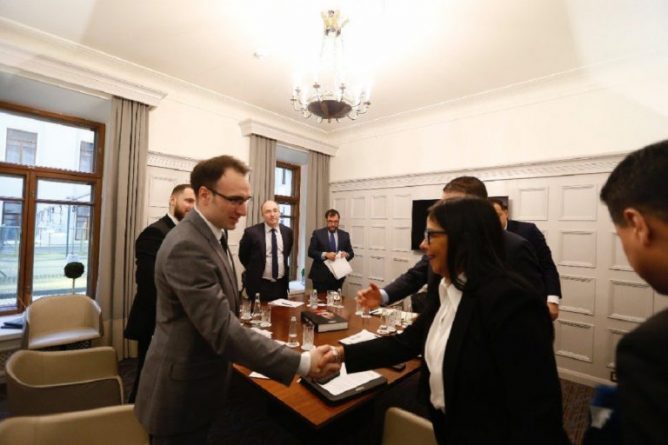 This agreement seeks to defeat the unilateral sanctions imposed by the US government to which the Venezuelan people are subjected.

Venezuela strengthened strategic alliances with the pharmaceutical company Biocad of the Russian Federation, for the acquisition of medicines and production of biological products in Venezuelan territory.

This was reported during the tour of the Executive Vice President of the Bolivian Republic of Venezuela, Delcy Rodríguez, to Russia, where she strengthens the strategic alliances between both nations.

The cooperation between the Venezuelan Ministry of Popular Power for Health (MPPS) and this important Russian pharmaceutical company seeks to defeat the effects of the unilateral sanctions imposed by the US government and the commercial blockade to which the Venezuelan people are subjected .

The Minister of Popular Power for Economy and Finance, Simón Zerpa, also participated in the meeting; the ambassador of Venezuela in the Eurasian nation, Carlos Faría , and the vice minister for Europe of the Venezuelan Chancellery, Yván Gil.

Venezuela and Russia have signed more than 260 agreements in health, agriculture, oil, gas, industrial, military, among others, consolidating relations between both nations .

The authorities of both nations agree that the bilateral agreements began to be consolidated in 2001 thanks to the vision of Commander Hugo Chávez, which has allowed the achievement of various goals and service to hundreds of Venezuelans in different areas.