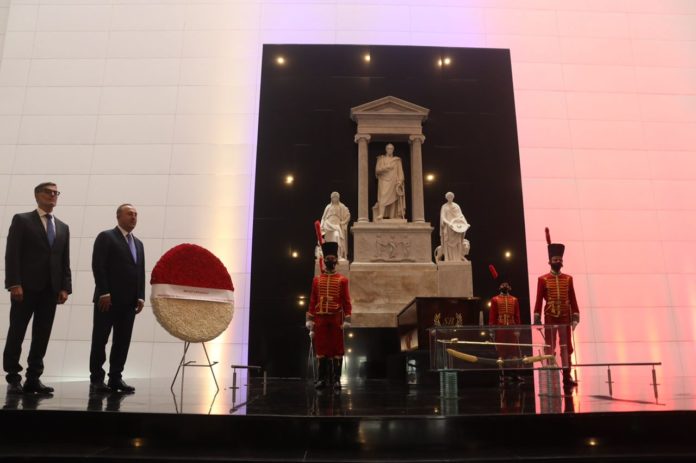 On Friday, April 29, delegations from Venezuela and Turkey paid homage to the Liberator Simón Bolívar at the National Pantheon, in Caracas, where both countries reaffirmed their commitment to Bolívar’s legacy for the sovereignty and integration of the peoples of the world.

The Foreign Affairs Minister of Turkey, Mevlüt Çavuşoğlu, together with his Venezuelan counterpart Félix Plasencia, presented a floral offering to the Liberator at the National Pantheon.

“We accompany the Foreign Minister of Turkey, Mevlüt Çavuşoğlu, to pay tribute at the National Pantheon to the memory of the Libertador, Simón Bolívar, through a floral offering ceremony, where we reaffirm the commitment to his legacy of struggle for the sovereignty and integration of the peoples,” Plasencia wrote on Twitter.

The two foreign ministers were accompanied by the Ambassador of Turkey to Venezuela, Sevki Mutevellioglu; the Mayor of Caracas, Carmen Meléndez, and other representatives of delegations of both countries.

Visit to National Assembly
As part of his work agenda, the foreign minister of Turkey, together with the Turkish delegation accompanying him, also toured the headquarters of the National Assembly of Venezuela, where he was received by the deputies.

The opening remarks were made by the Venezuelan Oil Minister, Tareck El Aissami, who welcomed the Turkish delegation and sent greetings to the President of Turkey, Recep Tayyip Erdogan, and the people of Turkey.

“Today I receive you in Venezuela so that together we can continue building a cooperative agenda at the highest level and for the benefit of our peoples,” he added.

El Aissami emphasized that the cooperation between the two countries represents the brotherhood between peoples and reaffirms before the international community “that we are on the right path in defense of multilateralism and the peace agenda that inspires us to work for a better world, more equitable world, without hegemonies or empires, a world that opens the horizon to future times.”

He specified that new cooperation agreements will be signed in areas of tourism, health, science and technology, education, among others.

Regarding the issue of tourism, El Aissami commented that a trip to Turkey by a Venezuelan delegation is being planned to sign a memorandum of understanding between the associations.

For his part, the Turkish Foreign Minister, Mevlüt Çavuşoğlu, highlighted the advances in the relation of his country with Venezuela, which have strengthened the multilateral integration between the two countries.

Çavuşoğlu also denounced the sanctions imposed by Washington on Venezuela, and stressed that, despite this, business between Ankara and Caracas has tripled, amounting to $850 million, and Turkey hopes that this will increase to $1.5 million.

Business roundtable
Earlier, on Thursday, April 28, the foreign ministers of Turkey and Venezuela participated in a business roundtable at the International Center for Productive Investments (CIIP) with companies from both countries, to strengthen trade and investment between the two nations.

RELATED CONTENT: Why is Turkey Pretending Its Neighbours Approve of Its Occupation of Their Territory?

“We participated, together with Foreign Minister Mevlüt Çavuşoğlu, in a business roundtable at the International Center for Productive Investments (CIIP) with companies from Turkey and Venezuela, taking stock of joint actions to be taken to strengthen trade and investment,” Plasencia wrote on Twitter.

“Together with the Foreign Minister Mevlüt Çavuşoğlu, we inaugurated in Caracas the San Román International School, of the Turkish Maarif Foundation,” wrote Plasencia in a Twitter post. “This beautiful educational venue, the result of bilateral cooperation, will contribute to the training of our young people and the cultural unity of both peoples.”

The Turkish Foreign Minister, Mevlüt Çavuşoğlu, had arrived on Thursday at the Simón Bolívar International Airport in Maiquetía, La Guaira state, to participate in the Third Turkey-Venezuela Joint Cooperation Commission and other activities of cooperation and diplomacy between the two countries.