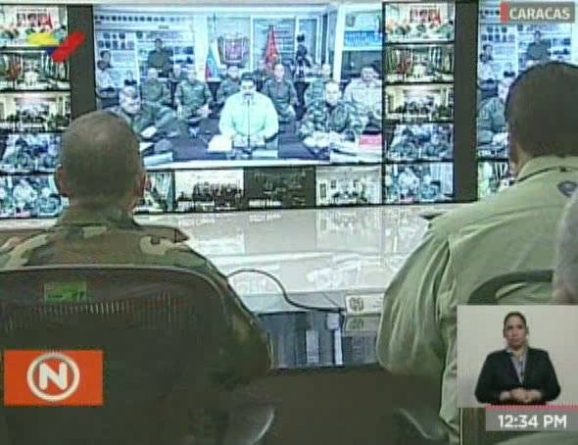 During a video conference with the High Command of the Venezuelan Armed Force (FANB) and all the Commanders of the different strategic Military Zones of Venezuela, President Maduro announced today the closing of the border with Brazil starting today until further notice.

President Maduro also referred to the decision to close the air and sea communication with Aruba, Curaçao and Bonaire and said that it was taken with great sadness from his side because he has affection for those islands but the decisión could not be avoided because of the flagrant support of the islands’ authorities and the government of Netherlands support of the US South Command plans. The President reported that conversations with Curaçao and Dutch authorities have began and he hope rectifications from their side will allow normalization of communications.

The Commander in Chief of the FANB, Nicolas Maduro, also said that the closing of the border with Colombia is being evaluated, that he didn’t want to repeat a similar decision taken in 2016 but that will depend on how the Colombian authorities perform in terms of respect to Venezuela’s sovereignty.

He said that 20.000 boxes of Clap with groceries for Cúcuta already departed from La Guaira and that he expects that the 2 concerts organized on both sides of Las Tienditas Bridge for this weekend develop without incident and holds Colombian president Ivan Duque responsible of any alteration of security.

The Venezuelan President sent a message of gratitude to the Venezuelan army and invited them to be vigilant of any development that affects the territorial integrity of the nation and not to be subject to the psicológical warfare promoted directly from the White House.