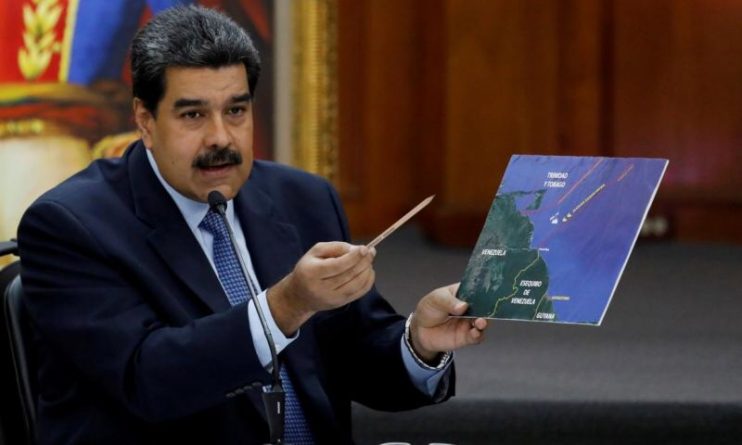 After the swearing-in of President Nicolas Maduro before the Supreme Court of Justice, the Latin American scenario oscillates between rectifications, loosening of positions and extreme positions with respect to what was stipulated in the last communiqué of the “Grupo de Lima” and the radicalism expressed by the voices of the Trump Administration.

Juan Guaidó amid confusion, ambiguity and calls to violence

The first act of the day was led by the president of the National Assembly in contempt during the realization of an “Open Cabildo” in the wealthy area of Altamira, located in eastern Caracas, where a small group of people complied with the call.

There, questioned by the brave bars of “civil society” that asked him to assume the presidency and end Chavismo in a single shout, he offered a confusing and ambiguous message in which he tried to balance to gain time. The opposition media El Estímulo made clear the confusion after the event: “The president of the National Assembly, Juan Guaidó, assumed the presidency of the Republic? Yes and no,” highlighting the limbo in which the opposition bloc is located to take the next step.

Mixing articles of the constitutional text in a disjointed form, such as 233 and 350, and being outside the National Assembly, he tried to calm the pressures symbolically assuming the powers of the executive on the way to a “transitional government” leading to new elections, but at the same time requesting the support of the Bolivarian National Armed Force (FANB), together with international pressure and street mobilization, to “make it happen”. Following El Estímulo, Juan Guaidó is and is not president at the same time. Guaido’s labyrinth message can also be seen as an accounting of the fragile points of support in which the current “regime change” agenda is supported, which in the institutional field is determined to make viable the fracture of Chavismo, while in the political, by the variant of the military coup or a foreign intervention. In short: variables beyond the current insurrectionary tale are not under the command of local anti-chavismo forces.

Although the event was convened to design “the road map” to achieve the “transition”, the subsequent sensation in social networks before the game of words of Guaidó was disenchantment and discomfort on the one hand, as joy and triumphalism on the other. The final perception of the event was a reflection of the tensions and conflicting agendas that cross-section the anti-chavismo bloc between the traumatic routes of the intervention and the negotiation-oriented positions, which reached their climax when the color revolution of the year 2017 was dismantled by the National Constituent Assembly.

For January 23 an anti-government mobilization was convened, handling the same symbolic language of sedition and apocalyptic violence that preceded the color revolutions of previous years, but now remastered under a narrative that the fall of Chavismo is an institutional fact.

By the temporary margin from here to the mobilization, the opposition loses the surprise effect and the primacy in the marking of the political times, while the security forces of the State gain ground to disarticulate the incorporation of armed components to the demonstrations.

At the same time, the urgency of Washington and its more aggressive allies (we speak of Colombia and Brazil, according to the initial planning of Mike Pompeo), also see in a scene of protests the instrument to promote military intervention or an escalation like the one already existing through economic means – through false flags or professionalized violence – as the “only way out” to endow the “only legitimate power” that exists for them in Venezuela: the National Assembly.

Therefore, the language of dissolution and civil war that is being used from Washington shows its intentions that the situation quickly escalate towards a scenario of chaos and fracture of political peace that has conquered the country since 2017.

The script of the “parallel government” has the same authors as the one applied to Libya in 2011.

Reconfiguration of postures, rectifications and the accelerator of Washington

This was reaffirmed because while Juan Guaido was trying to calm the spirits in Altamira by self-righteousness, Foreign Minister Jorge Arreaza reported that Argentina, Chile, Costa Rica, Panama and Guatemala had rectified in point 9 of the declaration of the Lima Group, which questioned the territorial limits of the Venezuelan State in the Essequibo, complying with the deadline given by President Nicolás Maduro and “de facto” recognizing the Venezuelan government when opening said channel of dialogue. For its part, Argentina and Chile made the decision not to break relations with Venezuela, leaving the symbolic assumption of Guaidó without the expected support and without the massive departure of ambassadors that was projected to strengthen its position as “legitimate government”.

These events, which imply a relative break in the criteria unit of the Lima Group, were answered by the OAS Secretary General, Luis Almagro, with congratulations to Juan Guaido as “interim president of Venezuela”. Let us remember that the relaxation of these positions contradict the resolution passed by the Permanent Council of the OAS on January 10.

Thus, Almagro marked the agenda above its equilibrium, resolving the confusion generated in favor of mobilizing the most extreme front of the opposition bloc and trying to recompose the path of total ignorance of the rectifications of the Lima Group that did not benefit Guaido precisely. nor Washington.

A maneuver that also does not have the copyright of Luis Almagro, but begins with security adviser John Bolton and Secretary of State, Mike Pompeo, who backed Juan Guaido calling the FANB to depose President Nicolás Maduro and affirming the urgency to let the transition begin. As has been said on previous occasions, the agenda of regime change against Venezuela is demarcated and pushed from abroad. This implies that the tension becomes millimetric and surgical, that reality if well managed can generate readjustments by the unstable, heterogeneous and contradictory base on which the international harassment to Venezuela operates through the Lima Group. Exactly this was evidenced by the positions in different directions and intensities that have occurred since January 10.

The interested internationalization of the Venezuelan conflict places these governments in a position that harms national economic and commercial interests, in addition to overexposing their main figures, in internal politics, as subordinate politicians to the United States. What best describes the negative effects of this identification was how it was overexploited by Andrés Manuel López Obrador against Enrique Peña Nieto, with the results that we all know.

The governments of the Lima Group must also calibrate their internal politics, since their oppositions use that subordination as a narrative and electoral mobilization weapon.

In this sense and before the reconfigurations of the international map, the reaction of Washington strengthens the plan of the parallel government from the National Assembly to test the anti-political background options and thus discipline the regional concert: color revolution, military coup, blockade and extended embargo , foreign intervention through proxys countries (like Colombia or Brazil).

This is a clear fact because the most belligerent positions have been those of Colombia, Brazil (which recognizes the National Assembly as the “only legitimate power”), Peru and Paraguay, where the United States has found to filter the extension of sanctions, the regionalization of the financial blockade and the hard base for the international harassment of Venezuela.

In the last 48 hours, the narrative that supports the aggressions against Venezuela has refocused its orientations and the FANB has been placed as a key actor to initiate the so-called transition through a coup d’état. This again places the Civic-Military Union as the main line of Venezuelan defense, which in critical moments has been decisive for the peace of the country.