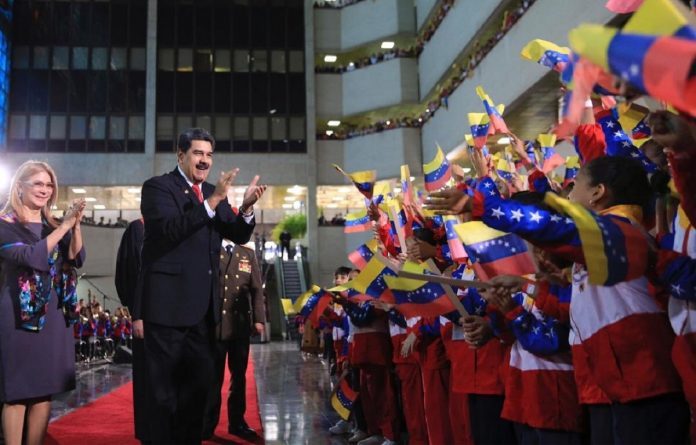 On January 10, Venezuelan President Nicolás Maduro was sworn in for a second six-year term after winning the election last May with the support of nearly 68 percent of Venezuela’s voters.

Just a few days before his inauguration, Maduro called for Venezuelans to unite, tweeting that “[the] Bolivarian Revolution is about more that one man, it’s about a people that chose to be free.” Despite the overwhelming support of those who came to the polls, interventionist attempts continued to attempt to undermine his presidency.

Less than two weeks later, Juan Guaidó, the 35-year-old recently-elected head of Venezuela’s National Assembly, stood in the streets of Venezuela and declared himself interim president. The U.S. and other imperialist countries all over the globe have supported his endeavor to topple the Maduro administration ever since.

The Bolivarian administration, which has continued to enforce many of the socialist policies that were put into effect under President Hugo Chávez, has been accused of totalitarianism and human rights violations against its people, but in reality, these policies have greatly benefited the people of Venezuela. It is because of outside imperialist forces that we see a crisis happening in the region now.

These outside forces have been trying to force a regime change for years in Venezuela, and it’s not the first time that this has happened in Latin America.

Venezuela’s history of sovereignty in their oil industry

In 2017, Venezuela was listed as one of the top five suppliers of oil to the United States.

For many years, the U.S. had a comfortable relationship with Venezuela, but after the inauguration of Hugo Chávez in 1999, Venezuela began to reassert their sovereignty over oil reserves.

After the nationalization of the oil industry in the 1970s, the foreign oil companies were replaced by Venezuelan companies and Petróleos de Venezuela, S.A. (PDVSA) was born. Within 25 years, they had become the largest company in Latin America and the tenth most profitable company in the world.

Unfortunately, nationalization caused many capitalist countries to begin looking for their oil elsewhere, and within that same timeframe of 25 years, PDVSA had gone from 18 billion barrels of oil within their reserves to more than 80 billion barrels worth. Their production capacity had increased similarly as well, and in order to fix this problem, they opened themselves back up once again to global exploitation.

Between 1993 and 1998, PDVSA split extraction rights with multiple “big oil” multinational companies, trading Venezuelan crude oil for the outside expertise and technology, as well as the efficiency that came with it. These were called strategic associations, and they allowed the country to maximize profits but brought with it a loss of sovereignty over Venezuela’s resources.

PDVSA ran autonomously and made decisions based on what would increase their profits, but President Chávez believed that the PDVSA had been given too much power and autonomy previously and turned it into a direct government arm. PDVSA’s profits were soon injected into social spending and the creation of Bolivarian missions, oil-funded social programs whose purpose included targeting poverty, literacy, and hunger in Venezuela.

Chávez had hoped to expand PDVSA so that Venezuela could become more independent of the United States.

PDVSA eventually opened an office in China with plans to expand in the region, and also struck a deal with Petrobras, a Brazilian oil company, to build an oil refinery in Brazil. In Ecuador, Venezuela agreed to refine crude oil from the country at a discounted price and when Cuba sent doctors, medical personnel and equipment to treat thousands of Venezuelans, Venezuela agreed to sell thousands of barrels to Cuba at a discount of 40 percent.

Venezuelans have thrived under socialist policies

The Bolivarian missions were an integral part of improving the quality of life for the average Venezuelan. Indeed, when one looks at the statistics, it’s easy to see just how the re-nationalization of the oil industry helped so many people.

In 2000, Venezuela’s economy was booming for the first time since its economy collapsed in the 1980s. Venezuelans had grown tired of a government full of corruption, and Chávez became popular with the people because of his promise to return the power of the government back to the citizens.

It was Chávez’s hope that these missions would help the Venezuelan people, and they did exactly that.

Universal access to education dramatically increased literacy in Venezuela and by 2005, illiteracy had been eradicated within the country. The enrollment rate of students in secondary and tertiary educational institutions rose significantly.

Citizens were given free access to healthcare; between the years of 2005 and 2012, almost 8,000 new medical centers were created and the number of doctors within the country increased. The average life expectancy rose from 72.2 years in 1999 to 74.3 years in 2011. The infant mortality rate between 1999 and 2012 decreased by 49 percent, and the child malnutrition rate fell from 21 percent to less than 3 percent.

Minimum wage was increased. Working hours were reduced. Many adults who don’t work, including women (who are most likely to take care of the home) and those with disabilities and the elderly, were still guaranteed pensions.

Between the years of 1995 and 2009, both poverty and unemployment in the country of Venezuela were reduced by half.

All of these things and more were possible with the money coming in from the PDVSA. Still, the United States and other imperialist countries would have people believe that the Bolivarian revolution has not only destroyed the country of Venezuela, but that we have to somehow “restore democracy” there, even though Venezuela is a place where the electoral process is one of the most reliable in the world. In fact, many outside organizations and observers have lauded the country for their high turnout and the transparency involved in each election.

The reliability of the Venezuelan electoral process and the probability of U.S. intervention

Venezuela was the first country in the world to use voting machines that print a receipt for each participant. They utilize modern technology to ensure that all votes are counted fairly by requiring biometric authentication to activate the voting machine (a system that they began using in 2005), as well as the use of physical vouchers that voters put inside the receipt box.

The machines that they use are auditable at each stage, and there are 16 audits done during the election, including audits of the electoral register, the software, and the voting books. Every audit is presided by international observers and representatives from each political party.

At every step of the way, Venezuela ensures that no interference can occur with their electoral process.

There is evidence that the United States was certainly involved from afar, however. There had been an agreement in the works after nearly two years of internationally-mediated dialogue between the Democratic Unity Roundtable (MUD) and President Maduro. It was supposed to break the standoff between the National Assembly, which was controlled by the opposition, and the Maduro administration. They had also hoped to help solve Venezuela’s ongoing economic crisis, which has been the result of capitalist greed from other countries, as well as U.S. sanctions and the Venezuelan petit bourgeoisie hoarding goods to create fake shortages.

At the last minute, the opposition pulled out, refusing to sign the agreement with President Maduro.

Coincidentally, the opposition legislator Julio Borges announced that they would not sign the final agreement on the same day when the U.S. Secretary of State Rex Tillerson ended his Latin American tour. The opposition had called for these elections, and yet were suddenly refusing to participate.

Even Jorge Rodriguez, the Venezuelan communications minister and government representative involved in the talks with Maduro’s opposition, told teleSUR that it had been Secretary Tillerson who convinced opposition to back out of the agreement.

Rodriguez said, “Receiving instructions from the imperial proconsul, [Julio Borges] refused to confirm and ascribe to what we came to do, which was to sign the Agreement of Democratic Coexistence for Venezuela.”

We must defend the right of Venezuela to maintain sovereignty

Since Guaidó made his claim to the presidency, 65 countries have supported him. The United States, Canada, Britain, Israel, Australia and others are among this group.

Conversely, around 50 other countries have spoken out about their support for Maduro, including Russia and China, which are major investors in the Venezuelan oil industry and significant creditors to the government; they could potentially benefit from backing the opposition but stick with Maduro regardless. Cuba, Bolivia and Nicaragua are a few left-leaning governments in the region that also support the Maduro administration. The United Nations still recognizes President Nicolás Maduro.

The government still remains under attack by the U.S. and their imperialist allies. The U.S. is no stranger to inserting itself into other countries’ politics; in fact, according to one expert, the U.S. has meddled in foreign elections more than 80 times since World War II alone. When counting coups d’état that the government has supported, the U.S. has knowingly been involved in several during that same time period, including coups in the Latin American countries of Guatemala in 1954, Dominican Republic in 1961, Brazil in 1964, and Chile in 1973.

The U.S. government has intervened in Venezuela alone numerous times over the years. When President Chávez was in office, there were numerous attempts on his life that he often blamed on the U.S. In April 2002, a coup was carried out against the Venezuelan government in which the U.S. played a role. The coup was briefly successful, but only for about two days, at which time Chávez was reinstated as president.

As recently as 2015, the U.S. supported another coup in the country. In February of that year, Antonio Ledezma, the former mayor of the Venezuelan capital of Caracas, was arrested for taking part in an attempted coup against the Maduro administration. The plot was uncovered hours before U.S.-backed Air Force officials had planned to bomb strategic targets in the capital with the hopes of assassinating President Maduro himself.

Additionally, just last year, there was an attempt on Maduro’s life, a desperate move to oust the president when imperialism has failed at doing so thus far.

The U.S. has been trying to change the administration for years and they have latched onto Juan Guaidó’s claim in order to help remove power from the current government. Socialism has proven to be a threat to the interests of capitalists and imperialists all over the globe, which is why they are fighting so hard to end the Bolivarian government of Venezuela, which has been paving the way for socialism with its policies for the last 20 years.

We must support Venezuela in their right to national sovereignty. President Nicolás Maduro was elected fairly and democratically and it is not up to outside forces to determine what is “right” for Venezuela.

Juan Guaidó stood in the middle of a street and told his supporters that he was the rightful president. He was never elected by the people, yet the U.S. has turned over all of the Venezuelan money held by U.S. banks to him. There was no electoral process, and there was nothing legitimate at all about his claim; even so, the United States and nations like it would have you believe that’s democracy.