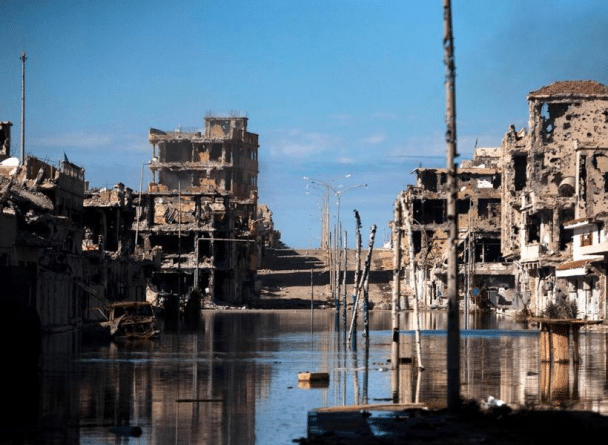 Editorial note: From the first months of last year, this platform made a clamor about the serious consequences that military interventions have brought with supposedly humanitarian purposes. Now that the Venezuelan opposition, articulated under the absolute tutelage of Washington, draws a new “D-Day” (on February 23) for the entry of “humanitarian aid”, it is convenient to refresh the memory and look at recent historical examples of the social tragedies that have left behind this method of regime change. But above all, and hence the validity and interest of republishing this research, it is necessary to insist on the characters and agendas that have presaged, for some time now, that a credible threat of military intervention looms over Venezuela. Without further ado, let’s remember.

The 21st century was inaugurated by a new mechanism of intervention and war against sovereign nations promoted by the official high command of the Pentagon and its European “partners” of NATO. This is the “humanitarian intervention”, a geopolitical tool used in some regions of the world in the framework of the strategy conceptualized by military intelligence advisers such as Thomas Barnett and supported by the US bureaucracy by the retired Admiral Arthur K. Cebrowski.

The aforementioned Pentagon plan for the planet is based on the binary division between North (“the Functioning Core”) and Sur (“Non-Integrating Gap”). In the map below, taken from a presentation by Barnett in 2003, we can see that at the top are the countries of the so-called “First World”, where large private capital and business are concentrated and political stability is intended to be reserved; in the lower part, in red, the “Third World” is drawn, an entire region that would be destined, according to the US military, to “balkanize”, that is, to be dismembered territories, absorbed in chaos, from which wealth is captured by great central capitals of the North for their own opulence. Precisely the term “Balkanization” was coined after the first experience of “humanitarian intervention” in the world, with the instrumentalization of human rights and international laws in favor of the strategic interests of NATO, applied to the former Yugoslavia. Let’s review this and four other cases of this type of war (and its variants) to call attention to Venezuelan news in the context of this US military plan and Antonio Ledezma’s proposal to request an intervention in this style. In 1999, NATO bombed Belgrade, one of the oldest cities in Europe, in the framework of the (manufactured) armed conflict between the Albanian separatists of the Kosovo Liberation Army (KLA) and Yugoslavia’s military and police forces, at that time integrated by Serbia and Montenegro.

According to the top NATO leaders, the Yugoslav government had created a “humanitarian catastrophe” under the pretext of an alleged genocide (ethnic cleansing) of the Kosovars. The measure that the Gringa-European organization (NATO) would take was not sanctioned by the Security Council of the UN, a question that we know they did not care about.

The air raids were carried out from March until June 10, 1999. According to estimates published by Sputnik Mundo , some 2,500 people died under the bombings and more than 10 thousand were injured. The economic damage was estimated between 30 thousand and 100 thousand million dollars. The partition of Yugoslavia into “republiquetas”, with the interlock of a huge US military base in the heart of Kosovo, was known as “Balkanization”, since it enlarged the legal-political landscape on the Balkan map.

Kosovo is currently the product of this “humanitarian intervention”, a logistic center for drug trafficking and the arms market in Europe, and functions as a “factory of Albanian-Kosovar terrorists” fighting in the ranks of Daesh in the Middle East and part of the Balkans to Asian territory. A whole paradigm. One of the most transcendental fake news in recent history, that of Saddam Hussein’s “weapons of mass destruction”, was used against Iraq for its invasion. The Bush administration used false evidence to involve numerous countries in supporting the military operation that later occupied Iraqi territory, as Saddam’s government allegedly used such weapons against the Kurdish population.

For years, the US and its “allies” maintained an economic and financial embargo on Iraq that made precarious the conditions of food and medicine, which served the West as a justification for “humanitarian intervention.” This along with the “weapons of mass destruction” were the mediatic carrot to the military club.

The operation was sold based on nothing, under the pretext of the “freedom” of the Iraqi people, because after the arrival of the US and British troops, they found no evidence of the aforementioned weapons.

Between March 30 and May 1, 2003, the armies of the United States, the United Kingdom, Spain, Australia and Poland invaded and took control of the Iraqi government. Only 5,500 soldiers and mercenaries from private security companies were killed in the American side. The Iraqi dead, according to different sources, (between 500 thousand and one million) among them 120 thousand were civilians.

It is worth noting that from the ethnic wars manufactured in Iraq and by the intervention carried out by the US military, the well-known Islamic State was born, which in 2014 took the city of Mosul. Western media viralized montages and false news about the alleged massacre perpetrated by the government of Muammar Gaddafi against the Libyan population. Under the figure of Responsibility to Protect (R2P), the US took the lead together with NATO to invade and bomb Libya, and thus allow access to mercenary-terrorist groups to take over the main regions of the African country.

Libya was labeled a “humanitarian crisis” with the intention of thickening the intervention file, despite the fact that the country lived one of its most prosperous eras under the aegis of Gaddafi’s Arab socialism.

The color revolution in Libya began with “peaceful” protests that ended in assassinations under the use of conventional weapons by demonstrations against Libyan security forces. The civilian deaths were attributed to Gaddafi and his government, while the Pentagon prepared the approval of Resolutions 1970 and 1973 before the Security Council of the UN, which authorized a zone of no flight in Libyan territory. The consequences are evident today, where the once most prolific country in Africa is now a stew of chaos.

Figures contributed by Telesur illuminate more than 20 thousand people killed by the “humanitarian intervention”, in addition about 350 thousand refugees due to the crisis caused by the war. Between extreme poverty and civil war, which began in the early 1990s, Somalia has experienced one of the worst famines in the history of mankind. According to the Red Cross, it has killed 1.5 million people. The opinions of the IMF and the World Bank on economic and monetary policy on the Somali government of the dictator Mohamed Siad Barre, an ally of US oil companies, caused this lamentable result. The local bands in conflict contributed with the smuggling of food for arms with western contractors.

In 1993, the Pentagon used the “humanitarian intervention” tool on Somalia with 30,000 marines, in an operation called “Restore hope”. Conoco Somalia Ltd., a gringo oil company, was the only major transnational that maintained an active office in the capital Mogadishu before and during the invasion. The company ceded its infrastructures and facilities in Mogadishu to be used as an embassy and headquarters for the special convoy of US troops.

Reports indicate that hunger and the health crisis in the African country multiplied to 10 times worse than at the beginning of the war. The “humanitarian aid” was only a camouflage for the militarization of the general resources and the beginning of the project of “Balkanization” in the Horn of Africa, where USAID has more business in progress, a region forgotten by the world.

The abuse in the number of US invasions and occupations of Haiti in the history of the last century showed the US that it should think of a new pretext to re-militarize the Caribbean island. In 2010 there was one that, to add to the tragedy of 222 thousand 570 people killed by the earthquake , and that left 1.5 million people homeless and material losses calculated at 7 thousand 900 million dollars, also had a lucrative character.

The new Haitian “humanitarian invasion” of the US and the UN took control of the island and installed the MINUSTAH mission with more than 7,000 soldiers and police. Hundreds of complaints of criminal abuses (sexual and of violence)  of the foreign security forces (Blue Helmets, US Army) on the Haitian population and, in addition, the UN received a legal demand from the Haitians themselves who suffered from the epidemic of cholera caused by the multilateral organization. The disease killed more than 8 thousand 300 people and made more than 650 thousand sick since October 2010, almost 7% of the population. The UN did not respond.

But the recolonization of Haiti came with a multimillion-dollar swindle and a targeted assassination: Klaus Eberwein , a former official of the State of Haiti, was found dead in July 2017, who claimed to denounce the Clinton Foundation before the Senate of his country for fraud and corruption in Haiti. the framework of “humanitarian aid” from the West to the island. Eberwein affirmed that 0.6% of the donations granted by international donors to the Clinton Foundation, with the express purpose of directly helping Haitians and rebuilding vital infrastructure after the 2010 earthquake, ended up in the hands of Haitian organizations. Another 9.6% ended up in the hands of the Haitian government. The remaining 89.8%, or 5.4 billion dollars, was channeled to non-Haitian organizations, and the main responsible party is the entity that runs it, the Clintons.

It was a “humanitarian aid” that did not help.

THE “HUMANITARIAN” INTERVENTION PLAN IN VENEZUELA

The fugitive from justice Antonio Ledezma has been touring several countries in the West in order to promote the so-called “humanitarian intervention” to overthrow the Bolivarian Government in the name of “civil society.” International representative of the group “I am Venezuela”, the former mayor of Caracas became owner and master of the interventionist spokesmen against the country that saw him being born, and despite the record of this type of military actions by the US and CIA, he remains committed to lobbying along with other leaders of Voluntad Popular and Primero Justicia, resources of soft power and hard power over Venezuela that lead to a “humanitarian intervention”.

Ledezma has met with at least a dozen high-ranking politicians from around the world, such as the governor of Florida, Rick Scott; the Latin American presidents Sebastián Piñera, Mauricio Macri and the former president (for corruption) Pedro Pablo Kuczynski, and the vice president of Panama; with the Europeans Emmanuel Macron, Mariano Rajoy; the vice president of the USA, Mike Pence; to name a few in recent date.

A landscape of national destruction and death is the end of the request of Antonio Ledezma, as happened with Yugoslavia, Iraq, Libya, Somalia and Haiti. We do not say it, but history.