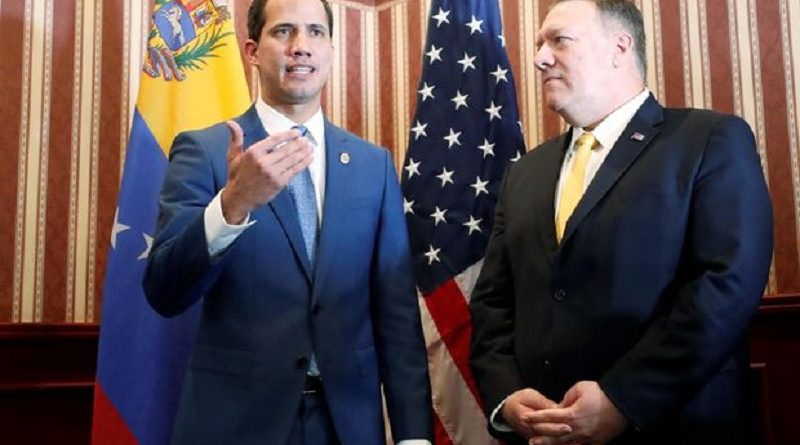 A meme circulating on social media shows the distraught gaze of Venezuela’s opposition member Juan Guaidó with a caption that says in part, “he is not a head of State, he has no army, he has no ministers, he never participated in presidential elections, he was a ‘guarimbero’ [violent rioter] and he is called interim president.” None of that can be argued. But as of January 5 Guaidó is also no longer the president of the National Assembly. Despite a theatrical take over of the NA chamber and proclaiming to still be the president – well documented on video – in reality he lost that position to a rival opposition leader. We have already described that as the most public display of the split between competing opposition groups.

More recent developments confirm how the deep division and in-fighting within the Venezuelan opposition can become much more intricate and even dangerous under the watch of the US government and other countries that decide to illegally intervene.

Following a media conference in Caracas as the elected president of the NA, Luis Parra seems to favor a rapprochement with the US when he tweeted his “demand” that Maduro “immediately” re-establish diplomatic relationship with the US and other Latin American countries. Any hope that he might gain some political favors from a Trump administration that has sanctioned him seems to be far-fetched.

RELATED CONTENT: Why Did the US Build an Emergency International Tour for Guaido?

At the same time Parra asked to have an audit performed for the alleged embezzlement of the “$490 million” that Guaidó received from the USAID. By the USAID own admission, in reality Washington has given $654 million in “humanitarian assistance…to tackle the crisis caused by Maduro” since 2017 – the year of the most violent opposition riots (guarimbas) in Venezuela. Considering that a large portion of that “aid” “provides compensation, travel costs and other expenses for some technical advisors of the National Assembly and the interim Administration of Guaidó”, and also taking into account reports that a large portion of that money is used to “pay for embassies, ambassadors [and] a National Assembly office in Caracas”, Parra appears to have a legitimate concern as the elected NA president.

In the meantime as we write, Guaidó has been received in Colombia by president Ivan Duque and has met with US Secretary of State Mike Pompeo to discuss “counterterrorism” and “counternarcotics” cooperation. This is taking place in one of the major drug-producing and -exporting countries of Latin America that terrorises its population with continued paramilitary killings. Following his “presidential” treatment, Guaidó will travel to Davos, Switzerland for the World Economic Forum. He will rub elbows with billionaires, world leaders and CEOs whose least concern will be Venezuela or Guaidó. The Forum in Davos this year will have a showdown about climate change. However, he will have a chance to hold talks with the European Union’s foreign policy chief Josep Borrell in Brussels.

While the two contenders to the National Assembly push their own agenda, Maduro seems to be more solid as the legitimate president in control of Venezuela. At least we read that much in the title of the Washington Post report following a one-hour-long interview with Maduro in Caracas. Unfortunately, instead of printing the textual unedited interview that would have given readers an objective firsthand insight into Maduro’s thinking process, the WP produced a heavily edited article with biased language such as Venezuelan “authoritarian government” and “socialist state”, and with misplaced input from opposition sources such as fugitive Leopoldo Lopez, which predictably counter Maduro’s statements. Perhaps the most misplaced piece of (mis)information is the WP claim that “Maduro has sought to buy and extort opposition deputies to leave Guaidó”

RELATED CONTENT: Not Understanding What Happened in the National Assembly on Jan 5th? All the Answers Here

In one rare sign of objective reporting by the WP, Maduro is acknowledged as “president” and Guaidó as a NA “deputy”. From the interview we also learn about Maduro continued willingness to establish a dialogue with president Trump (and the opposition) “as long as it is based on mutual respect between both governments”. However, it is doubtful that Washington will accept such an open invitation from Caracas.

The US government is set on its goal for regime change in Venezuela at all cost. It has tried using various approaches such as a direct coup in 2002, a parliamentary coup with a NA controlled by the opposition, and the fabrication of a parallel presidency or NA. Apparently all attempts may have actually initially failed due the internal divisions and in-fighting within the opposition. However, in a typical Hybrid Warfare scenario, divisions and the creation of parallel groups or institutions, like it is now the case in Venezuela, may actually be turned into an asset.

US Hybrid Warfare tools are numerous and internal divisions have proven to be an effective tool in other geopolitical areas. In fact, when no divisions are present then they must be created or faked. Washington’s initial frustration about the political divisions and in-fighting of the Venezuelan opposition now may be turning into a boon.

The jewel on the crown of all political divisions for the US strategy would have been a split between the military and the government like it happened in Bolivia. This is not the case in Venezuela. But this is not the time for Venezuelans to be relaxed. Despite the truth in the meme about Guaidó not having real political power, he does have the might of the US empire and stolen money from the Venezuelan coffers on his side.

The Bolivarian Revolution must remain vigilant and on guard for the sake of the millions of Venezuelan supporters and internal peace.