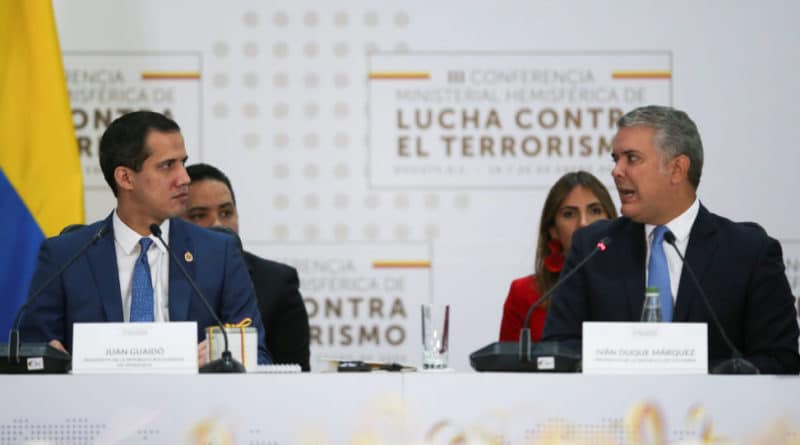 The United States organized an international tour for Venezuelan anti-Chavista deputy Juan Guaidó with a first stop in Colombia. In Europe, Guaidó participates in several meetings. What is the purpose of the tour and why does it happen at this time?

Guaidó made his appearance in Colombia next to the president of the country, Iván Duque. The trip to Bogotá of whoever is president of the National Assembly (AN) was not announced and {Guaido’s trip} was presented by the media that support it as a triumph because he is prohibited from leaving Venezuela.

The first photo was next to Duque and the vice president, Marta Lucía Ramírez, where Guaidó was seen walking along a red carpet to shake hands with the president of Colombia from a step below, and then sitting in a room without presidential protocols. The photos are not a mere detail in politics, particularly in the case of Guaidó and his crisis.

“It is important to understand that all the legitimacy of Guiadó is based on international recognition, on having ‘photos as president’. And in the context of losing a presence in the AN, these photos are crutches to keep him in the news as president (self-proclaimed from Venezuela),” Venezuelan lawyer Ana Cristina Bracho, a Master in Public Law and Fundamental Rights, told Sputnik.

The objective of the photo was achieved upon arrival in Colombia, and reinforced with the most important moment for the narrative built around Guaidó: the meeting with the US Secretary of State, Mike Pompeo, and the special envoy for Venezuela in the United States, Elliot Abrams.

Guaidó appeared, in this way, in the international arena with those who lead and finance the strategy against Venezuela, that is, they tell him what and when to do things. An image, however, photographed with smiles in a time of crisis.

The retreat of Juan Guaidó

The arrival of Guaidó in Colombia happens at a time of deep crisis for the Venezuelan opposition. The main break point was on January 5, when Guaidó lost the Presidency of the Legislative Power, despite having proclaimed himself in office from outside Parliament.

“The AN lost, failed in its calls for opposition and was reduced to holding unofficial assemblies outside the parliamentary area, while its allied parties collapse due to the accumulated fractures,” said the lawyer.

The image of Guaidó is at its most negative moment in the country. That crisis was developed during the last months due to several corruption scandals, and especially because of his inability to translate announcements into actions: Guaidó sold a promise of victory that never happened and a large part of those who believed him are disappointed.

He is no longer the emerging self-proclaimed president in charge of Venezuela on January 23 of last year, projected through a powerful political, media and economic machine. He fails to mobilize the opposition bases within the country, he no longer presides over the Legislative Power, he has lost credibility, his government fiction is naked.

What still preserves Guaidó is the international support of those who conduct the coup operation against the Venezuelan government, that is, the United States, which has one of its main bases of operations in Colombia to deploy the actions against its neighboring country.

Guaidó was accompanied in Bogotá by other leaders such as Julio Borges, a fugitive from justice for his participation in the assassination attempt of the president of Venezuela, Nicolás Maduro, in August 2018.

Borges, as well as several leaders wanted by the Venezuelan justice, resides in Colombia, a country that Bracho characterizes as “fundamental for the opposition”, and as an “American enclave that has relevance even in the future NATO conflicts with Iraq, where it is expected that Colombia will actively participate.”

The Colombian territory has been a platform for operations against Venezuela in the most important cases of recent attacks: those who tried to kill Maduro were trained there, and from there the operation was started to try to enter Venezuela by force on February 23, with the presence of the US vice president, Mike Pence, in the same border territory.

That opportunity was the only time Guaidó left Venezuela. Their border crossing, presented in their networks as a work of their bravery, was actually the product of their alliance with Colombian paramilitaries in the border area, the Los Rastrojos terrorist group, allied with the government of Colombia.

What can the US do against Venezuela?

The departure of Guaidó to Colombia gives him a brief moment of news and photographs, but does not solve the main problem: what to do to make the coup strategy work in Venezuela after successive defeats? The answer to that question does not depend on Guaidó, nor on Borges, nor on the Venezuelan factors on the right, but on the US.

“The United States can try several things, in fact, that is one of the statements that Washington has maintained,” says Bracho.

The narrative of the US government has been to affirm that all options are on the table, although the military possibility has been relegated by several spokesmen of the administration, including Pompeo himself.

What can the US try then? “You have to consider what weakness there is in the United States, between the impeachment and the debates between Congress and the White House about the latest actions on Iran,” explains the Venezuelan lawyer.

The elections in the USA

Washington faces a problem of time: while its operations via Guaidó and armed groups do not give the expected results, politics in Venezuela are heading towards the stage of the constitutional parliamentary elections planned for 2020.

That near electoral horizon is driven both by Chavismo and by an increasingly large sector of the opposition that detached itself from the strategy conducted by the US. The objective is to reach a political agreement for the contest, which has as its first point to achieve a renewed National Electoral Council. Once this step was taken, the elections will be called, a call that will further divide the parties that still remain around the script directed by the US.

The United States thus faces a sustained crisis in Venezuela. The international tour built for Guaido seeks to give him political oxygen, showing him not only with Duque and Pompeo but also with, for example, the high representative of the European Union for Foreign Affairs and Security Policy, Josef Borrell.

The main question remains on the table: how does the US plan to resolve its operation in Venezuela of overthrowing the government? President Nicolás Maduro, on the other hand, has expressed -again- his willingness for dialogue, discarding the idea of leaving political power that a “transitional government”, as Washington calls it, may be formed.

“I believe that Mike Pompeo has failed in Venezuela and is responsible for the failure of Donald Trump in his policy towards our country,” Maduro said in a recent interview. Will the US continue with the same strategy and greater despair? Part of that answer will be known in the coming days and weeks.