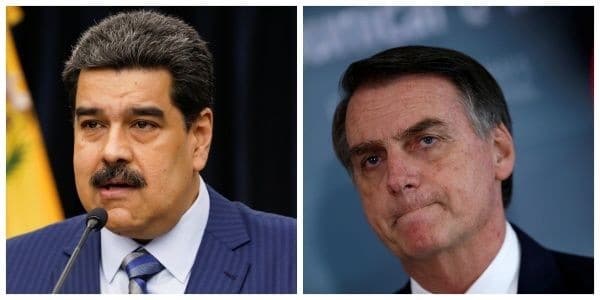 Venezuela “would never attend the inauguration of a president who is an expression of intolerance, of fascism” responded the Bolivarian Government to the invitation.

Through his Twitter account, Venezuelan Foreign Minister Jorge Arreaza made public the two diplomatic notes that the Government of Brazil sent to the Government of Venezuela in November, inviting President Nicolás Maduro to the inauguration of Jair Bolsonaro. Also, the chancellor showed that it was the Bolivarian Government itself who refused to participate in the inauguration of the Brazilian president-elect, to be held on Tuesday, January 1, 2019, revealing the document that gives an account of it. “The Socialist Government, Revolutionary and Free of Venezuela would never attend the inauguration of a president that is an expression of intolerance, of fascism and of giving to interests that are contrary to Latin American and Caribbean integration, “says the official response that the Ministry of Foreign Relations of Venezuela sent its pair to Brazil this Wednesday December 12.

The publications of Chancellor Jorge Arreza were to deny the false information emanated by the future Minister of Foreign Affairs of Brazil, Ernesto Araújo, announcing this Sunday on his Twitter that the administration of Jair Bolsonaro had not invited Nicolás Maduro “in respect to the people Venezuelan”.

This, despite the fact that the Venezuelan Government’s rejection of Araújo’s invitation was received directly by him last Wednesday: “Regarding the Venezuelan people, we do not invite Nicolás Maduro to President Bolsonaro’s possession. for Maduro in a celebration of democracy and the triumph of the Brazilian popular will, all the countries of the world must stop supporting it and unite to liberate Venezuela, “Araújo wrote.

Despite the clear evidence that exposes the deception on the part of Bolsonaro and Araújo to justify the coming absence of President Nicolás Maduro on January 1, the international media replicated the information of the future Brazilian chancellor to attribute to his administration the decision. The documents disarmed the lie.