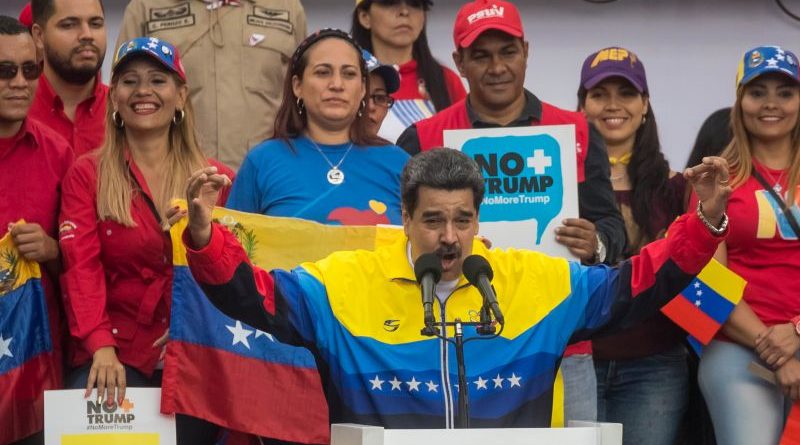 The Maduro government seems to show a better understanding of the world order, the role of the UN and the mustering of public support.

In political terms the government of Venezuela had a good month of July while managing very critical economic circumstances. Reps of 120 Non Aligned Movement (NAM) countries attended their ministerial meeting in Caracas, and more than 700 delegates from dozens of leftist parties and social movements from about 32 countries were in attendance for the 25th encounter of the Sao Paulo Forum (SPF) also in Caracas a few days later. Even the quick recovery from what appeared to be another sabotage to the electric power grid that occurred in the days between the two meetings was seen as a sign of an efficient and responsive government fully in control.

However, the month of August had a more challenging beginning for Venezuela. But we think that the Maduro government still retains full command of the political situation.

On August 5, the day before the meeting of the so-called Lima Group in Lima, Peru, United States President Donald Trump signed an Executive Order on “Blocking Property of the Government of Venezuela”. This may well be the most severe unilateral coercive measure (sanctions) against Venezuela to this date. It also meets the criteria of a total blockade on the country, despite Secretary of State Mike Pompeo’s denial that “this is not an embargo”.

The more serious and controversial issue of the Trump’s executive order is that it implies the possibility of its extraterritorial application. US National Security Adviser John Bolton left no doubt about that intention saying that the order “also authorizes sanctions on foreign persons who provide support or goods or services to any designated person, including the government of Venezuela.”

The EU immediately opposed Washington’s threat and other countries may follow. But we know that Trump is not shying away from his version of “if you’re not with us, you are against us”. He has recently implemented, for the first time since 1996, Title III of the Helms-Burton Act (blockade) on Cuba, which allows US persons, whose property was taken over by the Cuban Government after 1959, to sue in US courts companies and individuals who “traffic” in those properties. This has serious implications for many foreign companies in Europe and Canada currently operating in Cuba.

The US blockade of Venezuela is intended to “make the Venezuelan economy cry”; nevertheless, the blockade does not guarantee the collapse of the economy. After almost 60 years of persistent and harsh US blockade, Cuba’s economy has done fairly well in maintaining its socialist project, initially with the support of the former Soviet Union, and since the early 1990s with the development of a thriving tourist sector that has brought substantial foreign investment to the chagrin of the US government.

Therefore, in geopolitical terms, the extraterritorial element of the blockade on Venezuela is the US second line of attack – unlikely directed at the EU or Canada that have recognized self appointed “interim president” Juan Guaidó – rather directed at Russia and China that have sided in words and deeds with the elected president Nicolás Maduro.

Russia has not only sold military equipment to Venezuela and trained its military, but last July 10 the two countries have signed a protocol on facilitating Russian state-owned oil company Rosneft’s activities at two gas fields on the continental shelf of the Bolivarian Republic of Venezuela.

RELATED CONTENT: US Imperial Decline and the Belt and Road Initiative: The Most Important Global Struggle of the Century

Enter John Bolton with a threatening message in Lima: “to both Russia and China, we say that your support to the Maduro regime is intolerable, particularly to the democratic regime that will replace Maduro.”

Both in tone and actions Washington is sounding increasingly desperate and frustrated at the lack of tangible results in its effort at regime change in Venezuela. The US has usually been absent at meetings of the “Lima Group”; it is not even a member of it. Canada has normally taken on the “leadership” role with other dozen or so nations.

The Lima meeting was clearly driven by a combative US government with the high profile presence of NSA John Bolton and Secretary of Commerce, Wilbur Ross. If Bolton struck Washington’s stick, Ross offered its carrot as a vague recovery plan for Venezuela after Maduro. Of the 100 governments invited, only about 60 reps were present, mostly observers. Many declined including Russia and China.

If Washington’s intention was to bring on board more international allies, the strategy didn’t work. The UN Assembly would have been a larger and captive audience. Why was that venue not chosen?

The answer lies in the balance of support for the Maduro government. While reportedly about 50 governments do not, 120 NAM governments showed their support with their presence and joint declaration in Caracas in July. That is almost one third of the UN state members.

The Maduro government seems to show a better understanding of the world order, the role of the UN and the mustering of public support. This spells failure of the US blockade as it did in the case of Cuba at least politically. Caracas is still in control. It has not only denounced the White House executive order calling it “economic and political terrorism” illegal according the UN Charter, but it is also making a direct appeal to the UN. As we write, a campaign to collect signatures for a “Letter from Venezuelans to the Secretary General of the United Nations” is underway. All world supporters are invited to sign as well.