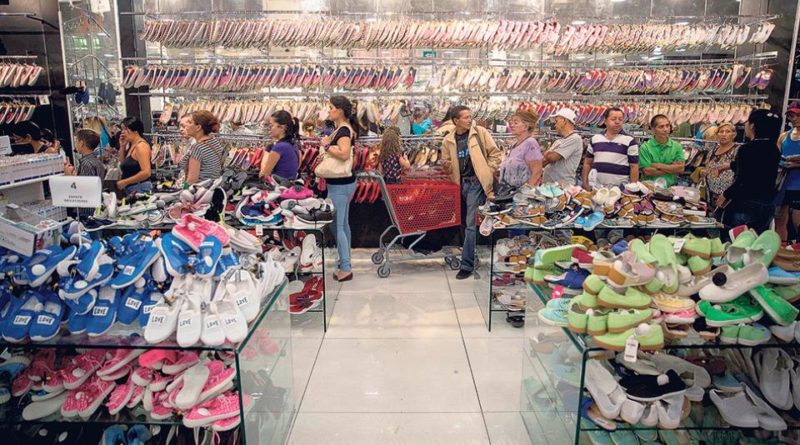 Caracas lives a quieter December than in previous years

You breathe a certain calm. There are big lines in the streets, this time not due to shortages, but to spend the Petro cryptocurrency bonus, in a context of economic crisis.

No one knew in January what the end of the year situation would be in Venezuela. Few, very few, imagined that it would be calm and that there would be great queues in the streets, this time not due to shortages like in 2015 or 2016, but to spend the Petro cryptocurrency bonus granted by the government for the holidays.

Caracas lives a December with greater tranquility than in previous years. The economy, in a dynamic of blockade and crises – overlapping parts -, has left greater spaces of respite for the population. Fireworks have been seen, Christmas tables with the pernil delivered by the government, permanent consumption in the main streets of Caracas.

This is situation has lasted for several months and has generated a plateau on the surface of an economy whose GDP has contracted by more than half in six years. A scenario marked by the emergence and consolidation of a dollarized sector of the population, the use of that currency in commercial transactions in working class neighborhoods or wealthy areas, and the multiplication of informal jobs before the sustained decline in formal wages with the devaluation of the national currency and the increase in prices.

The situation in Caracas is more stable than in the other parts of the country. No fuel lines are seen as in the roads or cities of the countryside, the electricity supply has been maintained with few reports of outages, and a circuit of consumption has been consolidated for the minority that lives and thinks in dollars.

It was difficult to forecast this December at the beginning of the year with the self-proclamation of Juan Guaido or the attempted entry by force from Colombia on February 23. Nor in March, with the national blackout / sabotage that left the country in the dark for several days, or on April 30, with Guaidó and Leopoldo López next to a handful of military weapons in the streets.

The offensive seemed almost unstoppable, not only because of the first moment of strength of the Guaidó formula and its appeal to the Venezuelan opposition that was mobilizing again, but mainly because behind or in front of the self-proclaimed was always the US government.

The role of the United States (USA) was explicit throughout the year. John Bolton, former security advisor, said they had no problem talking about the Monroe Doctrine, and, to keep the Venezuela brief, he named Elliot Abrams, a man who led the dirty wars in Central America in the 1980s, with a proven record like the massacre of El Mozote, in El Salvador.

The alignment of Donald Trump, Mike Pompeo, Bolton, Abrams, the anti-Castro axis headed by Marco Rubio, and the rarely visible powers of the Deep State, formed a final assault box. That calculation of forces was wrong for those who led the offensive: not only does Nicolás Maduro remain in the government, but Guaidó and the opposition as a whole go through its worst months.

The crisis on the right has several overlapping elements: corruption scandals within the National Assembly (AN), the division between those who see possible agreements with the government for, for example, the legislative elections planned for 2020 , and those who only back a forced departure, and the question of the presidency of the AN that must be renewed on January 5.

RELATED CONTENT: Pro-Coup Venezuelan Soldiers Who Fled to the US Now Locked Up in ICE Detention Center

The US bet is to keep Guaidó. They have already affirmed, anticipating an adverse scenario, that their support is not for him as a person, but for the presidency of the only institution they recognize as democratic. His stay there would be to sustain the current correlation of forces, while his displacement could mean a setback for the US, as well as a new expression of its inability to resolve the Venezuela issue.

The next key step after Jaruary 5th will be the call for legislative elections. At the moment the topic of conversation of the majority of the population is the bonus given by the government (in Petros), the recognition of the effort, or its questioning by opponents who consider it as an instrument to control the population and maintain the same unresolved picture, the economic crisis.

The underlying problems hardly have a solution in the short term, due to the impact of the economic and financial blockade that will continue to escalate as announced by the US, due to the low oil production that at times manages to stabilize at one million barrels per day, or the lack of capacity of the electricity sector to supply the current national demand.

The economy is in the process of transition and metamorphosis in a combination of a scenario of war and orientations rarely explained by the government. It is a complex picture, marked in turn by emigration and its consequent remittances that bring dollars into the popular neighborhoods and middle classes.

Venezuela ends a year that has seemed to be many more. These days in the working class neighborhoods the bonuses are spent, the New Year’s tables are prepared, the courses with salsa, trap and reggaeton, those outside the country are missed, the capacity for resilience is put to work for a society preparing for a 2020 that will surely be more complex than 2019.