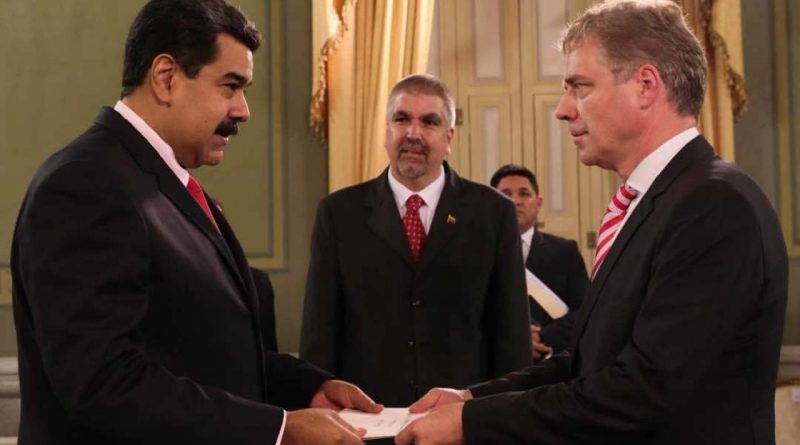 In a piece posted on Bloomberg and signed by Samy Adghirni, this pro-US media outlet disregarding its replication of Washington’s narrative on Venezuela, says a few truths.

The coverage reflects on -just some- of the unreal situations created in terms of International Public Law and International Relations, by the US Regime Change operation using Juan Guaido, and time has shown how defeated and unviable that is. But it also reflects on the humanistic and internationalistic approach of the Venezuelan Bolivarian Diplomacy of Peace dealing with the crisis.

In reference to the German Ambassador in Caracas they write:

But in July, in a sign of the doom surrounding the U.S.-led effort to oust Maduro, the German envoy was back in Caracas and back to his previous duties: dealing with the Maduro government. Two weeks ago he joined European colleagues at a meeting with Maduro’s foreign minister, Jorge Arreaza. Arreaza also held official meetings in Spain and Portugal, which have both aligned with Guaido.

The diplomatic jujitsu is a reflection of a dawning reality: Maduro remains as in charge today as ever, conducting the nation’s business…

The back-and-forth has been head spinning. Earlier this year, Caracas-based diplomats updated contact lists, replacing Maduro associates with those of Guaido. Many military attaches were sent home to avoid dealing with Maduro’s generals. One European country invited only Guaido officials to its national day celebration. To avoid a conflict, a Latin American country called off its annual celebration. Many of the diplomats interviewed for this article spoke on the condition that their country remain anonymous to avoid irritating both sides in the dispute.

In a clear reference to Colombian diplomats:

A couple of months ago, two officials from one of the most aggressively anti-Maduro governments couldn’t get their goods shipped back to their home country because officials refused to stamp the boxes at the port. A customs officer seemed to take pleasure in asking them: “Why don’t you ask Guaido to take care of your move?” The officials’ government sent a solicitous letter requesting customs approval, which ultimately was given.

A Latin American official who is not authorized to discuss the matter publicly said his country made a mistake by recognizing Guaido so quickly. Now, he said, diplomats have to do “crazy things” they never learned from textbooks.

What is becoming clear is that recognition of Guaido will exist at a kind of symbolic level. But despite evidence that tough U.S. sanctions on Venezuela are taking a growing toll on Maduro and his associates, day-to-day business is being conducted with the Maduro government.

The prime minister of Curacao, a Caribbean island controlled by the pro-Guaido government of the Netherlands, recently received Manuel Quevedo, the head of Maduro-controlled oil giant Petroleos de Venezuela SA. They discussed PDVSA’s bid to renew a deal to operate a refinery on the island.

In reference to the irresponsible Brazilian position they say:

… while Brazil fully recognized Guaido’s envoy as ambassador, it has requested and obtained from the Maduro government the renewal of some officials’ diplomatic credentials.

And they wrap it up with this wonderful and very realistic statement by Oliver Stunkel:

All of which shows, according to Oliver Stuenkel, professor of international relations at São Paulo think tank Fundação Getulio Vargas, the limits of diplomatic pressure.

“This was all a big, risky gamble,” he said of the move by foreign governments to replace Maduro with Guaido. “Europeans, no matter how much they may deny it, have already started this process of getting back to business as usual with Maduro. Latin America countries will eventually have to do the same.”