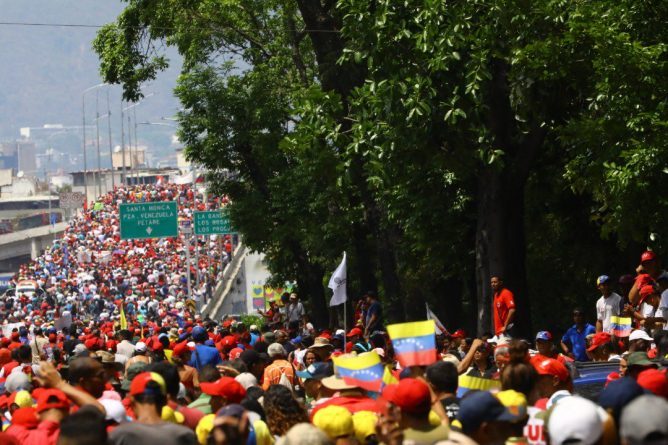 On May 20, a massive rally filled downtown Caracas as Venezuela’s revolutionary movement marked one year since Nicolás Maduro was elected to a second term as president. The celebration comes just three weeks after Juan Guaidó, the Trump-appointed leader of the Venezuelan far right, launched a failed military coup against Maduro.

Since that foolish day, events in Venezuela have accelerated. The opposition lies defeated, and the revolutionary movement advances, millions strong, to with the aim of socialism.

The collapse of the counter-revolution

On April 30, Juan Guaidó declared the “final stage of Operation Liberty.” He called on his supporters to take to the streets and for the military to defect to him and storm the presidential palace. Guaidó made this demand at dawn. By noon, he and his cohort were running to hide in an embassy as the few hundred armed protesters who came to his call were being dispersed, and 80 of the 100 soldiers who defected to his side were surrendering to police. At the same time that this spectacle of malcontent unfolded outside La Carlota airbase in eastern Caracas, over 50,000 workers and “pueblo humilde” encircled the presidential palace, standing guard to defend their revolution with their own lives.

In the days since the crescendo of Guaidó’s ‘Operation Liberty,’ the extent of his defeat has become known. His whereabouts remain unknown, since he was refused entry at the Chilean and Spanish embassies. He is wanted by the police for armed insurrection and treason. The handful of defected soldiers who managed to escape to Colombia are now being told by that country’s government to either seek employment or leave – they cannot sit around pretending they are about to overthrow a neighboring state. Manuel Figuera, the head of the state security service and the highest-level defector to Guaidó, was immediately dismissed and is expected to be found in Colombia as well.

RELATED CONTENT: President Maduro rejected threats against CLAP made by the US government (Video)

Guaidó’s co-conspirators in the National Assembly are in similar dire straits. On May 7, they were stripped of parliamentary immunity and the attorney general opened cases against all seven of them for “betrayal of the homeland, conspiracy, attempt at insurrection, civil rebellion, conspiracy to commit a crime, usurpation of their elected duties, public instigation to disobedience, and hate crimes.” All have fled the country or are in hiding, except for Guaidó’s second-in-command, the vice president of Democratic Action (AD), Edgar Zambrano, who was arrested while attempting to flee with thousands of U.S. dollars and several weapons.

Guaidó’s stunt also led to the collapse of the opposition camp, the Democratic Unity Roundtable (MUD). COPEI, one of the founding parties of the coalition, published an open letter signed by 350 opposition politicians and figures that condemned Guaidó and his support for an invasion of their own country. While they refused to support Maduro and continue to demand his removal from power, the signatories acknowledged that the armed attacks on the government were not a winning strategy.

In a surprise to everyone in Venezuela, Maria Corina Machado – the most prominent opposition figure besides López and Guaidó, someone who openly embraces their bourgeois lifestyle and cannot hide their contempt for the poor – publicly broke with the U.S. narrative and said that “Maduro is not a dictator.” She then went on to say that the opposition’s tactics have failed to dislodge the revolution, nor prevent it from spreading beyond Venezuela, and that the only option left is U.S. military intervention.

When one of the opposition’s top figures believes that they no longer have the popular support to defeat the government, by any avenue, this can only be understood as the opposition admitting that they have been soundly defeated within Venezuela.

At one time, the opposition could call on hundreds of thousands of people – mainly students, professionals and lumpen elements – to take to the streets at their call. Now, after embracing the fascist violence of the Popular Will Party and following the direction of its leaders Leopoldo López and Juan Guaidó, the opposition is socially ostracized, politically illegitimate, and is in open revolt with itself. No wonder then, that the remnants of Guaidó’s conspiracy are rumored to be considering Maduro’s long-offered invitation to peace talks.

“The New Beginning” of the revolution

On the other side of Venezuelan society, we find the Bolivarian revolutionary movement more organized than ever before, and more determined to seize the future.

Just one day after the April 30 coup attempt, hundreds of thousands of workers marched through Caracas in commemoration of May Day. Speaking at the rally at the end of the march, to thunderous applause, was President Maduro. He thanked the workers for standing behind their government against all of the attacks of imperialism in recent years, but he went on to say that it was not enough. Maduro compared the revolutionary movement to a boxer – with one fist, it defends the gains of the process from all threats foreign and domestic, but with the other it must attack, advancing decisively towards socialism. He admitted that errors have been made, making an open self-criticism before all those assembled, and called on the masses to raise up their criticisms of the revolutionary government, to bring forward their own proposals in order to rectify errors, and to ensure that the Bolivarian movement continues to advance. “Let us go on to great changes, to a great renovation, a great rectification that is urgently needed within the revolution,” he declared to chants and cheers. “Towards the New Beginning, always together with the people.”

The events of the “great rectification” over the next two weeks reflect the unprecedented level of organization of the revolutionary movement. Three nationwide gatherings took place simultaneously: the reopening of the Fourth Congress of the United Socialist Party (PSUV), the Bolivarian People’s Congress and the gathering of Bolivarian governors and mayors.

The PSUV Fourth Congress, held in several sessions across the country, brought together delegates from roughly 13,000 Bolívar-Chávez Battle Units (the basic party unit of the PSUV) and 32,000 Local Supplies and Production Committees (the revolutionary committees tasked with distributing free food to families in need). Over 800 proposals were submitted through the sessions, many of them with overlapping ideas. Among them, according to PSUV Bulletin #153, was: ideological training for all public functionaries, employees of state-owned companies and police officers; “the elimination of the ideology of colonialism” in the education system; and the direct involvement of the Party in establishing new “social property enterprises” focused on food production in every municipality within the next six months. The most discussed proposal, however, had to do with the need to establish the new state – the communal state. “The slogan ‘commune or nothing’ must be made reality,” the bulletin declared, “strengthening the communal organization’s ability for economic and productive control.”

The Bolivarian People’s Congress took place on a similar scale to the PSUV, that is to say, staggering. The Congress was established by Maduro to bring together the social formations of the revolution: the communal councils, the communes and the social movements. Its sessions held across the country brought together representatives from all of them – from 47,896 communal councils, 3094 communes and 56 social movements. From this wide net across Venezuelan society, the Congress collected over 21,000 proposals from the masses. Like the sessions of the PSUV Congress, the single-largest number of proposals called for the revolutionary transformation of the state – the creation of the communal state that has been the goal of the Bolivarian movement for years.

At one of the assemblies of the Congress, Education Minister Aristóbulo Istúriz stressed the need for the government and the mass movements to work as one to deepen the revolutionary process. “Here we ratify our loyalty and certainty in the building of the future,” Istúriz declared. “It is not with the escuálidos, nor with the imperialists, but with the people that we solve our problems, it is with the Bolivarian Revolution that we deepen the construction of socialism.”

Time moves fast in Venezuela. It had been moving fast since Maduro was elected in 2013, and it has been moving even faster since Guaidó began his charade in January. Despite the opposition falling flat on their face, again and again, U.S. imperialism has not stepped back from its commitment to crushing the revolutionary movement. Now it knows that, when it makes its final move to bring down the Bolivarian Revolution, it will face a nation of 30 million people as firm as steel, united behind their militias, their armed forces, their mass organizations and their party.

An organized people cannot be defeated – America’s ruling class learned this lesson very well in Vietnam, but it seems that Venezuela must offer it a reminder of this historic truth.