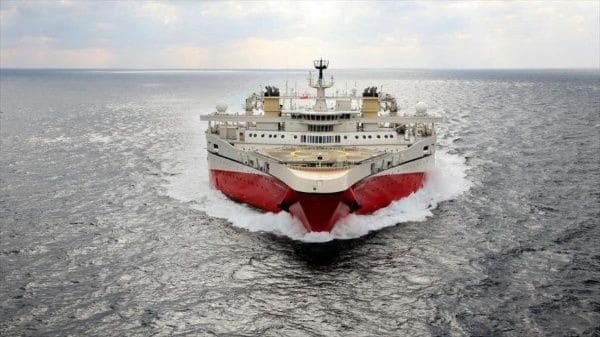 Venezuelan Foreign Minister Jorge Arreaza issued a statement ratifying that Venezuela acted under international protocols and agreements– as usual– in this incident.

The Government of Venezuela, through its foreign minister, Jorge Arreaza, demanded Guyana to respect its sovereignty after the conflict that arose this Saturday after the presence of two ships of the transnational company ExxonMobil, contracted by that country, in Venezuelan waters.

On Saturday night, Guyana’s Foreign Minister had described Venezuela’s maneuver as an “illegal, aggressive and hostile act.” However, his Venezuelan counterpart explained that they acted under international regulations for cases like this.

“In the face of the flagrant violation of our sovereignty by oil exploration vessels contracted by Guyana, the Bolivarian Navy proceeded to apply the corresponding protocols with strict rigor and adherence to international agreements and treaties,” the foreign minister said on his Twitter account regarding the Venezuelan procedure after detecting in its territory the ships not reported. Also, the Government of Venezuela urged Guyana to reestablish “direct and respectful dialogue on this sensitive matter.”

For its part, the Venezuelan Navy assured that one of its ships , the Oceanic Patrol Boat KARIÑA PO-14, had detected illegal exploration activities, for which reason it acted in compliance with the international conventions. Here you can see the exact location: The Government of the Bolivarian Republic of Venezuela informs the national and international community that the Bolivarian National Navy, carrying out its customary patrols through the Venezuelan Atlantic facade, corresponding to the day 22/12/2018, in charge of the Patrol boat Oceanic Kariña (PO-14), spotted the unprecedented presence in jurisdictional waters of Venezuela of two seismic exploration vessels, RAMFOR with Bahamas flag and DELTA MONARCH of the Trinidad and Tobago flag, both hired by the transnational ExxonMobil. The ships referred to were at the coordinates Latitude 09 ° 17 ‘4 “N Longitude 058 ° 15’ 7” W and Latitude 09 ° 15 ‘0 “Longitude 058 ° 17’ 3” W, in the maritime projection of the Orinoco Delta undoubted sovereignty of Venezuela.

In the face of this flagrant violation of sovereignty, the international protocols corresponding to this type of event were applied and national sovereignty was safeguarded with strict adherence to international agreements and treaties.

It is important to note that in the exchange of communication with the captains of the exploration vessels, these argued to have a permit from the government of the Cooperative Republic of Guyana to operate in said maritime space. He proceeded to inform them that the country has no jurisdiction in the maritime projection of the Orinoco Delta, because of which raised their fatigues and sailed into waters of the vast area claim that projects the Esequibo area.

The Government of the Bolivarian Republic of Venezuela has informed the Secretary General of the United Nations and transferred the corresponding note of protest to the government of the Cooperative Republic of Guyana to this unacceptable violation of national sovereignty, beyond the territorial dispute over the Guyana Essequibo, has traspase with this unprecedented raid all boundaries, attempting to explore in maritime areas of the projection of Delta Amacuro, of unquestionable sovereignty of Venezuela [not even in dispute by Guyana].

El Government of the Bolivarian Republic of Venezuela based on the Bolivarian Peace Diplomacy reiterates the Cooperative Republic of Guyana the called to re-establish direct and respectful dialogue on this sensible matter, while at the same time guaranteeing its firm determination to defend the territorial sovereignty of the Republic and the interests of the Venezuelan people based on the most scrupulous respect for International Law.