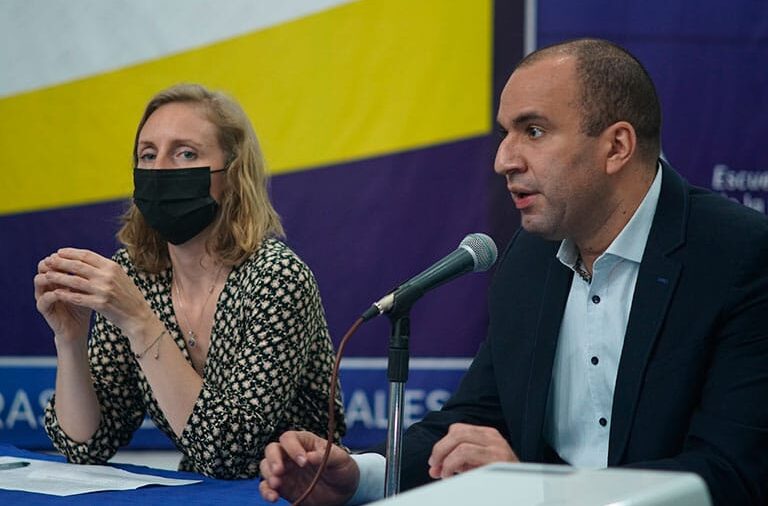 The executive secretary of the National Human Rights Council, Larry Devoe and the coordinator in Venezuela of the Oacnudh, Helene Devaux. Photo courtesy of Ultimas Noticias.

Representatives of the main Venezuelan institutions with competence in human rights began a training program on human rights. The training program is part of the cooperation and technical assistance established in the Letter of Understanding signed between the Venezuelan government and the Office of the High Commissioner for the United Nations for Human Rights (OHCHR).

According to a press release by the Venezuelan ministry for foreign affairs, the program is held within the cooperation work plan that Venezuela signed with the aforementioned UN office, and it is addressed to bodies and agencies of the justice system as well as state institutions that have direct jurisdiction on human rights.

The executive secretary of the National Human Rights Council, Larry Devoe, and the OHCHR coordinator in Venezuela, Helene Devaux, began the training that took place in the Auditorium of the National School of the Judicial System, in Caracas.

Devoe explained, “The program also seeks to educate teams to replicate this knowledge within their agencies. This reinforces the policies that are underway in each of our institutions to incorporate human rights as a transversal axis, not only in the training of public servants but also in their daily actions, for the benefit of the citizens of our country.”

The general module of the training program addressed Human Rights Education and included a videoconference by the Costa Rican UN specialist, Randall Brenes. It also included a practical group activity led by the OHCHR Official in Caracas, Víctor Elías.

The Venezuelan State signed a Letter of Understanding in 2019 through the ministry for foreign relations with the OHCHR, led by Michelle Bachelet, to cooperate and provide technical assistance in a coordinated manner in the state activities susceptible to human rights violations in the country. It was renewed for an additional year in 2020 and 2021.

Featured image: The executive secretary of the National Human Rights Council, Larry Devoe, and the coordinator in Venezuela of the OHCHR, Helene Devaux. Photo from Últimas Noticias.