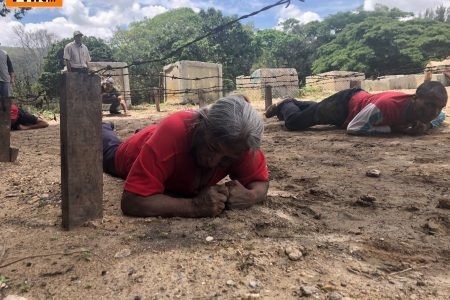 CARACAS – Tactical Method of Revolutionary Resistance Venezuelan brings a complex of exercises to civilians to prepare them for the worst scenarios in the national territory. Members revealed the importance of being part of the method.

“The continuity of routine should continue in case of war.” Astrid Villalobos is 56 years old and wears a red cap from the United Socialist Party of Venezuela. “Being able to go to work, to social work centers, to take the children to school,” she said.

She and hundreds, thousands, of Venezuelans are preparing in Venezuela to fight and defend themselves against a possible military invasion. The Tactical Method of Revolutionary Resistance consists in the learning of a series of military techniques adapted for all types of civilians without formation “to defend the homeland”.

Every Saturday, in groups of 200 people, they meet in a block adapted for classes at an agroecological school in the Caricuao neighborhood. These are 13 “tests” that must be learned, practiced and surpassed.

The first to be taught is a bit of war theory, which is explained in an improvised tent. How to move, how to act, how to protect oneself and who to trust if there is a war in Venezuela are one of the points to be taught.

They learn first aid, communication techniques, how to recognize venomous and non-venomous plants, self-defense techniques, how to identify an enemy, how to build a trap, how to camouflage or even how to shoot with weapons or how to resist the effects of tear gas. Astrid lives in the parish of Candelaria, a neighborhood in the center of Caracas known for its Spanish taverns and periods of street violence caused by opposition protests in 2014 and 2017.

RELATED CONTENT: How Long Can John Bolton Take This?

“We have been trained to defend our territory if we have another similar episode,” said Astrid. Her body and her age are not those of a young woman capable of anything, but she skirts the path full of obstacles with lightness. She has just jumped a tire at least 50 inches tall before explaining that “there are things that obviously can not or can not be done as easily as men or young people.”

“But it does not matter, because anyone can help, it’s not just physical work, we can give instructions or deal with intelligence for law enforcement,” she says.

Astrid describes the protocol of action they are learning in the event of an attack, either by a foreign agent – an American invasion – or by the opposing right.

“We have cooperating patriots in all territories and, in case anything happens, they would give a warning specifying what the irregular situation is. From there, we must evaluate how many individuals are they and how many are we, what arms do they handle [.. .] We took pictures and videos and transferred them to the state security forces. We always work together with them,” he describes.

Candelaria has tall buildings and its roofs are a weapon of war in favor of the people. “From there we see everything,” says the possible Venezuelan fighter Astrid.

Major of the Army Jesús Orozco is in charge of supervising the practice in Caricuao. He’s playful when he relaxes, but when he talks to his civilian apprentices, he’s nothing but military.

“Venezuela will not kneel for the empire. We are convinced that we are and will be a free country because we are heirs to the glory of Bolivar,” said Jesús Orozco.

The major knows that these people are a weapon of mass destruction. While the world underestimates them because of their appearance or age, Chavismo realizes the importance of having a loyal, faithful and respectful people of his legacy that gave them identity and resources to be class conscious and socialism.

“People do not know that a 50-year-old woman is more dangerous than the most powerful airplane or war tank in the world,” said the officer. “Because a war tank or an airplane emits heat and with any defense system can be destroyed. But a person in a house is capable of having a switch, for example, and that switch can be directed and cause an explosion.”