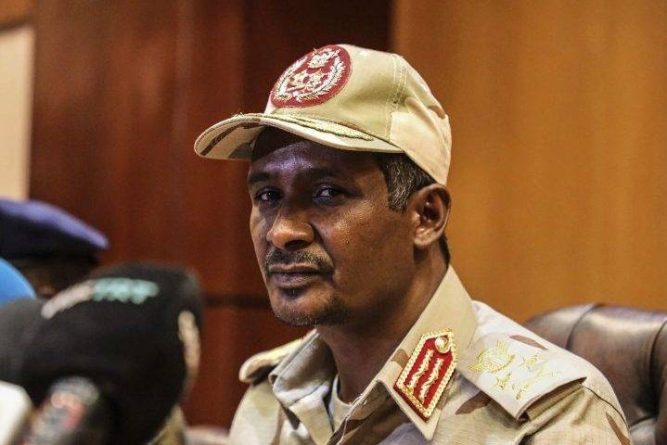 WATCH ABOVE: Why have civilians been killed in Sudan and what are protesters asking for?

A Canadian company has signed a US$6-million deal to lobby foreign governments on behalf of the brutal Sudanese military council, according to U.S. documents, whose forces have been accused of killing more than 100 protesters in Sudan.

A U.S. lobbying contract signed in May 2019 between the Montreal-based Dickens & Madson (Canada) Inc. and Sudan’s military council says the company will help lobby the governments of the United States, Saudi Arabia, the Russian Federation and others for “the beneficial development of your political aims.”

“We shall use our best efforts to ensure favorable international as well as Sudanese media coverage for you and we shall further undertake to obtain financing for you from the U.S., the Russian Federation and other countries,” the document says. “We shall also strive to obtain funding and equipment for the Sudanese military.”

Hemeti previously served in the RSF, formerly known as the Janjaweed, a militia group considered responsible for the genocide in Darfur about 15 years ago, estimated to have killed at least 200,000 people.

The firm is run by veteran lobbyist Ari Ben-Menashe, a former member of Israeli military intelligence, whose company has worked for the former dictator of Zimbabwe and the Libyan militia commander Khalifa Haftar, an alleged war criminal.

The company has also done work for the government of the Democratic Republic of the Congo, accused of serious human rights violations, and Papua New Guinea, which has faced widespread allegations of corruption.

Sudan is currently in the midst of a political crisis after protests broke out across the country over fuel shortages and high bread prices brought on by the government’s elimination of subsidies.

The protests continued until April, when the Sudanese military stepped in to remove President Omar al-Bashir from office. The military council and opposition groups originally agreed on a three-year transition to democracy, but talks broke down in May.

On June 3 soldiers and paramilitary groups opened fire on a pro-democracy rally in Khartoum, leaving at least 118 people dead, the Central Committee of Sudan Doctors said.

“We’ve witnessed the Rapid Support Forces’ despicable brutality against Sudanese civilians,” said Kumi Naidoo, secretary general of Amnesty International. “Sudan’s Transitional Military Council (TMC) must immediately withdraw the RSF from any policing … and confine them to their barracks in the interests of public safety.”

Global News phoned the company for comment on the contract but a message said the number was no longer assigned. The company does not have an website or publicly listed email address.

Ben-Menashe was also infamously linked to the resignation of Arthur Porter, the former chairman of Canada’s federal spy watchdog, over his business dealings. Porter quit the Security Intelligence Review Committee after the National Post revealed he once made a deal with Ben-Menashe on a $120-million aid-for-development initiative from Russia.

According to the lobbying contract, Dickens & Madson (Canada) said one of its main goals was to ensure the international community recognizes the military council as the “legitimate” leaders of Sudan.

“We shall strive, among other goals, to conduct lobbying, in the United States, the Russian Federation and other countries to assure that you attain recognition as the legitimate transitionary leadership of the Republic of the Sudan,” the document says.