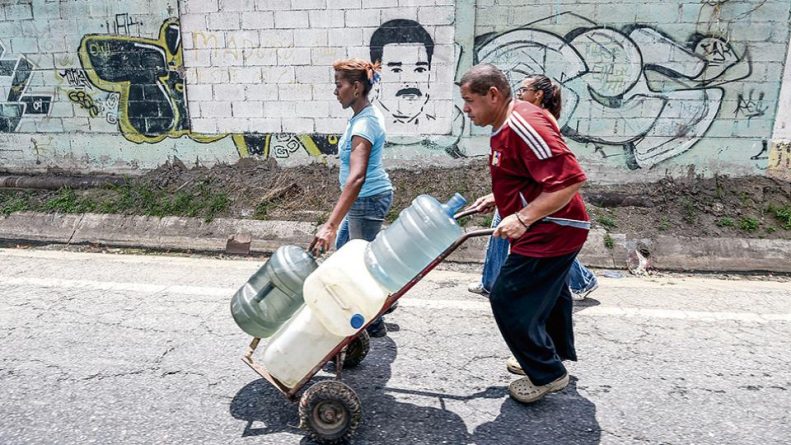 With social policies and collective initiatives in Venezuela

The State supplied water to the main points, such as hills and hospitals and guaranteed food distribution.

Caracas, March 13th, 2019.- The country has not flown through the air. It could have happened if you take into account the depth of the impact generated by the national blackout that began on Thursday at 5 pm and the supply has not yet been fully restored (in some parts of Venezuela’s countryside). The news this Tuesday is that in some places the light has just returned, as in the city of Maracaibo, or in the Commune El Maizal, in the state of Lara.

The consequences of the blackout were multiple, the ways to deal with them too. Both by the government and spontaneous initiatives. The policies, for example, were to supply tanker trucks in strategic places, such as hills and hospitals, and to guarantee food distribution through different mechanisms. It is about normalizing a country that was already in a situation of prolonged difficulties, after an attack of a magnitude still difficult to calculate.

The response could not cope with the magnitude of the demand, for example, of water, since the pumping system was affected by the blackout, which resulted in collective initiatives, such as opening a pipe in El Valle or San Agustín , working neighborhoods in Caracas, to fill bottles and bottles. There are many images of people queuing to get water in any place where it can be obtained, shops, filling places, cisterns, springs.

Faced with a situation of these characteristics, one could have expected a massive multiplication of spontaneous outbreaks of protest, violence, mobilizations, outside of what the opposition tries to summon. There were acts like looting, for example, in the Sambil shopping center in Maracaibo, where according to the mall’s general manager, it was a group of three hundred people who managed to knock down the main fence, façade and door until they entered the shopping center. There were several cases, although one can not speak of a picture that overflowed and massified in an unstable, dangerous scenario, due to the facts themselves and the calls for (looting from the opposition activists and politicians). The Attorney General informed that an investigation against Guaidó will be initiated for his alleged participation in the sabotage of the national electricity system.

The weather in the streets of Caracas during the day has been of concern, resolution, everyday life, restoration of shops, electronic payment systems, transportation, although the metro system is not yet active. Whoever arrives at the city does not encounter a devastating scene but with a scenario of accumulated and new difficulties, a Venezuelan idiosyncrasy that allows facing adversities in a surprising way for an outsider’s gaze, a chavismo activated in its dimension of popular government and organization, a tranquility in return marked by the awareness that nothing has ended, but that it is at the center of a national and international conflict.

This last dimension has been centrally on the table yesterday morning with the decision of the Venezuelan government, announced by Foreign Minister Jorge Arreaza, to end the talks with the United States for the establishment of offices of interest, and the order the US diplomatic staff to leave Venezuela in the next 72 hours.

On the other hand, the administration of Donald Trump included in the budget request for the year 2020, the sum of 500 million dollars for “the transition in Venezuela”, ratifying the policy and the probable prolongation of the conflict.

The technical mission of the Office of the United Nations High Commissioner for Human Rights of the United Nations (UN), which was received on Monday by the foreign minister and yesterday held a meeting in the National Assembly. In the next few days, according to the foreign minister, the UN mission will meet with institutions of the Bolivarian government and the public authorities.

In this context, they will prepare a report on the situation within a very complex context, where there are conflicting data, often without confirmation. The clearest case is that of the dead that would have caused the blackout: according to opposition spokesmen were first 17, then a journalist said there were 296, including 80 neonates, a figure that was later denied by the president of the College of Physicians of the Zulia state and it was not withdraw. The Minister of Health, for his part, affirmed that there have been no deaths in public hospitals due to the blackout.

Yesterday there were protests called by the opposition, although they only gathered a few hundred demonstrators. But the events move with great speed, the days overlap with the nights, and the confirmation of the facts always requires verification by different sources. The truth, we know, is one of the main victims in these contexts.