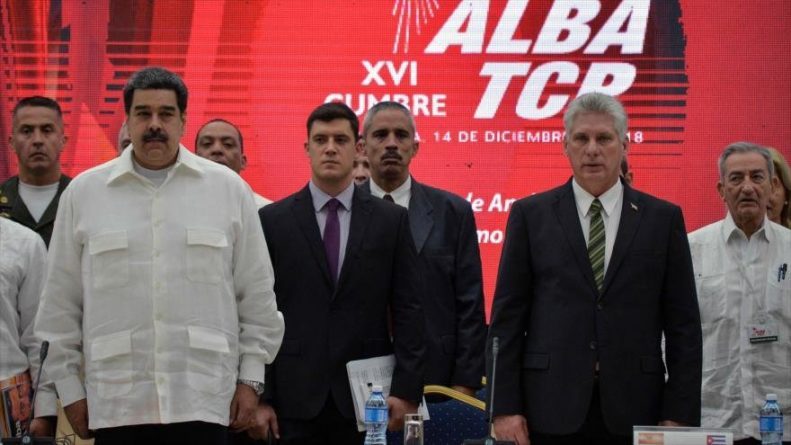 Ambassadors of member countries of the ALBA and several other nations expressed their support for Venezuela and repudiated the sabotage in which the Caribbean country is being targeted.

“The Secretary General of the Bolivarian Alliance for the Peoples of Our America (ALBA), (David Choquehuanca) along with the ambassadors of the countries that are part of this important Alliance and diplomatic heads of Russia, Palestine, China, El Salvador, Iran and Turkey on Monday expressed their unrestricted support for the government of President Nicolás Maduro, to peace in the region and respect for international law”, the Venezuelan embassy in Bolivia said in a statement yesterday.

The diplomatic mission also rejected the “new sabotage attack on the Guri hydroelectric dam , with the aim of undermining any attempt by the Venezuelan Government to achieve the stabilization of the economy and curb the insurrectionist situation that the United States and its dolphins try to run in the country. ”

In this regard, Choquehuanca said that the recent attacks against Venezuela are not isolated events, but represent a risk to the democracies and sovereignty of all Latin American countries.

The ambassador of Iran in Bolivia, Reza Tabatabaei, warned, for his part, that a possible military intervention in Venezuela would represent an urgent and sensitive problem for the world.

Venezuela is going through turbulent times after the US  On January 23, backed the self-proclamation of deputy Juan Guaidó, head of the Venezuelan National Assembly (AN), controlled by the opposition and declared in contempt in 2016, as interim president.

Since then, the White House has intensified a campaign that aims to destabilize the Bolivarian nation and that also contemplates the application of sanctions against  Venezuelan companies and authorities, the initiative to introduce “humanitarian aid ” by force -viewed by Caracas as a pretext for a military intervention in the Bolivarian country – and more recently the sabotage of the electricity supply system, which since last Thursday has caused blackouts throughout Venezuela.