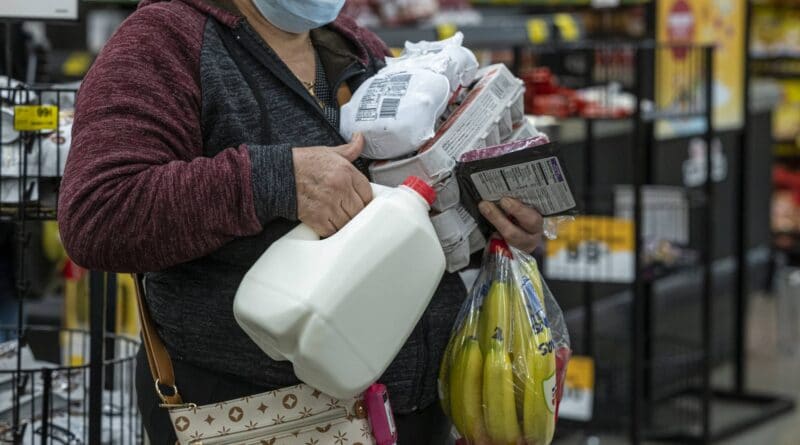 Caracas, May 8, 2022 (OrinocoTribune.com)—The Venezuelan Central Bank (BCV) reported this Friday, May 6, that for the month of April, the inflation rate was 4.4%, a significant increase in comparison to the 1.4% rate reported for the month of March. This is the eighth consecutive month with an inflation rate below 10%, the Central Bank (BCV) reported.

In addition, this marks the third month with an inflation rate of less than 5%, while the accumulated variation for the first four months of the year (16.3%) was the lowest observed for the month of April since 2014, and well below the 183.8% reported for the same period in 2021.

For many experts, the reported inflation is a consequence of the devaluation of the bolívar, which was devalued by 3% in relation to the US dollar. Alternately, other economists explain the rise in the inflation rate as a result of the supply shocks that the global economy is experiencing due to the conflict between Russia and Ukraine, as well as bottlenecks in global supply chains due to COVID-19.

Within Venezuela, opposition experts have recognized that, contrary to their warnings, to date the Tax on Large Financial Transactions (IGTF) has not significantly impacted prices. Therefore, the measures taken by the Venezuelan government to encourage the use of bolívars in economic transactions did not have the negative results that were anticipated, according to articles and broadcasts by numerous news outlets.

When examining BCV figures by sectors, it was observed that in seven categories the monthly inflation rate did not exceed the overall inflation rate of 4.4%, namely for alcoholic beverages and tobacco (0.8%), transportation (1.9%), communications (2.0%), clothing and footwear (2.9%), housing services (3%), health (3.5%) and goods and services (3.9%).

In contrast, an increase greater than the 4.4% inflation rate were reported in the sectors of rental housing (4.5%), home equipment (5.2%), food and non-alcoholic beverages (5.6%), leisure and culture (5.7), restaurants and hotels (6.2%) and education services (15.2%), according to the BCV report. This is similar to what Orinoco Tribune reported for the monthly inflation of March as a trend that was foreseen by many economists.

Meanwhile the anti-Chavista NGO, Venezuelan Finance Observatory (OVF), reported that the monthly inflation rate for the month of April was 3.6%, lower than the one reported by the BCV. In April, according to the NGO, the cost of the family food basket in Venezuela reached $381 US dollars, 31.51% more expensive than in April last year.

International scenario
In year-on-year terms (April 2021-April 2022), the inflation rate in Venezuela “remains the highest in the world,” at 222.3%, OVF added, as highlighted by many mainstream media.

In the overall monthly analysis, mainstream media consistently fail to mention that April inflation in Venezuela, despite being at 4.4%, more than tripling the 1.4% reported for March, is significantly less than the inflation reported for April by Argentina (6.7%), Turkey (7.25%), or India (projected to be 7.4%), for example.

Featured image: A shopper holds groceries while waiting to checkout in a grocery store in San Francisco, California, US, on Monday, May 2, 2022. Photographer: David Paul Morris/Bloomberg.