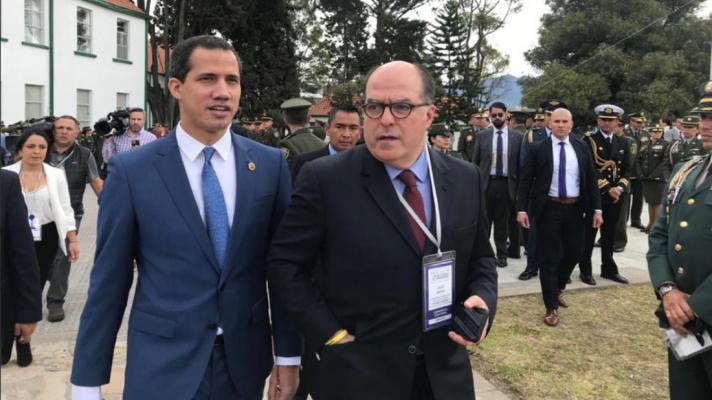 Justice First [PJ/Primero Justicia] conveniently omitted any mention of its own complicity in the crimes against Venezuela.

As negotiations progress between the government of Venezuela and the opposition in Mexico City, it is becoming increasingly evident that there is practically no consensus remaining in the well-known G4 coalition (PJ, Democratic Action, Popular Will, and A New Era) for the false “interim presidency” of Juan Guaidó.

Earlier today, the Justice First [Primero Justicia] party published a statement in which it washed its hands of the seizure and misuse of the assets of the Venezuelan State abroad, and assigned all responsibility to the Popular Will party and former deputy Guaidó.

This statement is linked to the recent news that the government of Iván Duque intends to take over the Monómeros company, a Venezuelan subsidiary of Pequiven (PDVSA) based in Colombia—an action endorsed by the former Venezuelan deputy Guaidó.

We reproduce here some fragments of the communiqué. Recall that the “National Assembly” that is mentioned herein is nothing more than the fake institution that this anti-Chavista faction attempts to continue supporting, in the midst of its evident decline.

For more than a year we have informed the country of our concern for the management of the Republic’s assets and companies abroad. Likewise, from the beginning of the interim government, we have repeatedly made proposals that were not taken into consideration and we express our disagreement with the way they are managed. We firmly reiterate that our intent is to protect assets from corruption, from creditors, and put them at the service of Venezuelans.

Thus, PJ claims that it only recently became aware of the extent of the corruption, although corruption scandals involving the shady “rule” of US puppet and former deputy Juan Guaidó have arisen constantly since 2019.

Given the lack of receptivity for Juan Guaidó and the representatives of the interim government responsible for this task, especially Popular Will, we announce our decision to no longer participate in discussions that deal with matters related to assets abroad. We withdraw, with the intent of facilitating and encouraging the realization of a solution that preserves assets for Venezuela. We will continue to raise our voice in the Delegate Commission of the National Assembly.

Featured image: Justice First ignores its own responsibility in the crimes against the Bolivarian Republic of Venezuela (Photo: File).