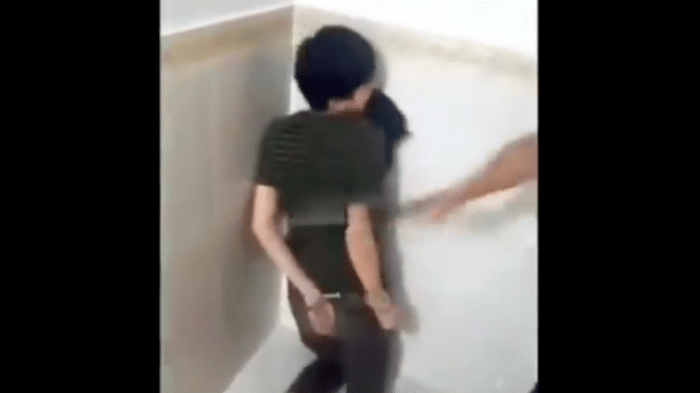 The odious right-wing influencer Ian Miles Cheong recently posted a video of a man being brutalized by an unseen tormenter which he captioned “Chinese communism”, adding “I don’t know who needs to hear this but this is what real oppression looks like, not cops in Portland pepper spraying rioters for throwing molotovs at them.”

There’s nothing in the video footage that shows that this is happening in China, nor that the person performing the abuse is a government authority figure. But many people credulously shared the video around, because anti-China sentiment has exploded over the last two years with the help of careful narrative management by the western political/media class.

"73 percent of Americans hold an unfavorable view of China, up from 47 percent just two years ago"

This video footage re-emerges periodically, like last year when it was shared by virulent China critic Arslan Hidayat, who claimed the footage showed the Chinese government’s persecution of a Uyghur Muslim.

Except it’s not from China, and the man being tormented is not a Uyghur Muslim.

It turns out it’s very easy to get people to believe they are viewing irrefutable evidence of Chinese abuses. All you have to do is show them video footage of one thing and tell them it’s something else, and as long as they’re already predisposed toward believing anti-China narratives, they’ll believe you.

Over the last few weeks I’ve seen three different verifiably fake videos depicting “Chinese” abuses which people have been frantically spamming around eager to show evidence of Beijing’s malfeasance, just in my own personal meanderings through social media.

HERE IS A SECOND GENOCIDE VIDEO:

Brits, we need 100K signs on petition in my tweet below to secure a Magnitsky debate in Parliament. Sign & RT

THIS IS NOT A DRILL

After this wildly viral video surfaced, my Twitter mentions were saturated with brainwashed Chinagaters tagging me insisting that I retract my position of rigorous skepticism toward western narratives about what’s happening in Xinjiang. They were certain they finally had me. There it is, video evidence as plain as day. Who could deny such a thing?

Only problem? That’s not Xinjiang, and those aren’t Uyghur Muslims.

And more fakenews about the Uyghurs made by the West.
Never trust the West!

The video is from 2017:
Crackdown on a pyramid scheme in Bijie, Guizhou, China (2000kms away from Xinjiang)
Link: https://t.co/6TngVdvnZX https://t.co/zsPPXNLpIe pic.twitter.com/IOviu9sDjb

My favorite was this one shared by the account “Uyghur Genocide” on Twitter, captioned “#China has been keeping a world record in techniques to torture prisoners & detainees, such as those 5+ million #Uyghur adults and children currently being held in China’s #ConcentrationCamps, prisons & slave-labor factories. This is one:”

#China has been keeping a world record in techniques to torture prisoners & detainees, such as those 5+ million #Uyghur adults and children currently being held in China’s #ConcentrationCamps, prisons & slave-labor factories. This is one:#America #Canada #Australia #GerogeFloyd pic.twitter.com/TVOw0m9lHG

The following are screenshots from a machine translation of a fact check piece from a Taiwanese website:

Obviously none of this in and of itself proves that Uyghur Muslims aren’t being mistreated in Xinjiang. What it proves is that there’s a lot of disinfo about what’s happening in Xinjiang, and that there’s a very large market of herd-minded dupes who are eager to swallow that disinfo with zero critical gag reflex.

Western power structures have a very extensive and extremely well-documented history of lying about just this sort of thing, so there’s no excuse for credulously believing what you’re told about any US-targeted government absent mountains of hard proof.

Refusing to believe western narratives put out against US-targeted governments doesn’t mean you automatically believe the opposite of those narratives or believe any Chinese narratives, it just means you remain agnostic until presented with proof that rises to the level required in a post-Iraq invasion world.

There’s a lot of geostrategic ambition riding on Xinjiang, since it plays a pivotal role in China’s Belt and Road Initiative which will upset unipolar US planetary dominance unless thwarted. Which of course means the west has a vested interest in disrupting China’s goals in that region, since US hegemony depends on keeping other nations down. Propaganda is being used to facilitate that agenda.

I Don’t Always Believe CIA Narratives. But When I Do, I Believe Them About China.

"China is such a curious anomaly in the narrative matrix. Many who are normally skeptical of claims by western governments immediately swallow anything said about China."https://t.co/1EtQOPOFee

The above videos are a good illustration of the power of narrative. People believe they’re seeing undeniable video footage of an atrocity being perpetrated by a specific government, solely because the bit of text over the video told them that’s what they’re seeing. They literally see what they’re told to see. The narrative overrides the actual raw data that they are taking in with their own eyes.

The only sane response to a situation that is swamped with propaganda and disinformation is to hold tight to skepticism and agnosticism until presented with hard proof. Get comfortable with not knowing, and don’t forget that the power structures presenting you with these narratives have lied to you before.

Stay skeptical. Stay critical. Demand hard, verifiable proof about any claim about any US-targeted nation, and if it isn’t given to you, don’t swallow it. This is how you keep your head clear of the propaganda.