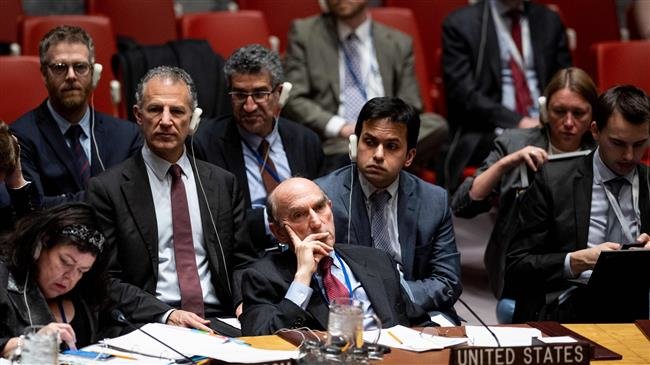 The member states of the Security Council of the United Nations Organization (UN) met Thursday to vote on draft resolutions presented by the delegations of the United States (US) and Russia on Venezuela.

With respect to the project promoted by the US, it obtained nine votes in favor, three against and three abstentions. The double veto of Russia and China decided that this interventionist proposal would not advance. The draft stated that last Venezuelan presidential election on May 20 2018 was not free and fair, requested immediate presidential elections and to allow the entry of the so called “US humanitarian aid”. Evidence presented by Venezuela indicates that some of the US Aid trucks burned before passing the border to Venezuela by molotov cocktails thrown by the “humanitarian volunteers” carried along with the aid a “kit for rioters” called guarimberos in Venezuela.

Here is the detail of votes for the US draft resolution, it is worth noting that the US barely reached the nine minimum votes required to pass a resolution:

In summary: 9 votes in favor, 3 against and 3 abstentions.

Venezuelan Minister for Foreign Affairs, Jorge Arreaza, in his last speech in front of the Security Council, mentioned the willingness of the Venezuelan Government to deal with all the options at a negotiation table if chosen, including the possibility of calling for early elections and always according to the Venezuelan Constitution, but he stated that it can not be a precondition for negotiations but something that comes out of a negotiation table among Venezuelans and not as an order from neo-colonial powers.

For its part, the Russian resolution had four votes in favor, seven against and four abstentions, so this initiative was not approved either. The Russian draft’s most important elements were the opposition to foreign interference in Venezuelan internal affairs according to the UN principles and the rejection of the use (or threat of use) of military force against Venezuela. Donald Trump, Mike Pompeo, John Bolton and Elliott Abrams have in multiple occasion on TV and in social media refer to the use of that option against Venezuela

Below the Russian Draft votes:

In summary: 4 votes in favor, 7 against and 4 abstentions.

Russia’s draft resolution was not adopted because of a regular voting protocol, while the US proposal was vetoed by Russia and China.