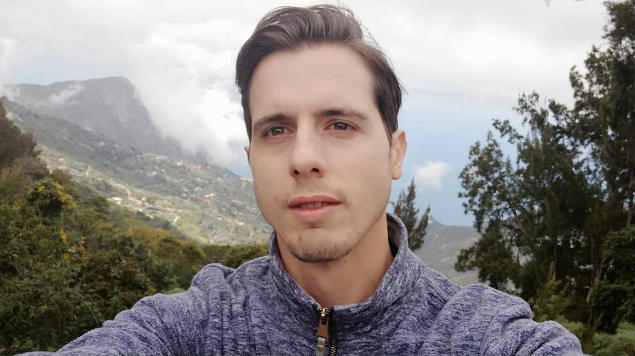 Diego Itursarry has posted almost 30 videos in his social networks in which the daily life of the Venezuelan capital is appreciated.

Argentine tourist Diego Itursarry dared to show a Venezuela that is banned in the mainstream media: its normality.

This man, of 38 years, who stayed almost for two months in the South American country, was encouraged to record a series of videos with the motto ‘My camera is my eyes’. He toured Caracas from end to end: he was in large shopping centers, open-air markets, supermarkets, hospitals and popular neighborhoods.

His video recordings, which he shares through his Twitter account and Instagram @DiegoEnLaLucha , as well as Facebook and YouTube as user “Diego Tw”, emerged after visiting a complex of state social interest housing. So far he has posted 29 clips about his tour, which have reached almost 100,000 views.

Diego, who lives in the city of Trelew, in the department Rawson, in the Argentine Patagonia, talks about Caracas with rare admiration. He considers that “it is the most beautiful city” that he has known throughout his travels, which have taken him to Brazil, Chile, Mexico and Uruguay.

Viral videos about Caracas
The Physical Education teacher, who is currently pursuing a degree in Political Science, is not the first to record videos that have become viral about that “humanitarian crisis” that the press has said exists in Caracas. Recent is the visit of the Spanish political scientist Arantxa Tirado and the American journalist Max Blumenthal .

Uploading to the networks what you have seen as a tourist earns you friendships from other parts of the world, but also attacks and recriminations. Those who question his videos have even asked him to go to prisons “to see reality”. Diego, who clarifies that he has not been financed by any organization or by the Venezuelan State, is surprised by this type of question: “Why is a tourist going to hospitals, popular neighborhoods or a garbage dump to film?”

RT: You were in the places where caraqueños tend to go, why do you think it is so strange to have found normality?

DI: It is so strange to have found normality because the media tells us in Argentina that there is chaos, that there is a deep humanitarian crisis and extreme violence in Caracas, that it is impossible to live in that city. Nowadays in Caracas, normality is news.

I compare the lies of the international media with respect to Venezuela with a big house of cards: one when taking out the cell phone, and showing with its camera what it sees, makes that house of cards begin to fall, because the lie is enormous.

RT: How do Venezuelans feel about Venezuela?

RT: Have you come to Venezuela before? How long were you on this visit?

DI: Yes, I had been to Venezuela before. On this visit I was there about two months.

RT: How did you move inside Caracas? Were you alone?

DI: I always drove by Metro, or taxi, on my own. Some have even told me that I had a driver and an escort.

RT: How did you deal with the issue of security? Did you have any incident?

DI: I had the precautions I take when visiting any city. I took out my cell phone to record in the Plaza Bolívar [in the historic center of Caracas], down the street, I also made videos in the boulevard of Sabana Grande, which they told me was very dangerous, in outdoor vegetable markets …

RT: How did the idea of ​​making the videos come about? Was it spontaneous or planned?

DI: The idea of the videos was planned. On the previous trip I was eager to make them. This time I thought I wanted to make a video and when I went to Ciudad Tiuna [urban housing development in Caracas] and saw such a titanic work, I decided to make them and show them to the general public.

RT: Were you funded by any organization, by the Venezuelan State? Who paid for your trip, stay and tours in Caracas?

DI: I am not financed, I finance with my own pocket: one saves, one goes on vacation. It was all paid for by me and with the money earned by my work in Argentina.

RT: Are your videos part of a project? Did you want to demonstrate something with them? You have published 28, how many are in total? Did you think they were going to go viral?

RT: Have you suffered attacks on the networks? Do you think that the users wanted to find in your videos stories more similar to those that the big media have?

DI: I suffered numerous attacks of all kinds in the networks, threats, simply for showing what I was seeing with my eyes. That’s why my motto is ” my camera is my eyes “. I think they get angry because they are looking for what they think of Venezuela to be reflected in the videos,  to not feel so cheated by the media.

There is a well-known phrase by Mark Twain that is one of my favorites: “It is easier to deceive a person than to convince them that they have been deceived”. Many people do not see that they are being deceived. Venezuela is a global scam, unprecedented.

RT: What other reactions have your videos generated?

DI: As a result of the videos, which have become so viral, people from around the world write to me constantly asking me to tell them how my experience in Venezuela was, how I paid for things.

RT: Do you think that a foreigner has a distorted vision of what he can find in Caracas?

DI: I do not deny that there is an economic crisis, but we must analyze the context, we would have to see why all media talk about Venezuela and do not focus on countries like Colombia, with a brutal humanitarian crisis, an impressive level of violence, Mexico or countries in Central America where there are really huge migrations. USA always sees dictators in those countries that have natural resources, all the time their officials are saying that we must put more sanctions on Venezuela. I do not understand how there are people who do not find the relationship between an economic crisis, of the magnitude that Venezuela has, and international sanctions.

Despite the blockades and sanctions, I see a normal life in Caracas, which makes me think that the State’s measures to protect the population are having an effect. We must remember that services in Venezuela are almost free. like the transportation of the Metro, gasoline is the cheapest in the world, there are food boxes that reach Venezuelan families, and part of the population receives government bonds. I do not understand why everyone says that you compare the Venezuelan minimum wage with what things cost.

RT: Did they ask you to go to garbage dumps, hospitals, popular neighborhoods?

DI: I have been asked to video tape everything, they asked me to film someone trying to check a trash can, I do not understand that level of request, I think they want to satisfy that need some have of not being cheated by the media. Also, you have to be honest, why would a tourist go to hospitals, popular neighborhoods or a garbage dump to film?

They told me to go to very poor neighborhoods to see the reality of Venezuela, to jails. How far is the hype level? As if there were no prisons and slums throughout Latin America, in the US, in Europe. I can not understand that request: try to film the worst I can find in a country to tell the world that this is the country where I went to do tourism.

I have been demonstrating that a tourist can go perfectly to Caracas and visit very beautiful places, have fun, have a great time, as simple as that. I do not know why it bothers them so much. In general, Venezuela is very warm, receptive for tourists.

RT: What differences did you find when walking through popular neighborhoods and middle class sectors?

I was surprised that in the popular neighborhoods, where I interviewed people, many have professional training, there are many university students, there are cultural activities, sports.

I saw a higher level of consciousness in the popular classes , a higher level of culture, of knowing very well what they are defending, what is happening with their country, what interests the US has. with respect to its natural resources.

RT: Were you surprised by what you found? How did you see the people from Caracas?

DI: I was surprised by what I found, anyone who goes to Caracas at this moment perceives that the contrast between what the media tell us and what one finds is so great …

Caracas surprises me every time I go. It is a very beautiful city, with beautiful landscapes, with gigantic parks, with a mountain that surrounds the city and a microclimate where it is not very hot or cold. I recommend it to all tourists who want to go. It is the most beautiful city I have known, until now, in all the trips I have made in my life.

In Buenos Aires there is a generalized bad mood due to the deep recession and economic crisis that Argentines are experiencing, there are entire families living on the street, lying on the floor, with their children asking for food or money. In Caracas I did not see it, it does not mean that there are not some, but honestly the contrast is very strong.

RT: Is there a humanitarian crisis?

There is not, no doubt, there are interests behind this trend of opinion that they want to generate in relation to the lie that in Caracas there is a humanitarian crisis.