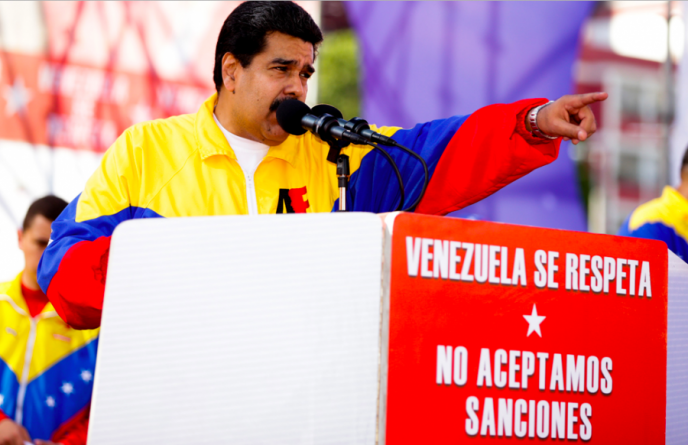 Tamara Taraciuk Broner of Human Rights Watch (HRW) and Johns Hopkins professor Kathleen Page took to the pages of the Washington Post (11/26/18) to whitewash Donald Trump’s successful efforts to make Venezuela’s economic crisis much worse.  Appropriately enough, at the end of the piece, the Post recommended four other articles (11/23/18, 9/11/18, 6/20/18, 8/21/18) that either attacked Venezuela’s government or stayed conspicuously silent about the impact of US economic sanctions.

Propaganda works primarily through repetition. The vilification of Venezuela’s government in the Western media has been relentless for the past 17 years, as Alan MacLeod pointed out in his book Bad News From Venezuela.

NGOs like HRW play an important role in framing the Western imperial agenda from a supposedly “independent” and “humanitarian” perspective, as dramatically illustrated after the death of Sen. John McCain (FAIR.org, 8/31/18) when several HRW officials joined the US media in sanctifying an overtly racist warmonger. In contrast, a few hours after Hugo Chavez’s death in 2013, HRW rushed out a statement vilifying Chavez’s years in office, displaying total indifference to his achievements in reducing poverty and improving health outcomes, despite the violent, scorched-earth tactics of his US-backed opponents to prevent this from happening. No such statement was rushed out by HRW to attack George H.W. Bush—the recently departed butcher of Panama and initiator of the decades-long mass slaughter in Iraq, to mention only a few of his crimes.

HRW has repeatedly invoked the impact of an economic crisis in Venezuela to call for more US-led “pressure” on Venezuela’s government, as was done by Taraciuk and Page. They wrote:

But most sanctions—imposed by the United States, Canada and the European Union—are limited to canceling visas and freezing assets of key officials implicated in abuses and corruption. They have no impact on the Venezuelan economy.

In 2017, the United States also imposed financial sanctions, including a ban on dealings in new stocks and bonds issued by the government and its state oil company. But even these include an exception for transactions to purchase food and medicines. In fact, the government has purchased food from abroad, but these efforts have given rise to corruption allegations.

The idea that “most sanctions” have “no impact on the Venezuelan economy” is appalling nonsense (FAIR.org, 3/22/18).  Trump has extended Obama’s cynically declared  “national emergency” over Venezuela, and escalated by directly threatening holders of Venezuelan government bonds, making it it impossible for Venezuela to “roll over” any bonds governed under US law (i.e., borrow to pay off principal when a bond comes due, as governments usually do). In January, a Torino Capital report on Venezuela’s economy stated that “all foreign-currency bonds are denominated in dollars, and all are governed by New York law.” Trump also prohibited the Venezuelan government–owned CITGO corporation, based in Texas, from sending any profits or dividends back to Venezuela.

The US allies Taraciuk and Page mentioned mainly provide propaganda cover for a US-led assault. Bear in mind that the United States, Canada and other countries within the European Union are supplying weapons and other essential military support to Saudi Arabia, even as it inflicts famine on Yemen. Why do you suppose governments barbaric enough to arm Saudi Arabia also target Venezuela with economic sanctions? Does concern over human rights and corruption, which Taraciuk and Page uncritically cited as a rationale, pass the laugh test?

It should be said that the financial sanctions the US has applied to Venezuela could not even be justified against Saudi Arabia which, unlike Venezuela, really is a dictatorship. In fact, Saudi Arabia is perhaps the most brutal and backward dictatorship on Earth, and one engaged in horrific aggression abroad. What would be justified against Saudi Arabia is cutting off arm sales and all military collaboration. That appears to be a real possibility in the United States at the moment, but recall that support for the Saudis may be funneled through Israel and other allies, as was done decades ago in Guatemala when the atrocities of US clients became overly embarrassing.

Francisco Rodriguez, the Venezuelan chief economist of Torino Capital and a longtime Chávez (and Maduro) government opponent, produced the graph below, which clearly shows the impact of Trump’s financial sanctions on Venezuelan oil production, which Venezuela depends on to get almost all the foreign currency it uses for trade. The piece Rodriguez wrote calling attention to this alarming fact was ignored by the media, according to a Nexis search done two weeks after it first appeared. Before the financial sanctions introduced by Trump, Venezuela’s oil production followed a similar pattern to Colombia’s: There was a fall in production following a drop in investment, due to the steep and sustained drop in oil prices that began near the end of 2014 and bottomed out in 2016.

However, after Trump imposed financial sanctions in August 2017, Venezuela’s oil production plummeted, while Colombia’s stabilized. The impact of US sanctions therefore became much worse, but also easier to calculate. It works out to $6 billion in lost revenue to Venezuela’s government in the first year after the sanctions alone, even if one assumes that Venezuela’s oil production would have continued to decline along its pre–financial sanctions path. That’s over 600 times more than the emergency aid the UN has just approved for Venezuela.

The “exception for transactions to purchase food and medicines” Taraciuk and Page pointed to in Trump’s financial sanctions is a laughable smokescreen. The sanctions deprive the Venezuelan government of billions of dollars to buy foods and medicine, regardless of whether there are dubious “exemptions” to illegal sanctions.

According to Datanálisis, an opposition-aligned pollster whose directors appear regularly in Venezuela’s private media, more than 60 percent of Venezuelan households received subsidized food and other basic products this year, through a government program known as CLAP (in its Spanish language acronym). Taraciuk and Page mention these “corruption allegations”—like the allegations that the government has used this system to “buy support”—to falsely suggest that what concerns the US and its accomplices are revenues lost to corruption (hardly a problem unique to Venezuela).

On the contrary, the US concern is that Venezuelan government revenues might benefit the public. The worry—apparently shared by apologists like Taraciuk and Page—is that the Maduro government has been able to retain popular support by responding to the economic crisis. Sanctions take direct aim at Venezuela’s population by denying the government the revenues to do that—a depraved objective, but consistent with the behavior of the governments of the United States, Canada, France and UK, which continue to arm Saudi Arabia.

In recent years, HRW officials have taken to calling Venezuela a dictatorship (CBC, 4/1/17). Pinning this label on Venezuela has been crucial to removing all legal and moral constraints on US policy. Taraciuk and Page refrained from using that label explicitly, but readers were clearly meant to get that idea:

Maduro’s government remains as opaque and repressive as ever. In January, the president called those who spoke out about the crisis “traitors to the fatherland.” His threat should be taken seriously in a country without judicial independence, where critics have been arbitrarily jailed and tortured, and hunger has been used for social and political control.

In fact, basic democratic freedoms in Venezuela remain at a level the US government would never tolerate were it faced with similar circumstances: a major economic crisis deliberately worsened by a foreign power that openly backs the most violent elements of the opposition. Just consider that, in far less dire circumstances, the liberal end of US opinion is either ignoring or viciously applauding the likelihood of Julian Assange being imprisoned in the United States for publishing government secrets. Aggressive Maduro government critics appear constantly in Venezuela’s private media. Francisco Rodriguez traveled all over Venezuela in May, campaigning for opposition presidential candidate Henri Falcón, whom he advised on economic policy. Rodriguez made numerous appearances in Venezuela’s media during the campaign in which he lashed out at Maduro’s government (examples here, here and here).

Falcón (defying US threats) launched his presidential campaign with a 35-minute speech on Venezuelan state media. In that speech, Falcón repeatedly called Maduro the “hunger candidate,” and said that it is now common to see Venezuelans looking through trash for food. Falcón said democracy has been destroyed, and that all Venezuela’s institutions are “slaves” to the executive, that Maduro’s government has made Venezuela into a “hell,” that Venezuela faces the risk of civil war. Falcon pledged the release of all “political prisoners” and demanded that the election be held at a later date. The election was then moved back a month to May 20.

In an interview on a large private network during the campaign, Falcón said that Maduro’s government was an “unscrupulous monster,” but also “beatable” if voters turned out. Unfortunately for Falcón, much of the opposition leadership not only advocated abstention to discredit the election, but also hurled wild accusations at Falcon, saying he was in cahoots with Maduro.

About 23 minutes into the interview, Falcón advised government opponents that it’s foolish to wait for a “military invasion to save Venezuela.” The contradictions and absurdity of the opposition’s discourse, including the moderate faction, beggar belief. One shudders to think what would become of such opposition figures in Paris or Washington, but you will be shielded from such considerations reading Western media—and from understanding why Maduro easily prevailed in the 2018 election, despite an economic depression. Most importantly, you’ll be prevented from understanding how the Western media’s lies and distortions over the past 17 years have allowed the US to now pose a grave military threat to a democracy.