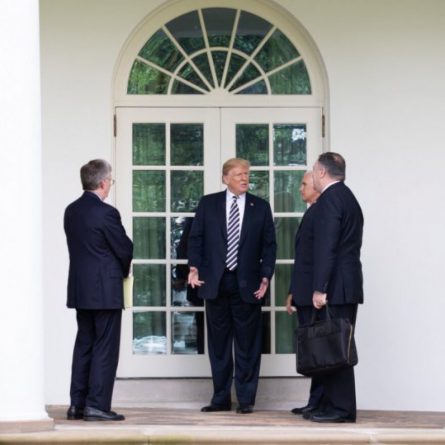 The US president is analyzing an alliance with Bolsonaro [Brazil] and Duque [Colombia] for a military incursion against the Maduro government.

LPO spoke with high-level sources in the team of a presidential candidate from the Democratic Party, who warned of a possible US military incursion in Venezuela. According to the advisers consulted, Donald Trump could ally with Jair Bolsonaro in Brazil and Iván Duque in Colombia to launch an attack against the regime of Nicolás Maduro.

A second high-level source in Washington informed LPO that since last Monday the CIA is recruiting new Spanish-speaking analysts, although he said there was nothing confirmed yet.

Last week Bolsonaro would have met in Washington with John Bolton, Trump’s national security adviser, and Stephen Bannon, former presidential strategist and main driver of the American Alt Right. The resignation yesterday of General James Mattis, Secretary of Defense, could be a worrying signal for Venezuela.

Mattis, who will continue as secretary of the US Defense until February, ignited the alarms in Washington and the rest of the world with his departure. For just under two years, it has served as a counterbalance to the most radical voices within the Trump administration, such as Bannon, Bolton, who has been advocating a military incursion in Iran for decades, or presidential adviser Stephen Miller. His departure could increase the possibility of a military incursion into Venezuela.

According to the sources consulted, Vice President Mike Pence would agree with the intervention plan.

With a population so demoralized, bombing two or three strategic buildings and take the Caracas airport is enough. They end up loading Maduro themselves, the source said, “the truth is distressing.”

In August of 2017, Donald Trump sent a very clear message to the Maduro regime when, standing in the gardens of the White House, he assured that he did not rule out “the military option” for Venezuela. The madurismo responded immediately. Defense Minister Vladimir Padrino López said it was an act of “supreme extremism.” Maduro tried to contact Trump that same day. The White House said in a statement that Trump had rejected the call and that “he will be happy to talk to the leader of Venezuela as soon as democracy is restored in that country.”

Maduro directly blamed the Trump administration for ordering the attack on his life last August, when drones with explosives exploded in an event where the president was. He said that Bolton had planned to “fill Venezuela with violence.” Bolton described Venezuela as members of the “troika of tyranny” in Latin America and warned that they would face them.

Earlier this month Maduro said there was a plan in place to assassinate him. “John Bolton is the head of Plan Venezuela, prepares several places where mercenary and paramilitary forces are being trained.”

He said the plan was put together in collaboration with Iván Duque and that he has “734 mercenaries, between Colombians and Venezuelans.”

“The government of Iván Duque is an accomplice of Bolton to bring violence to our country,” he said. He also accused the elected vice president of Brazil, General Hamilton Mourao, of participating in the plot.

“The departure of Mattis seems to point in that direction,” said the source consulted by LPO.