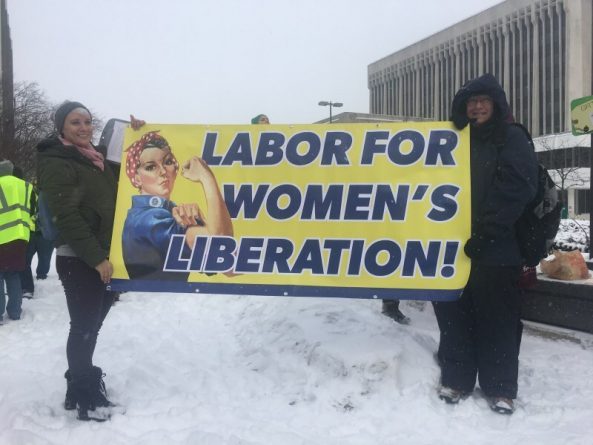 Grand Rapids, MI – About 500 people rallied and marched thru Grand Rapids, January 19, to build resistance to Trump during the 2019 Women’s March. The women’s movement in West Michigan hosted leaders from the immigrant rights, African American freedom, student and labor movements.

Many of the speeches were personal and heartfelt, detailing women’s struggles against sexual assault, workplace discrimination, and mistreatment at the hands of ICE, law enforcement and the courts.

“This month we celebrate the birthday of Martin Luther King, a man who unselfishly shared his dream of equality with us,” said Cindy Rosado, a Rapid bus driver, reading a statement by Amalgamated Transit Union Local 836. “Two years ago, many women marched on Washington DC to remind those in positions of influence that the strength and value of women as major contributors, i.e. champions of change, is not to be overlooked.”

Emily Butt, a Teamster from Lansing, explained, “High profile politicians like Trump and Kavanaugh are normalizing violence against women. Resistance by working-class women is a major part of the movement for women’s liberation in opposition to them!”

In 2019, the women’s movement in West Michigan continues to strengthen and build, sending a strong message to local reactionary Betsy DeVos. Secretary of Education Betsy DeVos, possibly the most disliked figure in the Trump administration, is infamous for attempting to roll back Title IX laws and protections won by women over many decades in education and sports.