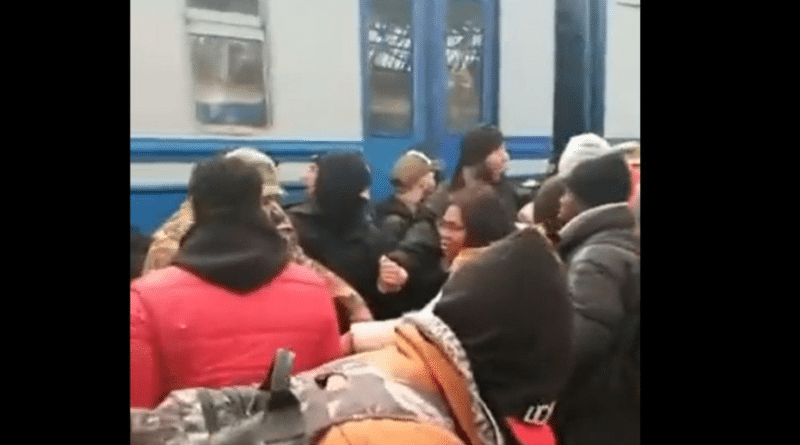 The situation in Ukraine is beginning to bleed into others, especially for the African and Indian foreigners who are currently trying to leave Kiev. This was the case for a group of Nigerian students who were refused passage at the train station, after the border guards alleged that they have to let the majority white Ukrainians board first.

Another Twitter user mentioned that the order on the trains is “children, women, white men, and then the Africans.”

RELATED CONTENT: Cuba Takes Position on Ukraine Conflict: “Russia Has the Right to Defend Itself”

The spokesperson for the Kremlin, Dmitri Peskov, has stated that the objective of the recent operation is that of demilitarizing and “denazification,” which means that Russia intends to free Ukraine from neo-Nazis, their followers, and their ideology. The racist treatment received by people of color attempting to flee the conflict is an indicator of the way that many people think in Ukraine, and is evidence of the need to protect this sector of the population.

Koko, a Nigerian medical student in Ukraine, shared via social media her terrible experience when she fled Dnipro, a city in the center of Ukraine, for Poland. She said that it took her more than 36 hours to travel the 960 km to the western city of Lviv, which normally takes 13 hours by car. She also commented that the group of women she traveled with encountered racial segregation as they boarded the train, due to the “whites first” rule.

“Ukrainians didn’t have to cue with us,” wrote Koko in another post. “They were prioritised and taken to the front of border control. Our cue only had non-Ukrainians. Who stood where was decided by the military.”
The situation of Indians
A group of Indian students was purportedly told “When your government doesn’t cooperate with us, why should we cooperate with you?” by border officials in Ukraine. The group of students was at the border between Ukraine and Poland, and have told reporters that they were rejected as they attempted to enter the country.

This has occurred after the government of India, alongside China and the United Arab Emirates, abstained from a UN Security Council resolution which condemned Russia’s military operation in Ukraine.