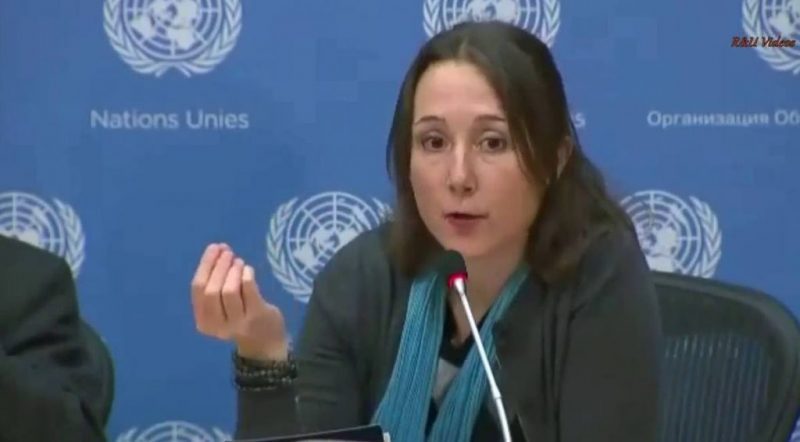 Eva Bartlett has recently returned from Venezuela where she aimed to observe the extent of the crisis there. She reported her findings in a public meeting organised by the Vancouver Peace Council attended by a large crowd eager to know.

Eva spoke frankly and showed videos she took of Venezuelans who also happened to be suffering the consequences of sabotage by the rightwing opposition/terrorists aside from the devastation caused by criminal unilateral coercive measures by the US and its allies – including Canada.

Her information contrasted widely from the untruths that the corporate media reports. Corporate media has been found lying blatantly when it comes to Venezuela with the intention of disseminating the US government official propaganda delegitimizing and demonizing the democratically elected president Nicolas Maduro.

At the time of writing CNN states that Juan Guaido – the self-appointed “president” – was “elected in January”. That is a blatant lie.
Eva received a standing ovation for her report that was obviously well received. As a Venezuelan who follows closely events in Venezuela, I can confirm her findings unabashedly.

But who is Eva Bartlett? Why can we trust her?

Eva Bartlett is an independent journalist, but that does not come close to explaining the real work that Eva does.

To value the real work she does as a journalist we need to understand the larger context. The 21stCentury has seen a powerful new tool in the war arsenal of imperialism that is used to force regime changes. That tool is called Infowar– that is, the production and use of misinformation and disinformation in order to undermine the legitimacy and credibility of a government. This usually precedes more violent armed conflicts. And it is usually courtesy of the US Empire.
We know that Eva is literally fighting this newest and fiercest war of the 21st Century – the Infowar.

She is a journalist that in order to report her stories she has to fight a system dominated by media corporations that in fact try to silence independent journalists like her with their armies of compromised mercenary journalists.

Infowar is just as dangerous as any other war. And Eva has had close calls. She has been imprisoned, and she has been threatened and attacked by trolls.

Eva can be outnumbered by journalists who are compromised with corporate media, but she makes up for that with her strong and truthful voice.
She is certainly not silenced.

Eva has done tremendous work as one of the few voices reporting from very dangerous conflict zones like Palestine and Syria where she lived a cumulative three years and has returned to Syria no less than 11 times. This shows her commitment and determination.

Eva has published her work in many media outlets that are open to the kind of truthful and unbiased reporting she does. She has published extensively.

She has been recognized and has received awards for her work.

How did she come to earn so much recognition?

To me one of her most important contributions as a reporter has been having revealed the true nature of the White Helmets. The White Helmets is a group embedded with the terrorists in Syria. The compromised media wants us to believe they are a humanitarian group. We have to remember that the Canadian government has decided to grant refugee status in Canada to members of this group.

Eva’s approach of reporting has always been to give a voice to the people she met to hear their stories and often their tragedies. This has certainly been true in her reporting from Venezuela.

As a Venezuelan, I am happy that Eva has turned her critical eye on Venezuela. I look forward to her strong voice speaking the truth about yet another country that seems to be under siege by the US Empire for no other crime than wanting to be sovereign and independent.

Eva is not one to be silenced!

Eva is fiercely outspoken against corporate media. I heard her once to put in his place one of the compromised journalists who questioned her observations in Syria and asked her this ridiculous question, “how do you quantify the support for the Syrian government; did you do any survey?” Eva replied, “How do I quantify the support? The Syrian people did in the election boxes with almost 80% votes for Hassad?

This is a close reminder of the situation in Venezuela today!

So Eva is not only an independent journalist; as a person, Eva is courageous and honest.

As a professional she is an outstanding journalist.

Venezuela has gained a new friend.