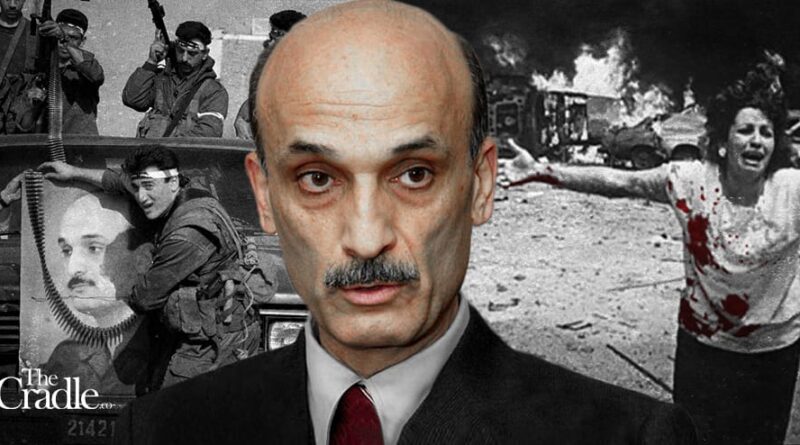 Notorious war criminal Samir Geagea has re-emerged into the Lebanese spotlight, ready to kick off another civil war in his bid for power. But might it be better to deny him the attention he craves?

The sectarian shooting of peaceful protestors last week in Beirut brought into focus, yet again, the name of Samir Geagea, leader of the right-wing, militantly Christian Lebanese Forces (LF) political party. Geagea’s name is synonymous with the history of Lebanon’s civil war – and with the horrific war crimes committed during those 15 years of strife.

While Geagea was by no means the only person with a proven record of war crimes, it is indubitable that his record exceeds that of other warlords during that brutal period – even by the standards of the right-wing militias which perpetrated many of the worst atrocities.

According to news reports last week, snipers loyal to the Lebanese Forces were responsible for killing six protesters in Tayouneh in Beirut, although later accounts, based on security camera footage, showed a Lebanese Army soldier firing the first lethal shot in the events of that day.

Both the Amal movement and the Lebanese resistance group Hezbollah held Geagea responsible for those deaths and injuries, and the Lebanese leftist daily, Al-Akhbar, published a photoshopped image of Geagea in a Nazi uniform, depicting a Lebanese Hitler. The Syrian Social National party called for the dissolution of the LF, originally an Israeli surrogate militia which later transformed into a political party after the 2005 release of Geagea from prison.

When Lebanon’s civil war erupted in 1975, there were several right-wing (Maronite-oriented) militias that cooperated with Israel and received Israeli military and financial support. But Bashir Gemayel the military chief of the Phalanges (a Lebanese Maronite-Christian militia), and son of Phalanges leader Pierre Gemayel, did not tolerate rival leaders in East Beirut, the area which fell under the control of right-wing militias during the civil war years. Bashir eliminated all rivals by force – sometimes through massacres, as in 1978 in Ehden against Tony Franjieh, and in 1980, against the Tigers militia of Dani Chamoun. During the war, Geagea was a chief lieutenant for Bashir Gemayel.

When the civil war began, Geagea, who hailed from a modest background in the town of Bshirri in northern Lebanon, was studying to be a medical doctor at the American University of Beirut. Geagea joined the Phalanges militia at the war’s onset (he never completed his medical studies although he is referred to as ‘Al-Hakim’ – the physician).

Geagea quickly became known for his brutality – and this within a militia noted for the war’s worst atrocities. All the most grotesque aspects of the civil war were pioneered by the Phalanges militia: massacres of thousands of civilians in Palestinian refugee camps, as well as in various Muslim and Druze villages; ethnic cleansing and sectarian killings on a massive scale which resulted in the forced displacement of hundreds of thousands of Palestinians and Muslims from East Beirut, and so forth.

It is noteworthy that Geagea and all senior members of Bashir Gemayel’s staff received training in Israel. Geagea mixed the right-wing ideology of the Phalanges with a version of fanatic Christian messianism; at some level, he viewed his bloody role in the war as being inspired by God. Geagea kept the members of his forces who, like him, hailed from northern Lebanon, in separate barracks, and Bashir Gemayel would call on them to undertake special missions when a massacre was required or a show of strength was needed.

Recordings from that period of Geagea talking to his fighters reveal a religious fanatic in a militia that comprised other fanatics. Geagea never really knew or cared to know ‘others’ in the country that he claimed to love and defend.

Ultimately, Geagea proved he could be pragmatic in politics, and when Bashir Gemayel turned his back on Syria (despite secret dealings with Syrian intelligence), his protege entered into negotiations with Damascus.

By 1989–90, Geagea was heading the Lebanese Forces after having toppled Elie Hobeika in 1985. Geagea then ignited a savage intra-Christian mini-civil war. The “war of elimination,” as it came to be known, was a vicious battle between forces loyal to Geagea and those loyal to General Michel Aoun, who positioned himself as president of the republic, despite his presidency being disputed in West Beirut and much of Lebanon.

Both sides in this intra-Christian war displayed a propensity for brutality but Geagea excelled in his disregard for the lives of civilians. He ruled his militia by instilling in his fighters a combination of fear and religious zeal. The war ended with the October 1990 intervention of the Syrian government, alongside US and Saudi support, which crushed the movement of Michel Aoun, who fled to the French embassy.

In that era, Geagea was on good terms with the Syrian government, something that he and his followers prefer to forget today.

In 1982, Geagea helped found a special force known as “Al-Sadm” (the strike), which he came to rely on heavily for dirty operations and assassinations.  In 1990, Geagea allegedly ordered the killing of Dani Chamoun, his chief rival within Maronite politics, who brimmed with the charisma that Geagea sorely lacked.

Knowledge about Geagea’s methods of rule and operation within his militia came to light during his trial in 1994, when he was convicted of the murder of prime minister Rashid Karami and other officials, for which he received four life sentences. By Lebanese benchmarks, the trial adhered to high standards and Geagea found it difficult to deny some of the charges against him. He was sentenced to death but his sentence was commuted by then president Elias Hrawi.

Geagea served 11 years in solitary confinement in the Ministry of Defense, where conditions are an improvement on most Lebanese prisons. During his time in captivity, his wife Sethrida took up the leadership position of the movement, and controlled the secretive coffers of the Lebanese Forces.

Geagea would only receive a parliamentary pardon in 2005, after the Syrian army was forced to leave Lebanon and the balance of power switched to the new March 14 opposition aligned with the US and Saudi Arabia. Geagea enjoyed the millions that he controlled in the treasury of the LF, and from money obtained by selling arms previously donated to his militia. He also quickly found new patrons in Abu Dhabi and Riyadh.

After last week’s Tayouneh killings, Geagea’s name has now resurfaced in a big way. But the nationwide attention on the person of Geagea may be highly exaggerated; the Lebanese Forces, after all, is not what it used to be.

The armed forces of Hezbollah, which are mightier than most Arab armies around Lebanon, are pitted against the LF, both domestically and geopolitically.  Since 2005, Geagea has been closely aligned with the Saudi and UAE governments, along with the US. The Saudis and Emiratis foolishly see him as a counterweight to Hezbollah, although the demographic and political weight of Lebanon’s Christians – as a sect in a sectarian country which measures people by their numbers – have substantially decreased.

Furthermore, western governments do not need reliable Christian political clients when many Muslim clients are willing collaborators. The old Christian–Muslim divide is not as politically salient as it used to be, especially as Gulf states are leading the way in normalization with Israel. Their clients in Lebanon simply follow their lead. As example, France’s alliance with Sunni Muslim Rafiq Hariri and Druze Walid Joumblatt was closer than its relations with Christian politicians in Lebanon.

If anything, Saudi and US documents released by Wikileaks show Geagea as a desperate man. He is caught offering his services – and his men – to the US embassy in a 2008 leaked document, and asking for arms in return:

Geagea said he wanted to make sure Washington knows he has between 7,000 and 10,000 well-trained Lebanese Forces fighters who could be mobilized. “We can fight against Hizballah,” he stated with confidence, adding, “We just need your support to get arms for these fighters.’

A Wikileaks Saudi document shows him pleading for money; the Saudi ambassador to Beirut makes a request to Riyadh on Geagea’s behalf, saying the LF is “the real force that he relies on to deter Hezbollah.”

An informed Lebanese journalist says that Saudi Arabia has severed funding to all the country’s political parties with the exception of the Lebanese Forces. The UAE government also favors Geagea and showers him with cash. Both Gulf states – perhaps at the behest of Israel – bank on him as a possible counter-force against Hezbollah. The US, instead, relies primarily on the Lebanese Army to counter Hezbollah – a comical idea for those familiar with the notoriously incompetent and ineffective Lebanese military establishment.

In a televised speech on Monday, his first since the Tayouneh massacre, Hezbollah Secretary General Hassan Nasrallah zeroed in on Geagea, without naming him once. Nasrallah warned the LF ‘leader’ against dragging Lebanon into civil war, and emphasized his concern that Christians could be put at risk with Geagea’s folly.  Nasrallah reminded Geagea that Hezbollah commands an army of 100,000 men, just in Lebanon alone – many times the 15,000-strong LF troops.

But Geagea is not a free agent, and never was. He started his militia career implementing Israel’s agenda, and is today reduced to following orders of staffers at the UAE and Saudi embassies in Beirut. Nasrallah made reference in his speech to the “foreign allies” of Geagea, without identifying them.

The danger in focusing attention on Samir Geagea is that it may unwittingly aide his quest to emerge as the ‘defender’ of Christians in Lebanon, a role he clearly seeks to craft by confronting Hezbollah.

It is a tactic that has worked before: In 1975, the PLO and the Lebanese National Movement focused intently on the danger of the Phalange party, without developing a strategy to appeal broadly to Christians. Within a year, the Phalanges went from being one of several Maronite-oriented parties to becoming the most powerful political force among Maronites since Lebanon’s 1943 independence.

Geagea is not an effective national political leader who can appeal to people across the spectrum, but has proven to be a good political organizer since transforming his LF militia into a political party. His party made big gains in the 2018 Lebanese elections, and his inflammatory actions today may be in preparation for the upcoming March 2022 vote.

But Geagea also harbors illusions of military grandeur and sells his foreign funders the fantasy that only he is capable of destroying Hezbollah. This is a notion so thoroughly removed from reality that Geagea risks being reduced to a caricature of his own self during the war years.  This comedic aside, however, does not minimize the danger he can inflict on Lebanon  in the months ahead through reckless, sectarian mobilization and agitation.

As’ad AbuKhalil is a Lebanese-American professor of politics at California State University, Stanislaus, since 1993. He is the author of several well-received books on West Asia and publishes the popular Angry Arab blog. As’ad holds several degrees from the American University of Beirut, and received his PhD from Georgetown University. He has taught at Georgetown U, Tufts U, George Washington U, and is also a visiting professor at the University of California in Berkeley.