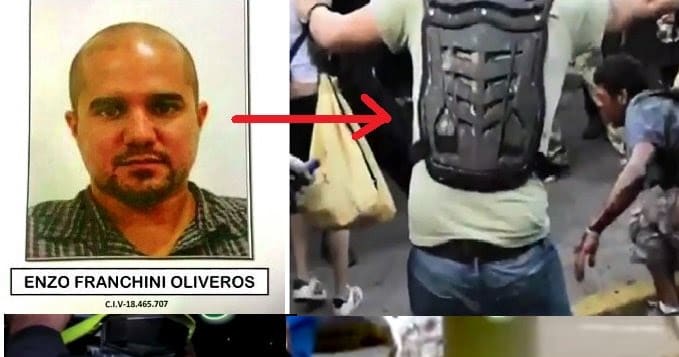 Who protects the murderer of Orlando Figuera, the young man burned alive in Altamira by anti-chavistas terrorists in 2017? His mother claims that those responsible have been removed from the country. In this post we present some data about Enzo Franchini Oliveros identified by the SEBIN in June 2017 as the alleged responsible person.

He is a construction entrepreneur who ran a family business called Oficina Técnica Franchini Oliveros, contractor of public and private works, including Odebrecht, the Brazilian corporation involved in a global corruption scheme.

The man was identified by Venezuelan intelligence from videos and photos taken at the scene of the crime, where he is observed opening a space for the attack and giving the order to turn on Figuera, from a motorcycle captured by the cameras. This led to his capture.

The track took the SEBIN (intelligence agency) to the house “Virgen del Valle” on Humboldt Street in Los Palos Grandes, a municipality of Chacao, residence of Franchini, where the motorcycle was located. Here is the video about the operation published by the journalist Boris Castellanos.

However, this is not the only time that Franchini has had conflicts with the law and has inexplicably left without justice applied. In February 2015, he used a backhoe to “settle” a dispute over boundaries between two buildings on Tártago Street in La Castellana.

In the incident Franchini charged with the demolition machine against the Qta. Marujita and knocked down a wall, while the owner of the property Fernando Goncalves shot at the backhoe with a shotgun and the bouncing shot wounded Franchini in the feet.

In the incident, both men were charged but the Public Ministry on that date decided to dismiss the criminal action against Franchini and accused only Goncalves for the alleged attempted homicide of the man who according to videos ordered the burning of Figuera.

Enzo Franchini was in charge of the demolition and refurbishment of a parcel where he planned to build a multi-family condominium his company had been hired to develop by the brothers Elías and Taoufik Ahmar, a real estate group from Aragua State.

The conflict arose because the urban regulations for multifamily use required a minimum area that could only be reached if the developers took over a corridor that gave access to the two houses built decades ago by the parents of the current occupants.

The owner of the land, according to court records is “Administradora Yacober 2010”, represented by Rita Bertoni Obayi and Elma Yacoub Karam who have acted against judgments that recognize the possession of the Goncalves family and urban decisions of the Chacao municipality.