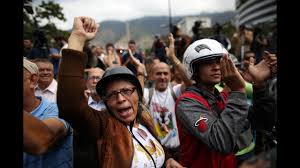 Violence has broken out in Venezuela as opposition groups, led by Juan Guaido, attempt to bring in foreign aid against the will of President Nicolas Maduro. Despite international support for Guaido, a fiercely loyal minority of Venezuelans known as Chavistas are determined to keep Maduro in power — and the U.S. out. Special correspondent Nadja Drost and videographer Bruno Federico report.

As we reported, there was violence on the Venezuela-Brazil border today, as opposition groups try to bring aid into Venezuela.

There is also a confrontation brewing on Venezuela’s western border with Colombia, where American-supplied aid is waiting to flow into Venezuela.

Juan Guaido, the opposition leader the U.S. recognizes as president of Venezuela, is hoping to push supplies across that border tomorrow. So far, that aid is being stopped by the government of President Nicolas Maduro, who still enjoys substantial support inside the country.

Tonight, with support of the Pulitzer Center, special correspondent Nadja Drost and videographer Bruno Federico take us to meet some of those still pledged to Maduro and to what they call the revolution, led by his predecessor, Hugo Chavez.

At a subway station in Caracas, volunteers ask passersby to sign a petition demanding the United States keep its hands off of Venezuela.

In the last three days, this team has collected 9,000 signatures.

We want to support our president with signatures. We don’t want them to take him out, because Maduro is really the president. How can they take him out when he legally won?

For the six million of 20 million eligible voters who voted for Maduro in national elections last year, it is unfathomable that the president of the opposition-led National Assembly, Juan Guaido, might get away with assuming the presidency of Venezuela.

And while backing for President Nicolas Maduro has plummeted across the country, he still manages to count on a swathe of the population for support, particularly in poor areas like Antimano, that benefited from the largess of Maduro’s predecessor, Hugo Chavez.

Here, Chavismo, the brand of socialism popularized by Chavez, is still a force, strengthened in reaction to the growing power of the opposition, backed by the U.S. and over 50 other countries.

Communal council leader Reina Lira guides us through this neighborhood center, a cornerstone of community organizing and government services. It offers residents preschool, Internet, and classes, like this exercise group for grandmothers. People wait their turn for a basic medical consultation and eyeglasses, Chavismo in action.

Now I can see, thanks to the revolution.

Lira and many other Chavistas suffer the same hardships as anyone else, but they don’t necessarily blame Maduro. The president and many of his followers have blamed the economic crisis on an economic war waged by the U.S. in an attempt to destabilize the country.

Even when they are attacking him in a brutal way, blocking him economically and with all the goods that can’t arrive, President Nicolas is putting in his best effort. He doesn’t make food expensive. He tries to raise salaries, and he gives us subsidies.

Projects that benefited the poor didn’t exist when Lira grew up. She remembers Christmas without gifts, and not eating three meals a day. But she saw her life and her neighborhood change for the better after Chavez became president.

As the poor, we were re-vindicated. We became able to study, when, before, we couldn’t. Venezuelans didn’t have immediate medical attention, and when the revolution came, they had a doctor at their side.

Many Venezuelans continue to credit Chavismo with redistributing the country’s oil wealth through social programs, and giving the poor a voice in Venezuelan politics.

But the economic crisis has been a crisis for Chavismo support. Maduro’s followers are a minority, but a passionate one. For Lira, her debt to Chavez guarantees her continued support for the government.

I think those of us who have stayed loyal to the revolution are those who feel the motherland in our veins. The love for Chavez and for the revolution can’t be bought.

The more the revolution is threatened, and the greater the efforts to unseat Maduro, the more dedicated their support of him.

Ronny Gutierrez is a welder in the neighborhood. His work clothes belie his other duty, heeding the call to defend the revolution.

We go about as civilians without anyone noticing us. You come here and don’t know I’m a militia. That’s how I surprise the enemy. I come from behind and disarm them. That is our work.

Every Saturday, the volunteer militia do training exercises, but, today, hundreds of them march through the streets of Antimano, sending a message by their sheer numbers.

Last year, Maduro announced a campaign to raise the number of militia to two million to confront the United States. The large civilian militia is an annex to the military, open to anyone, even those lacking military training.

A schoolteacher during the week, Captain Luisa Yaguara has both ideological and military training behind her. She doesn’t want a military invasion, but says she and nearly two million militia are ready.

We will arm men and women, so that no Yankee boot steps here, and he who does, dead he will be.

The strong U.S. support for Juan Guaido’s efforts to take the presidency from Maduro and concern over threats to national sovereignty can bring even those critical of Maduro to the side of defending his right to the presidency, says sociologist Margarita Lopez.

Sectors who have been loyal to Chavez become unified. There are some dissidents and critics of Maduro who won’t support the opposition because the opposition has been bought off by imperialism.

Yet it’s the Chavistas who are most unyielding. In a stronghold of Chavismo, the neighborhood called 23rd of January blankets a Caracas hillside. It was from here that thousands of residents came down the hills to confront the police when Chavez was captured in an attempted coup d’etat in 2002.

Today, their Chavismo is partly defined by the way the community has organized to resist the economic crisis. In the face of food scarcity and skyrocketing prices, this community has created a project to try to guarantee its own food security, involving farmers outside of Caracas to grow crops and sell them directly to the community, avoiding the use of intermediaries, so the community can buy their goods at lower-than-market prices.

And, as you can see, it’s a very popular option. About 1,000 families come to this market every week.

Ana Marin is a leader of a Chavista neighborhood collective that started the market. Marin says the poor did better until the economic crisis hit.

The crisis came. The economic blockade, sanctions, and internal corruption that means that a lot of government policies don’t reach the people.

Nevertheless, they are ready to defend what they gained from the revolution.

If the opposition takes over the government, we are not afraid. We will keep resisting, because we are going to defend our accomplishments.

Far down the hill, in Central Caracas, near the presidential palace, home to Maduro for now, coveted by Juan Guaido, Maduro backers on motorcycle taxis gather. The head of this group, Gustavo Martinez, says the current threat to their president has put them on the alert.

We carry out permanent monitoring in this municipality and at the national level. It’s vigilance to defend the peace of our people, so that no one from the opposition puts on riots and disturbs Venezuela’s peace. Us motorbikers, we are ready.

Amid all the uncertainty of who will govern Venezuela and how, one thing is certain. Chavistas won’t let the government be toppled without a fight.

Reporting from Caracas with Bruno Federico, I’m Nadja for the “PBS NewsHour.”