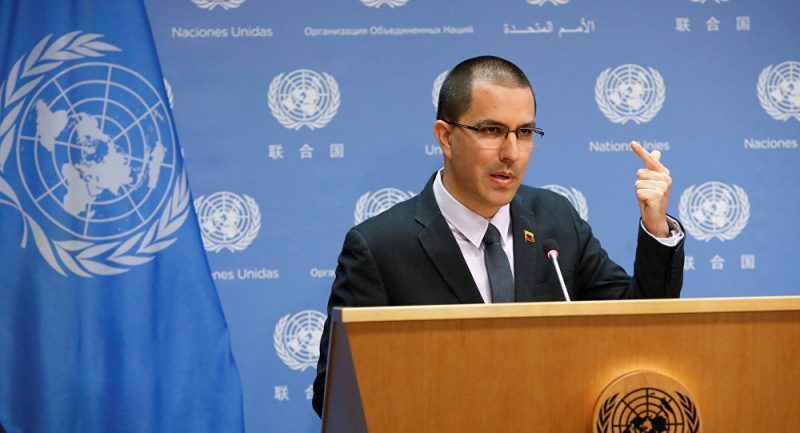 Venezuela and a group consisting of 60 member states of the United Nations (UN) that support the country, are evaluating seven specific points for the protection of peace and stability of the nation, said the Minister for Foreign Affairs, Jorge Arreaza at a press conference from the UN headquarters in New York. “With the Group of Member States of the United Nations, we have worked on seven concrete actions that will be developed over these weeks, in favor of peace and self-determination of peoples,” Arreaza said in statements transmitted by Telesur.

In this regard, he advocated that the countries that signed the United Nations Charter at the time and that comprise this international body respect the basic principles of sovereignty and self-determination.

“We know that there are countries that do not respect it, that threaten others with the use of force, countries that intervene permanently in internal affairs, that do not respect the self-determination of peoples. They are hypocrites, since they sit in the United Nations, sit in the General Assembly, however, they do not respect these principles. Therefore, today is the time, when aggression threatens the stability of the world and the peace of the peoples, this is the moment to ratify, to confirm, to defend the peace and sovereignty of the countries,” he emphasized.

In this regard, he said that he spoke with the Secretary General of the UN, António Guterres, about the situation that exists on the Colombian-Venezuelan border and the attempt of a military intervention by the United States under the assumption of “humanitarian aid ”

“We talked to the Secretary General, we updated him on this dangerous operation, on propaganda on the Venezuelan border, on this violation of international law without the authorization of the United Nations, without the International Red Cross, as they intend to force theoretical humanitarian aid into Venezuelan territory without having complied with the most elementary principles of that purpose. The General Secretary is attentive, is heeding, and will be in constant communication with us. ”

During his address, Arreaza said that the Secretary General showed his concern about the situation. He asserted that Guterres “is opposed to any threat with the use of force, to any situation of war in Latin America and the Caribbean, which is a zone of peace.”

New meeting with Elliott Abrams is planned
Arreaza also confirmed on Friday that Venezuelan representatives have held two meetings with the United States (US) emissary in Venezuela, Elliot Abrams in New York. He noted that they are in dialogue with the US and expected “a meeting soon with the US envoy, Elliott Abrams and there the future of diplomatic relations between the United States and Venezuela will be discussed”.

“Hopefully we can meet during these days that we are in New York. A pending meeting that was suggested by Elliott Abrams and I will be able to specify an answer to your question. It will depend on the gestures of both parties, on the respect of both parties have towards each other. Sometimes it is difficult to negotiate with the US when it is meddling every day, “said the Venezuelan diplomat.

In this regard, he noted that in the last meeting he had with Abrams -responsible for several interventions in Latin America, such as those that occurred in El Salvador in 1981 and in Nicaragua in 1989- Arreaza made him see that the attempted coup in this moment against Venezuela “had failed”, and that it is time to return to the negotiating table.

“This has been a victory. In the last meeting with the American envoy, we told him: The coup failed! We negotiate, “Arreaza said.

Pemon indigenous injuries do not correspond to military weapons
Arreaza also said, in response to questions from journalists, that the Pemón Indians injured in incidents that occurred this Friday morning in the south of the country were not injured by military weapons, as was reported. “What you mentioned that happened today (February 22) in the state of Bolívar (south), does not correspond to the weapons used by the Bolivarian National Armed Force (FANB). Some are wounded by knives, machetes, even arrows,” the minister told reporters.

Previously, the president of the National Constituent Assembly, Diosdado Cabello, indicated that the cartridges of the bullets that were fired in the events registered in the morning in a sector located an hour from the border with Brazil, did not correspond with military equipment.

“It is being demonstrated by the type of cartridge, that there are violent groups led by Mr. Américo De Grazia (deputy), led by people of Voluntad Popular (opposition political organization) and the truth will come out,” he added.

The incident in the state of Bolivar was recorded in the morning hours, when indigenous people confronted a group of soldiers who allegedly blocked the road to prevent their passage to Brazil.

Despite the declarations of Cabello and Arreaza, the Ministry of Health of the Brazilian state of Roraima (northeast) reported in a statement that seven Venezuelans admitted to the General Hospital after suffering gunshot wounds in Venezuela are in serious condition. The seven “have wounds caused by firearms and their health status is considered serious, being that three of them are in a more critical situation,” the statement said.

Minister Arreaza indicated that the opposition seeks to fabricate facts to hold the Government responsible for “killing their people.” Similarly, he called on the media and international news agencies not to lend themselves to violence, or otherwise, he said, they will end up with their hands stained with blood for “justifying and creating the conditions for a intervention”.

Arreaza offered these statements, while border countries such as Brazil, Colombia and Curaçao have prepared collection centers with food and medicine shipments donated by the United States and Costa Rica, to be sent to Venezuela. The Government of Venezuela has said that it will not allow its entry.