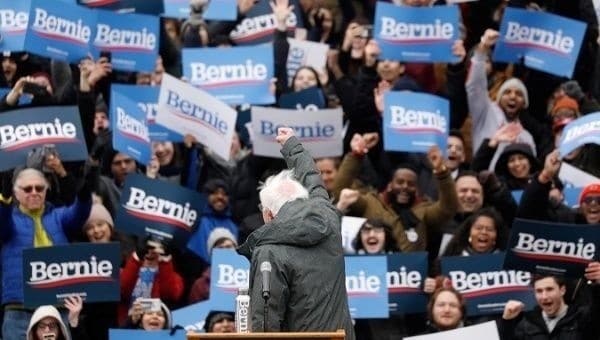 Over 20 percent of Bernie Sanders’ supporters said they would not vote for other Democratic candidates if the senator loses the primary.

A new Emerson Poll discovered that almost 20 percent of supporters of second-time presidential candidate Senator Bernie Sanders would vote for the United States President Donald Trump during the 2020 presidential election if Sanders doesn’t win the primaries.

The poll also showed that Sanders is ahead of former Vice President Joe Biden who has been accused of harassment by multiple women. Almost 29 percent of respondents want Bernie to win and 24 percent want Biden.

If South Bend Mayor Pete Buttigieg won the primary, 21 percent of Sanders’ supporters would vote for Trump whereas 26 percent said they would do the same if Elizabeth Warren wins, 18 percent if Beto O’Rourke wins, and 17 percent said the same would happen if Kamala Harris wins the primary.

RELATED CONTENT: Pompeo Talking About Regime Change in Iran: “Do You Think I Would Tell You?” (Video)

Of all the supporters of the top Democrat candidates, Buttigieg’s gave Trump the lowest approval rating at zero percent. Many of his supporters i.e., 43 percent are also most likely to identify as independents.

While Buttigieg, Harris, O’Rourke, Warren, and Sanders have a support base of people who either hold graduate or postgraduate degrees, the poll revealed that Joe Biden’s support base mainly includes people who did not go to college.

A number of analyses after the 2016 elections showed that many of Bernie Sanders supporters did not vote for Hillary Clinton who won the primary, paving way for Donald Trump to become the president of the country.