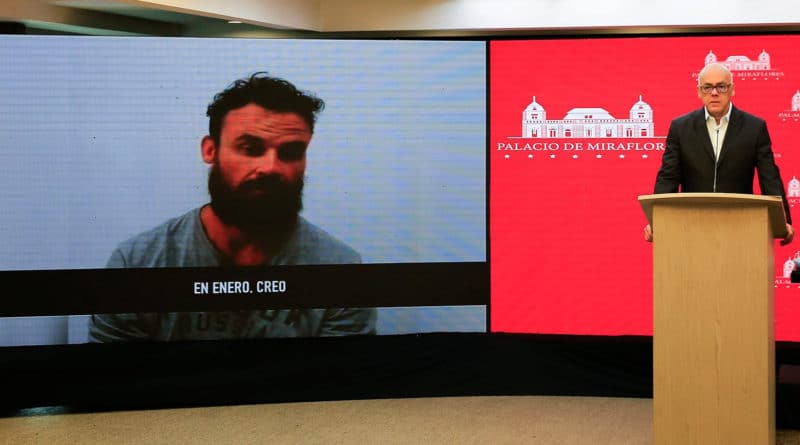 Twenty-three mercenaries participating in the frustrated incursion on Venezuelan coasts with the objective of kidnapping or killing President Nicolás Maduro, have been captured as of noon on Thursday in the joint actions of the Bolivarian National Armed Forces, the Militia and organized communities, the Minister ofa Communications and Information, Jorge Rodríguez, reported this Thursday. He presented a video with the testimony of the second captured US mercenary, Airan Berry, who pointed out that the objective of the mission was the assassination of President Nicolás Maduro.
“All the coastal towns are activated to continue hunting for mercenaries who may be trying to flee the national territory,” said Rodríguez, who presented more data on the mercenary maritime incursion against Venezuela.
In his video testimony, Berry, who carried out missions in Iraq in 2003, 2005 and 2007, explains to the Venezuelan authorities that “the objective of the mission was to assassinate Maduro and fulfill specific objectives.” In another video, he stated that his mission was to take the Maiquetía International Airport and the La Carlota International Airport to allow the free passage of foreign aircraft, which would land for the kidnapping and extraction of President Nicolás Maduro to the United States.
Likewise, the removal of the president of the National Constituent Assembly (ANC), Diosdado Cabello, was planned, the Executive Vice President of the Republic, Delcy Rodríguez, the sector vice-president Tareck El Aissami and the minister for Defense, Vladimir Padrino López, among other high officials.

The mercenaries had planned missions to Miraflores Palace and the headquarters of the General Directorate of Military Counterintelligence (DGCIM) and the Bolivarian National Intelligence Service (Sebin).

RELATED CONTENT: Is Juan Guaido Being Sacrificed? Revealing the Key Politics of the Failed Mercenary Incursion
Berry is 41 years old, enlisted in 1996, spent 17 years in the United States Special Forces, and specialized in attacks on confined sites. He confirmed that he worked for Jordan Goudreau, of Silvercorp, a company hired by Juan Guaidó to carry out the coup in Venezuela.
Rodríguez said: “It is going to cost the Trump administration a lot to get rid of the responsibility that it has, because investigative processes have already been opened in Congress and in courts of the United States of America,” he emphasized from the Miraflores Palace, referring to as reported by the Associated Press recent inquiries made by members of the US Congress to the State Department about Goudreau’s plans.

The AP journalist questioned by Venezuelan journalists for his apparent connection with the mercenary plot, Joshua Goodman, released a letter on Thursday signed by Senators Christopher Murphy, Tim Kaine and Tom Udall, to Secretary of State Mike Pompeo and National Director of Intelligence Richard Grenell, asking them to report what they knew about the attempt to capture Nicolás Maduro. “The failed raid, led by two former green berets, potentially violates US law and opposes support for dialogue to end Venezuela’s standoff ,” Goodman said.
Berry arrived in Colombia in January and joined Luke Denman, another of the hired mercenaries, and was received by Antonio José Sequea in Riohacha for the purpose of training terrorist deserters in three camps located in Riohacha, on the Colombian north coast, where he met the drug trafficker Elkin López, aka “Double Wheel”.

He also confirms that the person who led and had the most knowledge of the incursion into Venezuela was the terrorist Antonio Sequea Torres, who coordinated the action in Caracas with the drug trafficker José Alberto Socorro, alias “Pepero”, procuring vehicles and the weapons arsenal in La Guaira.

Rodríguez added that the investigations make clear the direct link between President Iván Duque; Colombian drug traffickers, the DEA (US anti-drug office) and groups of the Venezuelan right with the training of terrorists in Colombia.

RELATED CONTENT: Russia: “Actions of Mercenaries Trying to Enter Venezuela to Carry Out Attacks Deserve Unconditional and Decisive Condemnation”
Rodríguez considered it important for the North American media to investigate the fact that it was possible for planes to leave the United States or Colombia and then go to the United States without perfect knowledge on the part of the US aeronautical authorities, the board of security of the American State or of the White House itself.
In any case, he stressed that “this investigation is in full evolution and the whole truth will be known. The testimony of the captured terrorists allows more and more rapid progress in an investigation that Venezuelan intelligence agencies had already been undertaking,” he said.

These developments compromise Juan Guaidó, Iván Simonovis and other members of the right with Colombian drug traffickers like Elkin López, alias “Double Wheel,” he said.
López was developing, together with the so-called “Los Giraldo” clan, a strong confrontation against the criminal band “Los Urabeños” on the Caribbean Coast for control of the area and the handling of drug trafficking and extortion, Rodríguez explained. López Torres “is a drug trafficker, responsible for more than three dozen murders in Colombia, he is a butcher,” he said. 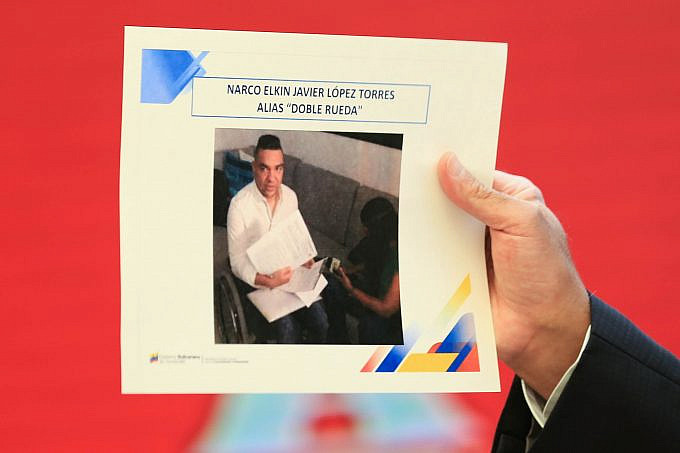 Likewise, he presented the interview of this Wednesday by journalist Fernando del Rincón to JJ. Rendón (Juan Guaido’s “strategist” based in Colombia) on CNN en Español, where Rendón confirms that he signed the contract with Silvercorp.
This Wednesday, President Maduro presented the first testimony of the former US green beret, Luke Denman, who affirmed that he would receive a payment between 50 thousand and 100 thousand dollars to undertake the terrorist action called “Operation Gideon.” “I was hired to get to Caracas, secure an airport and follow the plan. My mission was to take an airport until they could safely transfer Maduro to a plane to the US,” said Denman.

Featured image: Minister Jorge Rodriguez in a press conference on the latest US uncovered operation in Venezuela. Photo by Prensa Presidencial.