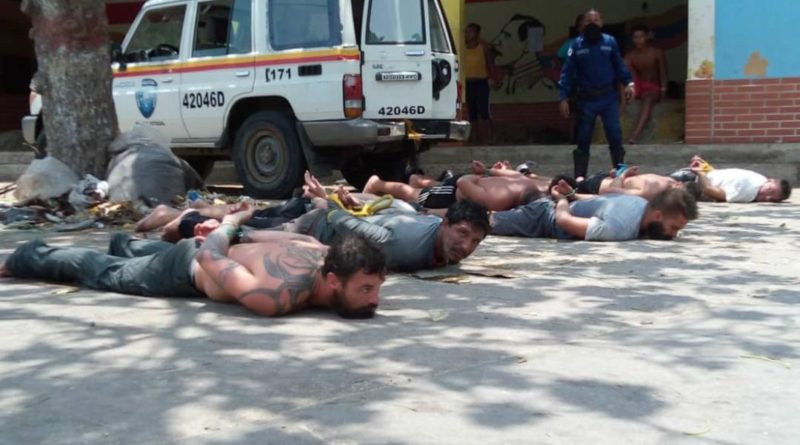 Mérida, May 7, 2020 (venezuelanalysis.com) – The United States government has opened a probe into army special forces veteran Jordan Goudreau in connection to a thwarted invasion attempt off the coast of Venezuela, the Associated Press reported.

The head of the Miami-based private security firm Silvercorp claimed a leading role in the paramilitary operation which sought to topple the Maduro government. On Sunday, a group tried to disembark in La Guaira, just north of Caracas, before being neutralized by the Venezuelan armed forces. On Monday, a second group surrendered in Chuao, Aragua State.

The Venezuelan government has reported that eight combatants were killed and a total of 23 captured after an additional ten alleged militants were taken into custody on Wednesday and Thursday. Two US citizens, former green berets Luke Denman and Airan Berry, were among those detained.

An unnamed US law enforcement official confirmed to AP that an investigation into Goudreau for alleged arms trafficking was in its early stages, though it remained unclear if charges would be brought.

A cache of US $150,000 worth of weapons and tactical equipment manufactured by a Miami-based High-End Defense Solutions was seized in Colombia in late March. Retired Venezuelan Major General Cliver Alcala, who reportedly ran training camps for Venezuelan deserters in Colombia, claimed responsibility for the stockpile, which he said was destined for a military expedition. AP previously reported that Goudreau visited the Florida headquarters of High-End Defense Solutions, which is owned by a Venezuelan family, in November and December allegedly to source arms.

US President Donald Trump said Tuesday that the failed paramilitary plot “has nothing to do with our government.”

However, speaking to reporters on Wednesday, US Secretary of State Mike Pompeo appeared to backtrack on the president’s remark, clarifying that “there was no US government direct involvement.”

“If we’d have been involved, it would have gone differently,” he said. Pompeo added that Washington will “use every tool” to secure the return of Denman and Berry. He also confirmed that the administration had knowledge of “who bankrolled [the operation],” which he pledged to “unpack…at an appropriate time.”

RELATED CONTENT: China Will Not Accept Any US Invasion in Venezuela: Spokeswoman Hua Chunying

Miami-based Guaido advisor J.J. Rendon confirmed that the opposition contracted Silvercorp’s services in October 2019 for an agreed US $213 million.

The opposition strategist was tapped by Guaido last August to head a “strategic committee” charged with plotting regime change scenarios, including kidnapping Maduro and other top Venezuelan officials. Rendon said the committee went with Silvercorp in September after meeting with other paramilitary contractors who demanded as much as $500 million.

Rendon claimed that the opposition later broke contact with Goudreau after he failed to deliver on promises of “800 men” and other sources of funding.

Goudreau supplied a copy of the contract in an interview with hard-right journalist Patricia Poleo. The Washington Post expose included a copy of the attachments as well.

While the contract only refers to Silvercorp providing “services” such as “strategic planning,” “equipment procuring” and “project execution advisement,” the attachments explicitly mention that project completion amounts to the “exit/removal of current Venezuelan regime and entrance/installation of recognized Venezuelan government.” It also states that Goudreau’s company would “assist and advise” Venezuelan military exiles in “planning and executing an operation to capture/detain/remove Nicolas Maduro and install […] Guaido.”

The attachments contain further details of the payments to be made to Silvercorp, including covering a loan and making payments “in barrels of oil” in case of insolvency. The company would continue to serve an eventual Guaido government in “counter-terrorism,” “counter-narcotics” and other areas.

In video-taped interviews conducted by Venezuelan authorities, Denman and Berry shed further light on the objectives of the failed mission. Both men confirmed that the operation had the goal of seizing Maiquetia airport in La Guaira where aircraft would land for transporting Maduro to the US. In addition to taking Miraflores Palace, Berry added that targets included the headquarters of the state’s intelligence and counterintelligence arms, as well as La Carlota Airbase in east Caracas.

Goudreau, for his part, told the Washington Post that the operation is “ongoing,” accusing the Guaido-led opposition of betraying its commitments. Guaido has denied any relationship to Silvercorp or Goudreau.

Featured image: A second group of combatants were captured off Chuao, Aragua State on Monday. (RCamachoVzla)