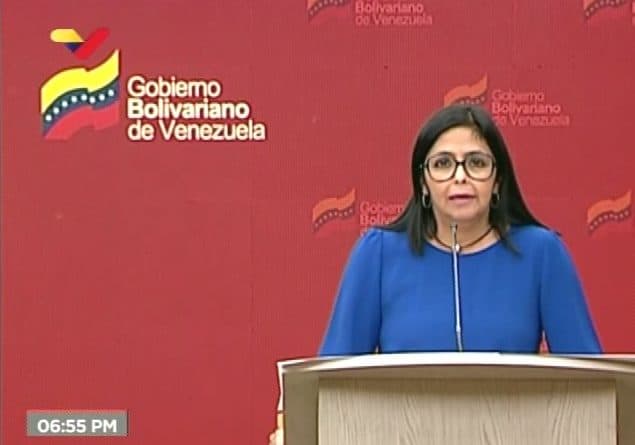 The vice president of Venezuela, Delcy Rodríguez, reported this Monday night 29 new cases of Covid-19, a disease caused by the SARS-CoV-2 coronavirus. Twenty-one of these cases are members of the Nueva Esparta state coastal custody National Guard command, who became infected from the outbreak at the Roberto Vahlis baseball academy. Another 7 cases are from the Miranda state, four of them linked to the security company that provides services to Empresas Polar, and a last case is from the Portuguese state. In total, there are 285 positive cases of Covid-19 in the country and 10 deceased people.

The vice president reported the death of a 67-year-old patient, who had been in intensive care since April 4. He had had symptoms since March 13. On March 30, he entered a private clinic, but his condition worsened and died. She expressed her condolences to family and friends, and thanked the health personnel who fought hard for this person’s life.

Regarding the case of the Roberto Vahlis baseball academy, she pointed out that 21 new cases were identified this Monday in Nueva Esparta state: they are members of the Bolivarian National Guard (GNB) who work in the entity’s coastal surveillance command. The cases stem directly from the baseball academy hotspot, although she did not provide further details at this time. Five of the 21 Covid-19 cases announced by Jorge Rodríguez on Sunday were also GNB officers, Rodríguez explained.

With the cases discovered on Monday, 63 people are infected by what happened at the baseball academy.

The vice president explained that, on the flight from Avior from Maiquetía to Nueva Esparta on March 13, the mayor of the Maneiro municipality of Nueva Esparta state (which is one of the outbreaks of infection in the state) and a scout who was going to the baseball academy in Nueva Esparta. The next day, a meeting was held at the baseball academy where 70 people participated. There, one of the athletes was signed to play for the Philadelphia Phillies. At that meeting 4 people with Covid-19 were present. From the Roberto Vahlis baseball academy, two new foci are derived: one through the coastal surveillance command, and another by the Acevedo municipality of the Miranda state, because one of the academy’s youth, who was hired by a US Major League Baseball team, went to celebrate at his home located in that locality, already being infected.

Governor Héctor Rodríguez has been disinfecting the municipality since early Monday and sweeping all the inhabitants with rapid tests, the vice president reported.

She reiterated her complaints regarding the irresponsibility not only of the owners of the academy, but also of the governor of Nueva Esparta, Alfredo Díaz, since officials of the institution visited the baseball academy on March 22 and April 6, and allowed it to continue operating. She stressed that “there is a lot of money” moving behind the academy and MLB teams.

Cases in the Miranda state

Rodríguez also reported other cases of Covid-19 in Miranda state:

RELATED CONTENT: Cuba and COVID-19: Cuban Trained Doctor on Bronx Frontlines and Cuba Calls for Cooperation Despite Political Differences (2 in 1)

Portuguese state
In the Portuguese state, one case is of a 51-year-old woman who performs household chores. She had contact with a patient, a neighbor of this person who had been infected in Cúcuta and infected her. She presented symptoms on April 11, with fever, malaise and respiratory distress. She is asymptomatic at a Comprehensive Diagnostic Center (CDI).
Figures
The vice president pointed out that 18,696,572 people have answered the survey of the Homeland System on Covid-19. Of these, the need to visit 170,718 people in person has been determined, and 169,365 people have been visited so far.

She mentioned that the protector of the Táchira state, Freddy Bernal, held a meeting on Monday with Colombian authorities, in order to fine-tune strategies to combat the pandemic, due to the fact that on April 27 that nation plans to relax the quarantine. He highlighted that 5 babies have been born among the thousands of people who have entered Venezuela through the Táchira state, complying with a strict protocol and a mandatory 14-day quarantine.

Social distancing (quarantine) will continue
On the other hand, the executive vice president reiterated the importance of abiding by the current social quarantine, as well as the use of the mask and the measures progressively announced by the National government. She said that the cases have not reached the hospitals, but that “we have reached the cases, as a result of the investigation, of the plan of President Nicolás Maduro to cut the chain of contagion.”

“We ask for the greatest collaboration of all, because the faster we detect cases, the faster we can advance on the disease and we can take satisfactory health measures for people who have been infected by Covid-19,” exhorted the vice president.